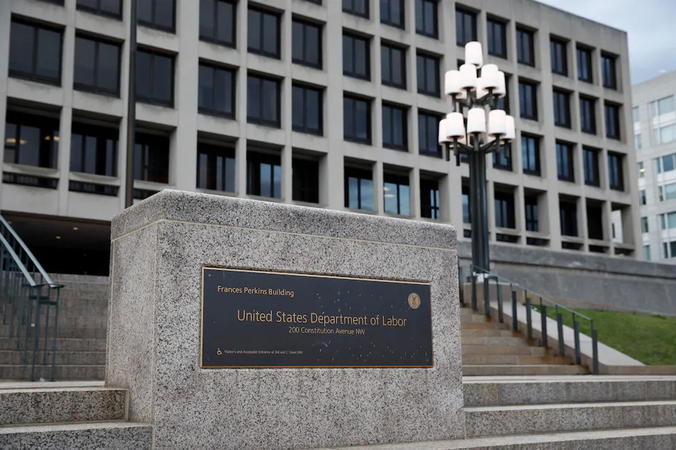 WASHINGTON - A government watchdog said in a new report out Tuesday that the Labor Department "significantly broadened" an exemption allowing millions of health-care workers to be exempted from paid sick leave as part of the law Congress passed in March to help workers during the coronavirus pandemic.

Congress passed the Families First Coronavirus Response Act back in March to ensure workers at small and medium sized companies were able to take paid leave if they or a family member became sick with coronavirus. The law exempts health-care providers as well as companies with more than 500 employees.

But an Office of the Inspector General report noted that a move by the Labor Department to more broadly expand how they categorize health care providers ended up leaving far more workers without a guarantee of paid sick leave than the agency's estimate of 9 million.

While existing federal statutes define health care workers as doctors, someone practicing medicine or providing health care services, the Labor Department's exemption from paid sick leave included anyone employed at a doctor's office, clinic, testing facility or hospital, including temporary sites. The report also found the agency also exempted companies that contract with clinics and hospitals, such as those that produce medical equipment or tests related to Covid-19, the OIG found.

The report also suggested that the Labor Department is not doing enough to enforce the paid-sick-leave provisions, as well as its existing laws on pay and overtime issues.

In an effort to be socially distant, the federal agency acknowledged it has been foregoing fact-finding, on-site investigations, where an investigator examines all aspects of whether an employer is complying with federal labor laws. Instead the agency has been using so-called conciliations, which are telephone-only reviews limited to looking into a single issue affecting one or a few employees, with no fact-finding.

Critics of the Labor Department more hands-off approach to the pandemic have seized on the report as another indication of the ways in which the Trump administration has abandoned its commitments to worker safety.

"The Inspector General's report makes clear that the Department of Labor went out of its way to limit the number of workers who could take emergency paid leave," Rep. Robert Scott, D-Va., the chairman of the House Education and Labor Committee, said in a statement. "This absence of meaningful enforcement of our nation's basic workplace laws creates a major risk to workers who are already vulnerable to exploitation amid record unemployment."

Actions taken to enforce the sick leave provisions in the Families First Coronavirus Response Act have skewed even further away from investigations: 85 percent have been resolved through conciliation.

The agency's Wage and Hour Division responded to the OIG's findings, noting that they were "developing and sharing models for conducting virtual investigations," and they also pledged to maintain a backlog of delayed on-site investigations to be tackled when it was safer to conduct those reviews.

But critics suggest the pandemic alone is not sufficient excuse for the drop-off in investigations, some aspects of which could be done remotely.

"These numbers just look so different than the numbers that I'm used to seeing in terms of conciliations versus investigations," said Sharon Block, a senior Obama administration labor department official. "It really does jump out. That 85 percent is just a really big number."

The issue about expanding who gets to opt out of offering paid sick leave has been the subject of complaints, according to the OIG report, as well as a federal lawsuit filed by New York Attorney General Letitia James. That lawsuit argued that the Department of Labor overstepped its authority by defining health-care providers in such broad terms, saying it could be skewed to include workers like teaching assistants or librarians at universities, employees who work in food services or tech support at medical schools, and cashiers at hospital gift shops and cafeterias.

Federal Judge Paul Oetken, of New York's Southern District, struck down Department of Labor's definition, as well as three other provisions last week - but confusion remains about whether his ruling applies only to employers in New York.

In an internal response to the OIG report, that predates the New York ruling, the Labor Department said that it agreed with many of the OIG's recommendations and that it would continue to use its definition of health-care providers until the resolution of the federal lawsuit.

The Department of Labor did not reply to requests for comment about whether it planned to contest the judge's ruling, or the other findings in the report.

The Inspector General pointed to other ways that the Department is not doing enough to adjust to the challenges of the post-pandemic world.

The OIG report said that while the agency's Wage and Hour Division referenced the coronavirus in an operating plan in late May, it pointed out that the division "focuses more on what the agency has already accomplished rather than thinking proactively and describing how it will continue to ensure FFCRA compliance while still maintaining enforcement coverage," the report noted.

The DOL did not provide any goals about the enforcement nor provide any requirements for tracking and reporting the new violations created by the FFCRA.

"With the predicted surge of covid-19 cases nationwide in upcoming months as more Americans return to work and as a consequence, an anticipated increase in complaint call volume to WHD, it would be expedient of the agency to devise a detailed plan as to how it intends to address this issue," the OIG noted.

The report is the latest to spotlight the Trump administration's employer-friendly approach to worker safety and protections.

The Occupational Safety and Health Administration, the part of the Department of Labor which investigates and is charged with upholding worker safety, has been criticized by workers and advocates for failing to issue citations for worker safety issues during the pandemic in significant numbers. It had only issued four citations out of more than 7,900 coronavirus-related complains according to figures from July 21.