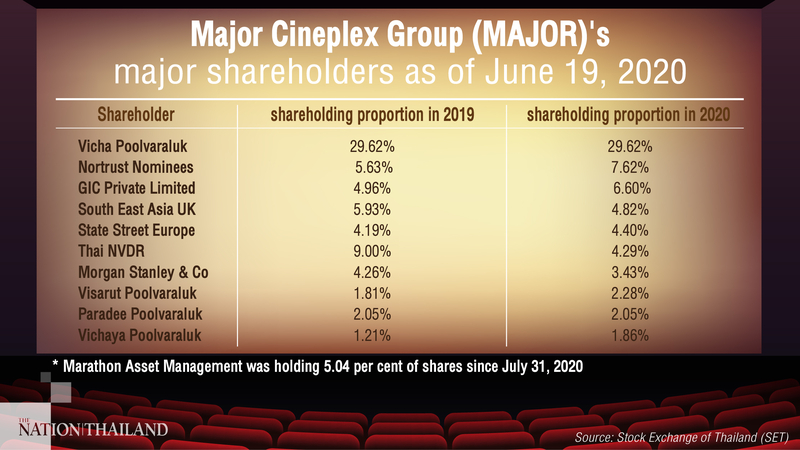 Foreign institutional investors were buying Major Cineplex Group (MAJOR) shares amid the Covid-19 crisis, as its share price recovered faster than its base price, experts said.

MAJOR was one of the businesses affected the most by the Covid-19 pandemic. The company faced a loss for two consecutive quarters, especially in the second quarter when the government imposed lockdown measures, causing the company to lose Bt475 million compared to a profit of over Bt500 million in the past five years.

The company's net loss in the first half of this year totalled Bt730 million.

On August 5, Marathon Asset Management, a London-based asset management firm, bought 5.04 per cent of MAJOR shares until it was listed in the top five major shareholders, however Thai NVDR has decreased its shareholding proportion from 9 per cent to 4.29 per cent.

Dithanop Vattanawakin, an analyst at Capital Nomura Securities, said foreign institutional investors were buying MAJOR shares because its price had dropped sharply, while investors hoped that the company's performance will improve which can be seen from the rising share price that has currently risen over its base price at Bt14.80 per share.

"However, there are a lot of uncertainties during the third quarter this year. Apart from expenses that MAJOR has to incur after resuming operations, the company's revenue would not recover quickly because many movie releases were postponed, causing a decline in the number of customers," he said.

He expected MAJOR's business direction to become more clear in September this year after big movie releases, such as Mulan, adding that the company's share price rose amid uncertainties in the past two weeks.

Meanwhile, Phatipak Navawatana, an analyst at Krungsri Securities, expected MAJOR to recover in the second half of this year, adding that the company's second-quarter performance was the lowest point as many cinemas were closed, while many movie releases were postponed.

"However, the company would face a loss in the third quarter before taking a profit in the fourth quarter. Its performance will recover after big movies are released," he said.

"Even though the company's bad results have bottomed out, it still lacks positive sentiment to boost share price as the current movies may not attract customers, resulting in a decline in revenue and profit."