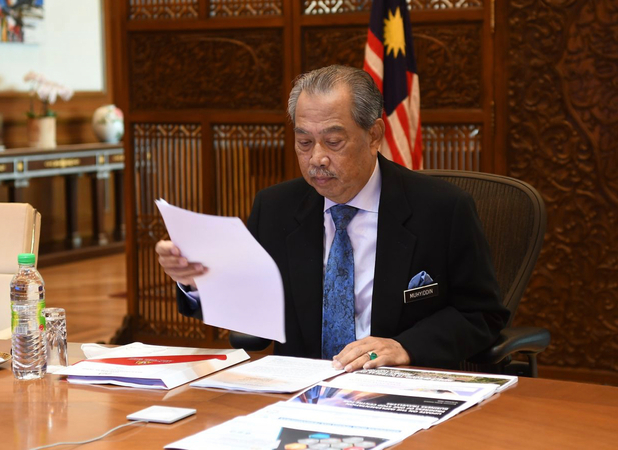 PETALING JAYA: A state of emergency is expected to be announced in a move to step up the fight against the Covid-19 pandemic that has spiked sharply over the past one week, as well as to put a stop to political squabbles.

It is understood that Prime Minister Tan Sri Muyhiddin Yassin had an audience with the Yang di-Pertuan Agong at Istana Abdulaziz in Kuantan, Pahang on Friday (Oct 23) afternoon.

This audience is said to communicate the Cabinet decision to propose the declaration of an emergency following its special meeting that ended at around 1pm Friday.

Muhyiddin is expected to present the proposal to the King for consideration at 5pm.

Highly-placed sources said Al-Sultan Abdullah Ri'ayatuddin Al-Mustafa Billah Shah would have the final say as to when the state of emergency will take effect.

"His Majesty is expected to meet his brother Rulers soon to get their views too but suffice to say, they will support any decision made by the King," a source said.

A check with certain Rulers confirmed that they had been informed of a special meeting of the Rulers, not to be confused with the Conference of Rulers.

Officials at Putrajaya emphasised that only political activities would be affected by the Emergency.

"It will be business as usual. Economic activities will carry on and there will be no curfews.

"In a nutshell, life goes on as we know it. This is for the good of the country in fighting Covid-19," the source said.

Meanwhile, lawyer Datuk Seri Jahaberdeen Mohamed Yunoos said that if an emergency is going to be declared, it ought to be “an economic, political and health emergency” not a national security type with curfews and so on.

“Furthermore, the King must take cognisance of the political instability and that ought to be addressed if this government proposes the emergency, lest it becomes and is used as a political tool. This would not help.

“We need to focus on restoring health, economy and political stability and I believe the rakyat looks up to the Yang di-Pertuan Agong to save Malaysia within His Majesty’s constitutional powers, ” said Jahaberdeen, founder of the Rapera Movement, which encourages thinking and compassionate citizens.

One official said that without such a legal move, the Election Commission would need to conduct the Batu Sapi by-election.

"We can't risk having a by-election now. It will be irresponsible to put the lives of EC officials and voters at risk now with the pandemic raging in Sabah."

The Batu Sapi parliamentary seat was declared vacant following the death of its MP Datuk Liew Vui Keong of Parti Warisan Sabah due to a lung infection on Oct 2.

The Election Commission announced Nov 23 as nomination day, Dec 1 for early polls and Dec 5 for the by-election.

Other than PBS, Barisan Nasional, SAPP, Parti Cinta Sabah, Sabah STAR, and Sabah Pakatan comprising PKR, DAP and Amanah, have said that they would not be contesting in the polls.