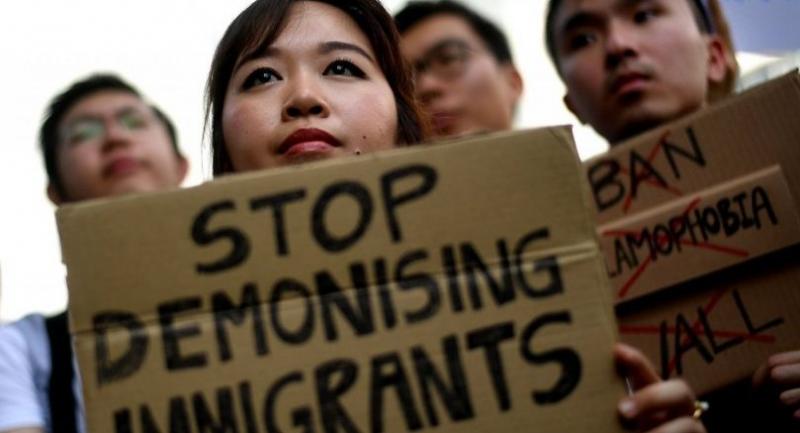 Malaysian activists hold placards during a protest against US President Donald Trump's immigration order, outside the US Embassy in Kuala Lumpur on February 3, 2017. / AFP PHOTO

Thanks to the belligerent statements and policies of Donald Trump, the Islamic State terrorist group will grow from strength to strength in coming weeks and months. The IS no longer needs to conduct overt recruiting campaigns of its own. The global publicity about Trump’s ban on people from seven designated Muslim-majority countries entering the United States will serve that purpose for the jihadists. The president has delivered an unexpectedly grand “bonus” triumph in the war they’re waging against the West.

Trump’s immigration restrictions – with more countries expected to be added to the no-entry list imminently – will have far-reaching repercussions not only for the IS but extremists of all stripes around the world. Such reckless reactionary polices herald an era of unprecedented, globe-sweeping intolerance. The anti-Trump movement will foster more anti-American sentiment, on a level far more severe than anything caused by “Ugly American” arrogance in the past.

Efforts to “make America safe again” are understandable, wherever one lives on this planet, but the new US administration’s grossly insensitive approach will instead “make America ugly again”, with all the consequences that might entail. America is already “safe”, at any rate. Ample studies show that it’s safer now than it has been in many years, most of the credit for which goes to the Department of Homeland Security initiated under President George W Bush. Surely some credit is also due to Barack Obama’s measured reliance on diplomacy rather than bombast.

Trump, continuing the rhetoric that helped get him elected, has nevertheless been successful in creating a sense of insecurity among Americans, especially those of the working class. The fear he has generated enabled him this week to impose a discriminatory policy against Muslims entering the US and extending to those who already have the legal right to live there and travel in and out of the country.

Now the new Ugly America is casting his gaze further afield, beginning with Mexico and Australia. He is wilfully disrupting American diplomatic traditions and replacing them with his own notions about striking deals. Trump appears able for now to get away with anything – this is still what’s considered a “honeymoon” period in his tenure, after all. It will be interesting to see how his policies play out in coming days as customary checks and balances on power are repeatedly tested. We might yet see his brash boasts peter out amid harsh global realities.

With the world’s most powerful country being run by a demagogue who refuses to recognise any limits to his authority, Asia must prepare. Based on his stated aims and views, Trump is likely to try and divide Asia in order to conquer it. The task of fully restoring American political and economic influence in Asia is made easier by the animosity among East Asian nations. China is the primary target of Trump’s vitriol, but he has also belittled Japan and South Korea – saying their contributions to US interests in this region are inadequate. It seems needless to say that this assertion is wholly untrue. Trump has also just lashed out at Australia over the arrangement Obama’s White House struck with Canberra for the handling of refugees.

The Trump laser beam has yet to aim at Southeast Asia, but it would be foolish to think we’ll be spared his bullying. The Association of Southeast Asian Nations should be prepared. Shifting US foreign policy will have to be addressed when its foreign ministers meet in Boracay, the Philippines, on February 24. Given the fluctuating messages emerging from Washington – and given host Rodrigo Duterte’s enthusiasm for Trump – it might be difficult to settle on a unified response, but one will be needed.