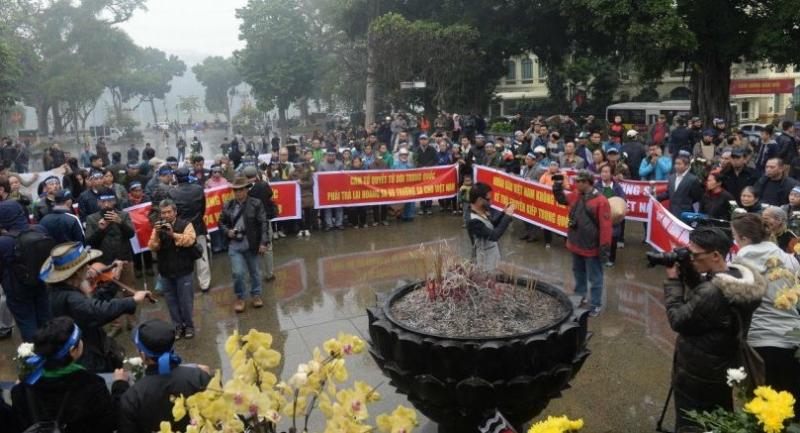 Anti-China activists stage a rally marking the 42nd anniversary of the 1974 naval battle between China and troops from South Vietnam over the Paracel Islands, in front of the statue of Vietnamese King Ly Cong Uan in Hanoi on January 19. //AFP

Unless efforts are made to resolve territorial disputes, code will be meaningless

It’s nothing but wishful thinking for the Philippines, the current Asean chair, to declare that it aims to conclude the Code of Conduct (CoC) for the South China Sea by the end of this year.

A joint working group of officials from China and Asean have set a series of meetings in order to speed up work towards creating an international legal instrument that would control the behaviour of the signatories in the contentious sea.

Although they set themselves this ambitious goal, their actions reveal a different mindset.

China and many countries in Southeast Asia have had territorial conflicts over the sea for several decades. China, however, asserted itself and occupied the Paracel and Spratly archipelagos in the 1970s and 1980s respectively.

In addition to China, its rival Taiwan as well as Asean countries Brunei, Malaysia, the Philippines and Vietnam are also claimants. The regional group began to use diplomatic tools to talk to China with the aim of creating a climate of good practices in the South China Sea.

After years of negotiations since the late 20th century, Asean and China signed the Declaration on the Conduct of Parties in the South China Sea (DOC) in 2002. Articles in the DOC clearly cited that the contracting parties should exercise restraint in the conduct of activities that could complicate or escalate the disputes.

Article five of the DOC says countries should refrain from the action of inhabiting presently uninhabited islands, reefs, shoals, cays, and other features and to handle their differences in a constructive manner.

The non-binding DOC failed to prevent any of these activities. While China was moving southward to the South China Sea, countries in Southeast Asia began to secure their respective positions in the islands and archipelagos in the contentious sea.

There have been numerous skirmishes between Chinese warships and Vietnamese fishing trawlers and exploration ships since 1988 when China moved to occupy some islands and shoals in the Spratlys.

Military activities were not abnormal in the South China Sea since the beginning. The Philippines Navy began expansion of its occupation in several islands as well as building of facilities such as an airstrip since 1982 and claimed more archipelagos in 1999.

Tension in modern times arose when Asean and China commemorated the 10th anniversary of the DOC in 2012. In April 2012, the Philippines Navy seized eight Chinese fishing boats accusing them of illegally operating off Scarborough Island, which was occupied by the Philippines.

In the meantime, China began large-scale island building and reclamation in the Spratlys in 2013. China occupies seven locations in the Spratlys and has created more than 3,200 acres of land there. Beijing controls the Cuarteron, Fiery Cross, Graven, Hughes, Johnson South, Mischief and Subi reefs. At least three airfield and other military facilities were built on these features.

In December last year, Vietnam made significant progress in its land reclamation activities and upgraded its air force infrastructure in the Spratlys. In fact, Vietnam had constructed an airfield in the Spratlys way back in 1977. The recent development was in response to China’s move. Currently Vietnam controls 28 islets and rocks in the Spratlys. The main features with military occupation include Amobyna Cay, Collins Reef, Ladd Reef, Namyit Island, Sand Cay, Sin Cowe Island, Southwest Cay and Spratly Isand.

While maintaining good terms with all claimants, notably China, Malaysia was the first to claim some of the Spratly Islands way back in 1979 in its Exclusive Economic Zone. Malaysia now controls the Ardasier Reef, Dallas Reef, Erica Reef, Investigator Shoal, Louisa Reef, Mariveles Reef and Swallow Reef.

As such activities in the contentious sea raised tensions in the region, Asean looked forward to other legal instruments to maintain peace and stability once it realised that its DOC is a toothless paper. The group called upon all concerned parties to frame a so-called CoC, to supplement – if not replace – the DOC.

Initially, Beijing was reluctant to come along as it argued that the DOC had not yet been fully implemented. The Asean side insisted it wanted to have something more binding. Finally, negotiations for the CoC began four years ago when Thailand was the Asean-China coordinator. A joint working group was set up to seek common ground for the code.

The efforts to have a CoC were conducted amid differences, if not disputes, among Asean members due to their respective interests with China.

There were some changes along the way over the past year. The Philippines secured a favourable verdict from the Permanent Court of Arbitration against China but since then there has been a policy flip-flop under President Rodrigo Duterte. The current Asean-China coordinator is Singapore, a non-claimant state. The aggressive rhetoric coming out of Washington and the reactions from Beijing have once again raised tensions in the South China Sea. These factors always cast a shadow over the efforts to create a CoC.

However some technical terms such as “early harvest” and “fast track” have been contrived over the past few years whenever the two sides or their working groups have met to make sure they had something to capture media headlines, implying some progress had been made.

Observers believe that both sides would take longer to finalise the CoC, and it was not likely unless both sides were sure the commitment would not affect their respective occupation and activities on the ground.

Furthermore, both Asean and China would not make the CoC a dispute settlement mechanism. Beijing has made it clear that it would resolve the conflict only on a bilateral basis. While some Asean members prefer to speak in one voice, many of them – notably the claimants – remain unsure if any multilateral mechanism could help.

But the point is the CoC will likely suffer the same fate as the DOC unless the issue of territorial conflict is seriously addressed. Otherwise, it will be another well-intentioned but useless piece of paper.