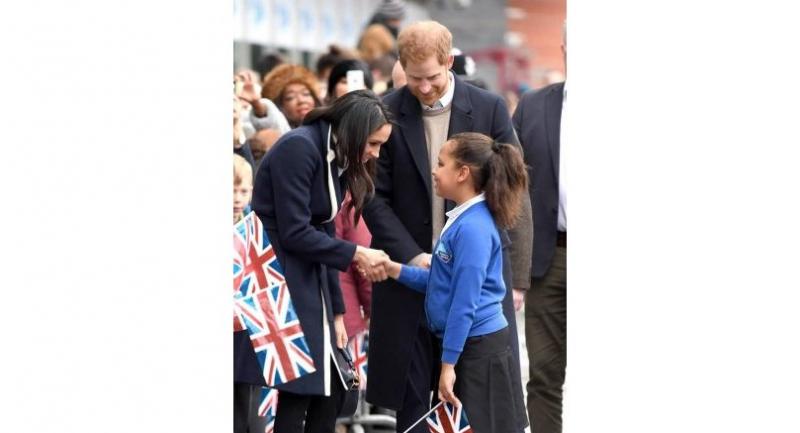 Meghan Markle and Prince Harry meet children during a visit to Birmingham on March 8. AFP

With Meghan Markle’s induction into Britain’s royal family set to be sealed with a kiss today, Caribbean grocer Esme Thaw explained what it meant to her and her customers: “It makes us feel as we belong.”

Markle will become the royal family’s first mixed-race member in modern times when she marries Prince Harry today. At Brixton market in London, hopes are high that the wedding will mark another step towards a less race-oriented society.

“It’s nice that this person is coming within the royal family, it makes us feel as we belong. We can embrace each other, as human beings,” Esme said from behind her shop counter.

“We don’t have to feel black and white, we need to stop that, just look at a person as a human being.”

Brixton has historically been the centre of Britain’s Afro-Caribbean community, beginning with the post-war “Windrush generation”, named after the ship that brought the first group of a wave of migrants to London, in 1948.

In one of the couple’s first public appearances in January, they were greeted in Brixton with shouts of “We love you!” as they visited a youth radio station, which mainly plays hip-hop, grime and house music.

The Windrush generation hit the headlines in recent weeks when it emerged that some people who arrived from the Caribbean as children had been threatened with deportation as they were unable to prove their status.

Shopper Mary Wilson, 51, who is retired, said the affair had “shaken my faith” in Britain. She hoped the wedding could help heal some of the damage.

“I know someone who has been personally affected. He came to school here when he was about 10 but they couldn’t find any records of him.

“He’s got children, his partner committed suicide, so he had to deal with a lot. To find out the government wouldn’t give him any additional support was disgusting,” she said.

“Hopefully, the wedding will bring about a more positive atmosphere, so people will think, maybe with Meghan marrying into the royal family, it might be a doorway being opened for black Caribbean people.”

“It says that nowadays, regardless of your skin colour... there are certain boundaries out there, but if you put your head down and work hard then you can achieve what you want,” she said.

Merlene Anderson, who was setting up her Jamaican barbecue stall in nearby Windrush Square, said the wedding was a symbolic moment.

Historically, “all the European people involved themselves in other people’s lives.

“So now it’s time to sit back and watch one of our blood relatives involved in the white man’s life in what they treasure most, which is wealth and royalty,” she said.

Anderson said she would bring a television to work on Saturday to watch the nuptials.

“But it’s not about white and black, it’s about them, and I wish them happiness,” she added.

Shopkeeper Esme will rely on her customers to update her on today’s events. She praised Harry for helping break down barriers – paying tribute to his late mother, Princess Diana.

“No matter what race of people, he embraces them just like his mother did,” she said.

Wilson will be watching the wedding at home “with a nice glass of Chardonnay”. She too had fond memories of the late Princess of Wales.

“I’ve never really been a great lover of the royal family, but when Princess Diana came on board, I got involved,” she said.

“She made a lot of difference. When she died it broke my heart. You can see her spirit lives on.”