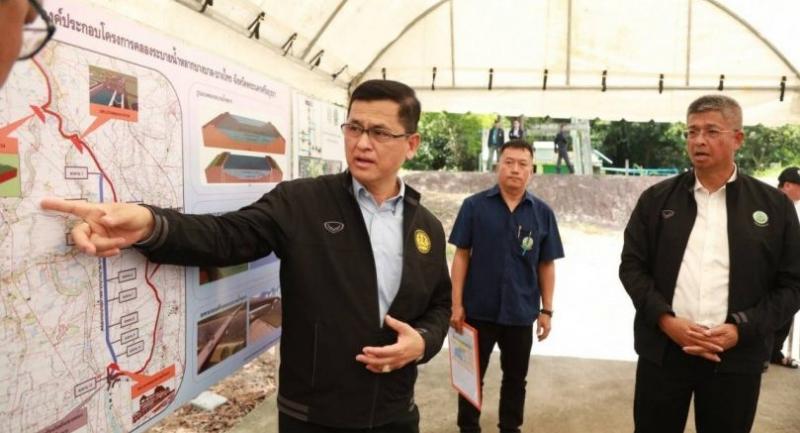 THE FLOOD-TO-FIELD DIVERSION SCHEME ATTEMPTS TO SOLVE THE CHRONIC ANNUAL PROBLEM, BUT MANY CHALLENGES LIE AHEAD

MANAS Kongsarai, a long-time farmer, will have only two and a half months to grow and harvest his one-month paddy on a 50-rai (8-hectare) plot as a result of the new rice-growing schedule introduced in the Central plains by the government since last year.

After September 15, the land would cease to be a farm and be temporarily converted into a floodwater retention area to help the state manage the annual monsoon inundation without relying too much on large-scale infrastructure like in the past.

It’s a so-called flood-to-field diversion scheme that has been debated for a decade before the military government made the bold decision to go ahead with its implementation to tackle the chronic flooding problem faced by the country.

“It’s sort of like having tools to help manage floods in our areas, and it’s like we are going back to our past way of life that we had left behind, familiarising ourselves with it once again,” said Manas, who is in his 80s. He said he would turn to fishing after his field becomes a flood diversion zone. Located in the tropical zone, Thailand faces torrential rains every year brought by storms, alternating with a dry season that brings water scarcity in some years.

The Royal Irrigation Department has long been responsible for managing water during the rainy and dry seasons, to ensure adequate water for regular use while being tasked with ensuring excessive rains during the monsoons don’t flood land and properties.

Under the green revolution plan of the 1960s, farmers were introduced to large-scale growing of cash crops and massive irrigation infrastructure was developed and put in place.

While major dams were constructed in mountainous areas in the North, irrigation infrastructure was extensively laid across the fields of the Central plains, covering almost 30 million rai so far, making the country the world’s ninth in terms of the size of irrigated area.

Despite the extensive irrigation infrastructure, Thailand often experiences flooding, causing severe damage to the state. The losses caused by one of the worst floods in recent years, in 2011, were estimated at around Bt1.36 trillion by the World Bank.

Innovative ideas such as digging tunnels and new mega-dams have been considered over the past decade or so, but they have encountered strong opposition due to worries over their environmental impacts, making the projects almost impossible to develop and put in place.

The military government, as it entered the office, discarded all the plans and strategies developed by the previous government after the 2011 floods. It set up a new Water Management Policy Committee chaired by Deputy PM Chatchai Sarikulya, to develop a new water management strategy under which vast fields were to be used help regulate flood waters as part of the third strategy.

Last year, the government first introduced the idea into the fields. Besides Bang Rakam Field in Phitsanulok province in the lower North, the government decided to survey and try using at least 12 fields in the Central plains to help regulate excessive water flowing from the North.

The fields, around 1.15 million rai, including Manas’s, were requested to stop growing the second crop of rice to accommodate the floodwaters, starting around mid-September, when the floods from the North usually arrive on the Central plains.

The water would be stored there and diverted from one field to another, or within zones designed in the fields, to help check their massive flows.

Around December, they would then be discharged from the fields, leaving a certain amount of land for farmers to grow their delayed rice crop.

The scheme was tried last year, the first time the fields in the Central plains were used systematically to regulate floods.

“If you ask whether it marks a progress in flood control and regulation, the answer is yes as we are not solely reliant on heavy infrastructure anymore. We are applying social and geographical management to help us regulate the water,” said Dr Somkiat Prachamwong, secretary-general of the newly established National Water Resources Office.

Although the flood-to-field diversion scheme would help circumvent conflict over environmental impacts and the strong opposition to big irrigation projects, there are also challenges in dealing with communities who have disconnected from the lower plains way of life, and are engaged deeply with large scale and intensive farming.

The office has had to communicate extensively with local leaders and communities in an attempt to adjust their attitudes and their rice-growing schedules.

The most worrying point in the scheme relates to compensation for the farmers for loss of income during the flooding period.

The compensation amount has been long debated, but it has yet to be finalised. So far, the government has not been required to compensate them during the flooding period, unless they suffer damage to property.

Somkiat said there should be a compensation mechanism, but did not elaborate.

He visited Ayutthaya province to inspect the progress and weaknesses of the scheme. Some irrigation infrastructure would still be needed, such as sluice gates and irrigation canals, to help regulate floodwaters flowing in and out of the fields, Somkiat said.

The officials responsible for the designated zones were instructed to prepare and repair damaged infrastructure to be ready for the coming floods.

Farmers and community leaders were invited to the meetings to hear the government’s instructions with regard to the scheme’s management.

Manas said since the scheme was introduced last year, his plot of land for growing rice in Thung Pa Mok, another designated area, had flooded less than in the past as it had been managed.

What worried him more were not the floods but the rising conflict and arguments between his community in Tambon Kudi and Tha Din Dang, located opposite the dyke protecting his field.

Tha Ding Dang is stranded in floodwaters longer than its neighbours, as it had nothing to help regulate floods. The dykes and sluice gates protecting and controlling floods in Manas’s fields only exacerbated their situation as they blocked the floodwater to divert it out of their community. He said the plan to increase the height of some sluice gates to better control floods inside the Pa Mok Field would only inflame the situation.

He said this was a loophole in the scheme, as it did not have any tools or mechanisms to manage such side effects.

However, he said, the scheme was on the right track as it had taken socio-cultural aspects into account.

More importantly, it replicates nature as water usually flows through the Central plains and brings nutrients before flowing into the sea.

By adjusting a modern farming style and going back to what used to be, the scheme utilises what nature used to design for the country, he said.

To ensure that the scheme would be fruitful, he said concerned parties needed to review their ideas periodically to recheck the purpose of the scheme.

Water, he said, must flow, and the scheme needed to be implemented while taking this reality into account. Having the right thinking and purpose from the beginning would lead to proper implementation, he added.

“The fields would help retain water, but you need to make sure that is just temporary. Otherwise, what you would do later is build blockages here and there, and that would become more and more difficult to manage, hydrologically and socially,” said Surajit.