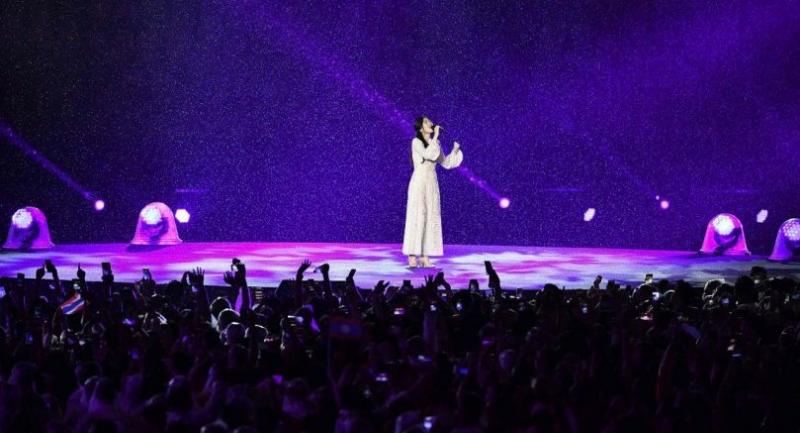 Indonesian singer Isyana Sarasvati performs during the closing ceremony of the 2018 Asian Games at the Gelora Bung Karno main stadium in Jakarta on September 2, 2018. (Photo by GOH Chai Hin / AFP)

The social media statuses of many Indonesians say it all. Some posted the hashtag “Proud to be Indonesian”. Others changed their status every time an Indonesian athlete clinched a gold medal. That means 31 updates in the last two weeks.

Coming fourth in the just-concluded 2018 Asian Games defied even the most ambitious predictions before the region’s biggest sporting gala began.

Indonesia had aimed for 16 golds to put it in the top 10 in the medal tally. When the Games closed on Sunday, the host country came away with 31 golds, 24 silvers and 43 bronzes, ranking behind Asia’s three sporting giants — China, Japan and South Korea.

The drum started beating after the spectacular opening ceremony at Jakarta’s Gelora Bung Karno Stadium on Aug. 18. Rather than relying on laser beams and fireworks, it turned to the creativity of young talents to put on a great show of songs and dances, with more than 5,000 performers, to wow the crowd and those watching on TV at home.

Many people could not believe that Indonesia could pull off something like this. They obviously underestimated their own artists.

Another reason to be proud is that the Games, held in Jakarta and the South Sumatra city of Palembang, went almost without a hitch, in terms of security and comfort for athletes and spectators. Jakarta even took care of its notorious traffic and pollution.

That tickets to most events were sold out further attested to the success.

The Rp 6.6 trillion (US$447 million) price tag to host the Games was money well spent, considering the impact it has had on the nation’s psyche. It boosted the nation’s confidence like never seen before.

But it’s also a reflection of the low self-esteem of a nation that has not seen any major international achievements to speak of in recent years, certainly not in sports.

Indonesia, the fourth-largest country in the world, with 265 million people, is not known for its sporting prowess, not internationally, not Asia-wide, not even in Southeast Asia.

In the 2016 Olympics in Rio de Janeiro, Indonesia ranked 46th with one gold. It came 17th in the 2014 Asian Games in Incheon, South Korea, with four golds. In the last two Southeast Asian (SEA) Games in 2015 and 2017, it consistently came fifth out of 11 participating countries, behind Thailand, Malaysia, Singapore and Vietnam.

In the last two decades, Indonesia has enjoyed such accolades as the third-largest democracy, a democracy in the nation with the largest Muslim population in the world and an emerging market economy. It ranks as the 16th largest world economy, and at its current trajectory, it will be in the top 10 by 2025 and top five by 2040.

A rising Asian power in terms of its political and economic clout, Indonesia is not yet a sporting giant.

Two major international events later this year will be occasions once again to show that Indonesia can serve as a good host. They are the World Bank-International Monetary Fund Annual Meeting and the World Ocean Conference, both in October in Bali. On much smaller scales compared to the Asian Games, holding these two gatherings should be a walk in the park.

But it is in its sports that Indonesia should not rest on its laurels. We need to take a closer and more honest look at how we pulled it off.

Indonesia maxed out its privilege as hosting nation by including sports in which it felt it had a chance of winning golds. Pencak silat bagged 14 golds, sports climbing three, paragliding and mountain biking downhill two each and jetski one.

This is not to take the glory away from medals gathered in other sports, such as badminton (two) and one each in tennis, weightlifting, rowing, sepak takraw, taekwondo, karate and wushu.

It is, however, a warning that Indonesia is still lacking in the main Olympic sports like track and field and water sports. In soccer, perhaps the most popular sport, it was eliminated in the second round.

For what it’s worth, the Asian Games have galvanized the nation’s love of sports and craving for the glory of seeing the red-and-white flag raised to the tune of “Indonesia Raya”.

Now it is up to the various sport federations to capitalize on this national mood.

They have their work cut out to prove that this was not a fluke, or that it has come by virtue of our hosting it. Time is short. Next year, we have the SEA Games in Manila, and then the Tokyo Olympics in 2020 and the next Asian Games in Huangzhou, China, in 2022.

Winning 31 gold medals in the Asian Games may have been a good shot in the arm to enhance national confidence. Let’s hope this is not simply an anabolic steroid injection that will soon wear off.