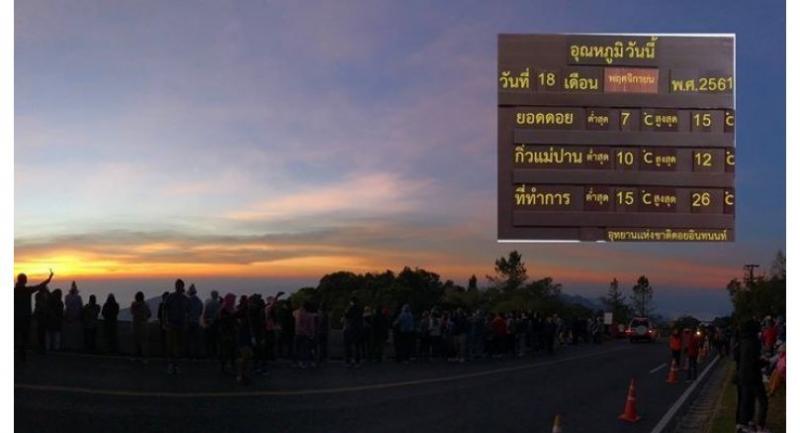 As the high season has arrived, it’s not only Kaeng Krachan, the country’s largest national park entangled with latest objections to its road improvement, that is facing pressure of increased tourist visits.

Despite their primary objective to preserve the natural resources of the country, the national parks under supervision of the National Parks, Wildlife and Plant Conservation Department have in recent years been dealing with the challenge presented by the increased number of tourists, which peaked at around 18.7 million last year. (Read SPECIAL REPORT: Kaeng Krachan's main priority: tourism or wildlife protection?)

In order to mitigate impacts from increased tourist visits, the department is experimenting with a new approach to tourism management and regulations based on “carrying capacity”.

If the project now being implemented at Mu Koh Similan National Park is successful, it is expected that the new management model would be introduced to other national parks nationwide, of which 40 out of 131 are said to be under pressure from increasing visitors.

“If we can do it here, we can do it elsewhere,” said Asst Professor Dachanee Emphandhu of the Forestry Faculty’s Department of Conservation at Kasetsart University, who is a key figure in the pilot project at Similan, one of the top three most popular marine parks which has so far seen nearly one million tourist visits in the first half of this year.

Tourism has long been seen as a key economic magnet for the country. According to the Tourism Department, the sector contributed Bt2.9 trillion last year, and another Bt3.3 trillion or so was expected this year, from an estimated 30-plus million tourists.

The now-defunct National Reform Council had placed importance on the sector, addressing it as the first reform agenda before it was wound up a few years ago. The body’s sub-economic committee, which submitted its study on tourism agenda to the Cabinet to endorse in mid-2015, said tourism was one of the country’s key economic drivers with average annual growth of 12 per cent from 2009-2014 when the data was available.

In 2013, Thailand ranked 10th in the world for the number of foreign visitors, with the second-highest inflows in Asia Pacific at 26.5 million. It generated income for the country at about Bt1.17 trillion, or 10 per cent of the nation’s GDP. Combined with Thai visitors, the GDP contribution reached 14 per cent, according to the committee.

During the same period, the country saw the number of visitors at iconic national parks soaring, from 11 million in 2013 to 18.7 million last year, with foreign tourists accounting for almost one-third, around six million visits.

Despite its popularity, the country’s tourism competitiveness has remained relatively low.

As noted by the committee, it was ranked 35th out of 141 countries by the World Economic Forum in 2015, and slightly shifted to 34th last year.

Environmental sustainability remains a crucial factor dragging down its rank, falling from 116th in 2015 to 122nd last year, with intensive environmental damage and threats to plant and wildlife species underlined as the prime drags on the country’s rank. Yet Thailand’s natural resources potential was ranked high at 16th in 2015.

“The low rank in the category of environmental sustainability in regard to tourism reflected our environmental degradation problem following tourism, and this needed to be fixed urgently,” the committee noted in its study.

The ineffectiveness of tourism management at tourism attractions, particularly in protected areas, was highlighted, along with a further five problems including tourist safety and a lack of logistics and facilities.

The committee noted that the ineffective management of tourism attractions was largely due to the lack of planning and regulation, and the failure to rehabilitate those places.

And no less important was the failure to calculate the “carrying capacity” and regulations to implement curbs on tourism activities in protected areas. The result, the committee noted, was that the environment and natural resources were adversely degraded in multiple locations.

For example, Doi Inthanon National Park in Chiang Mai province saw crowds of up to 80,000 for the 2015 New Year, far exceeding its 2,500 capacity and overnight space for 800.

Quoting the Tourism Department, the committee further noted that up to 138 tourism attractions had since the late 2000s been identified as heavily degraded and in need of urgent rehabilitation, 50 of which were natural attractions.

The five most popular national parks, including Doi Inthanon and Khao Yai, were reported to have received up to 30 per cent of the overall visitors, according to the committee as it cited DNP statistics.

The number of visitors in marine parks, it further said, could in reality far exceed the number being reported to the department. Similan in 2013 was reported to have received only around 99,000 visitors, or around 550 per day during the six-month high season, a low figure that the committee found unconvincing.

The committee specifically proposed that tourism be reformed in protected areas. Among its proposals were to apply the “carrying capacity” approach to regulate and control both the number and activities of visitors. The proposals, unfortunately, were not specifically addressed in the reform agendas under the new reform law. Newly emerging natural attractions like this, Phu Chi Fah in Chiang Rai, are being promoted to help distribute crowded visitors.

“Carrying capacity” has long been a buzzword among conservationists, but got little serious attention until the department came to realise the growing impacts from tourism in its marine parks around the early 2000s, according to Dachanee, who helped to initiate the national park’s study on the concept.

A mid-2000s study of some key national parks, including Similan, showed the department that tourism activities far exceeded the carrying capacity of the places due to the high number of visitors.

The department then decided to come up with a development plan to introduce carrying capacity to its national parks in an attempt to curb tourism impacts.

Its Innovation Institute defined the carrying capacity of national parks as the maximum amount of tourism activities that a national park could sustain without causing unacceptable impacts. That is, the maximum number of visitors it should allow into a compound.

Critical factors involved in determining capacities include ecosystems, the environmental quality, physical facilities, as well as psychology. The lowest figure, which tends to be the ecological carrying capacity, would be picked as the park’s official number.

Based on the study, the department came up with the CC figures for at least seven parks, including Similan, which stood at 1,600 people per day. However, these figures have not led to any further regulation and controls desired by the department, due to various factors including the lack of policy and serious enforcement, Dachanee says.

Then a new team of executives, including the department’s Innovation Institute’s former director Songtham Suksawang entered the department’s National Parks Office in 2016, along with the new director-general Thanya Netithammakul.

Under their direction, Dachanee says, the department has managed to hold up its position against pressures and is ready to take action. Carrying capacities had been discussed in the past few years before being selected for a pilot project early this year. In addition to the carrying capacity being emphasised in a new directive, Dachanee says the concept of “tourism management in national parks under CC” could potentially lead to the necessary measures to help shape and regulate appropriate tourism.

At Similan, for example, CC has been reintroduced, and the department has gone on to issue an order to enforce it while also developing and introducing management practices such as advanced e-ticketing, GPS boat regulations, visitor quotas and deductions, along with other policies to help regulate tourism.

If it works and a new system is set, the result could be a new tourism management model for national parks in the next three years, she said.

“I have started to see some hope and the chance for a turn to more sustainable tourism in our national parks. Our parks have the primary goal of preserving natural resources and the (recreational) uses of it come second. That’s the principle in our parks management, and as such tourism in national parks and any developments in regard to it, should not in any way cause impacts to the fragile ecosystems,” said Dachanee.

Petch Manopawitr, a former deputy director and Thailand programme coordinator of the International Union for Conservation of Nature (IUCN) Southeast Asia, said it’s the right trend that people visit national parks so that they can learn and develop their appreciation for nature. In some foreign countries, a decline of visitors in national parks becomes an issue, he cited.

As people love to visit national parks in the country, such the trend should be sustained. It just needs to be managed so that it would not cause impacts to the places, Petch said.

Petch agrees with Dachanee that national parks in the country are lacking in proper tourism management. That’s partly due to the lack of policy and enforcement despite the full authority given under the law, he said. In addition, necessary information to help educate the crowd hardly reaches visitors as supposed to help change their behaviors.

As some good examples of tourism management in the right direction now taking place, including at Similan, Petch said it’s the time to systematise the approach. He points to the previous example of the Smart Patrol conservation system that is widely used in parks.

Petch said tourism in national parks also has a high potential to be a tool to help support conservation work if people have learned more about nature and can have a supporting role in conservation in the areas, such as volunteering.

This just needs space to be opened to them, he said, citing an example from the world’s famed Yellowstone National Park in the United States, where park friends groups are encouraged.

In addition, it can also be participatory, like that happens already in some areas such as Kui Buri next to Kaeng Krachan.

“Tourism is not a problem, but management is. Mass tourism can be smart in our national parks if we properly manage it, and sustainable tourism can be nurtured and grown here in the long run. It just needs a little more of work to build a system to support the work, and it’s the time,” said Petch.