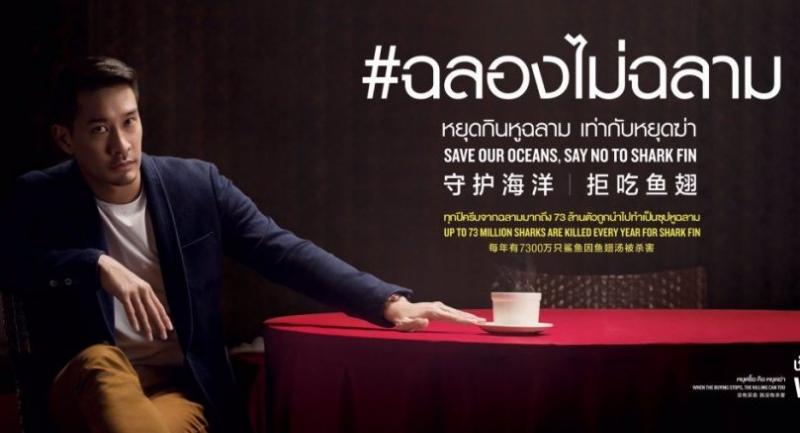 The newly-wed couple is about to cut their wedding cake and share it with their guests, when it suddenly transforms into a live shark. The couple then slices off its fins, which spill into the guests’ soup bowls.

Popular actor Nawat “Pong” Kulrattanarak, sitting at a corner table, speaks up: “Let’s not make auspicious events unfortunate by serving shark fin”. This strong message was delivered with the aim of trying to change the behaviour of the target audience – the wedding industry.

This recent campaign was launched in response to a finding by WildAid, a lead campaigner against wildlife consumption in Thailand, that shark fin soup is most often served in wedding receptions.

This is one of the campaigns following the trend of social behaviour change communication (SBCC) in an effort to reduce the demand for vulnerable species. Thais can expect to see more and more SBCC in the near future. The launch of www.changewildlifeconsumers.org at the conference as a new SBCC resource.

Gayle Burgess, behavioural change coordinator for TRAFFIC, noted that the traditional approach to stopping wildlife trafficking and trade has been by suppressing supply through enforcement measures.

In TRAFFIC’s recent International Social Behaviour Change Conference in Bangkok, Burgess and other anti-wildlife trafficking and trade experts pointed out that though the traditional approach has made a difference, it needs to be matched by measures to cut down demand.

Demand, after all, fuels the trade.

Burgess said various studies, including TRAFFIC’s latest research analysis, have identified that most of the “demand-reduction initiatives” between 2005 and 2015, were awareness campaigns aimed at the public that communicated conservation values or the threats faced by wildlife.

While these types of communication remain important, the analysis highlighted a need for campaigns that also target the motivations and values that drive buyers. By drawing on discoveries in behavioural science, SBCC campaigns can aim to rapidly change consumer choices and ensure a lasting impact.

“SBCC is a well-established and proven approach internationally, especially in fields such as public health and international development,” Burgess said. “Thanks to this extensive track record, there is already a very rich body of literature, evidence, research insight and case studies available to support the conservation community, amplify success factors, and achieve rapid and lasting impact.”

Eleanora De Guzman, SBCC specialist for USAID Wildlife Asia, explained the three main characteristics of the approach at the conference. The approach is grounded in well-rounded research on the target audience, strategic planning, and monitoring, said De Guzman, whose group is planning to launch a SBCC campaign challenging traditional beliefs that view tiger parts as spiritual items.

The second SBCC elelment involves uses of socio-ecological modelling to help define factors to help drive change, and the third characteristics the SBCC possesses is application of three prime strategies: communication on behaviour change, social mobilisation (including social sanction and pressure) and advocacy, along with related legal and policy changes.

The target’s motivations are discovered through well-rounded research and planning, along with an assessment of socio-ecological factors such as friends and family members, as well as their own beliefs. Once the motivations are understood, a mix of strategies is created with the aim of influencing and changing those motivations De Guzman explained.

“Awareness-raising campaigns used in the past to oppose wildlife trafficking were good, but they were not enough,” said De Guzman.  “Although the proportion of wildlife consumers appears small, they are significant as they are influential and affluent, according to our findings. It’s something that I call a ‘niche market’, which is truly the driving force of wildlife trafficking.”

Although the new SBCC approach is widely accepted as being more influential than awareness-raising campaigns, practitioners agree that the approach needs to take the different and specific context of the society into account.

Some Asian countries that reportedly account for the majority of wildlife consumption, such as China, traditional beliefs are deep-rooted and strong. This presents a critical challenge for SBCC practitioners who wish to change people’s motivations.

De Guzman said spiritual beliefs are a very strong challenge and very difficult to deal with. In Vietnam, she said, some business people still consume rhino horns, while some Thais buy tiger parts, including amulets, due to their spiritual beliefs.

Her organisation is exploring ways to address this, separating the behaviour from the holder’s beliefs, through a campaign to be launched next year.

“We have to be cautious because it’s very tricky and ingrained. To take a cautious step, [the subject] must first be well-researched,” De Guzman said.

Despite the challenge, Burgess sees opportunities for this approach in Southeast Asia, especially Thailand. There is already a very vibrant, interested community active here that can help crafting impactful messages and come up with the best way of delivering them through innovative approaches and cross-sectoral collaboration.

The successful factors, she said, are likely to include ensuring a sufficiently targeted approach that appeals to the values and interests that already matter to key consumer groups, along with using inspiring messages delivered by influential people – often family members, colleagues, peers and friends.

Nuthatai Chotechuang, Thailand representative for WildAid, said past efforts to reduce demand for wildlife consumption here focused mainly on raising public awareness, as it was considered an important first step for reaching a public that did not know much about the subject.

In contrast, she said, SBCC is very target oriented and requires a great deal of research to address the target’s motivations to induce change.

Realising that change is critical to the success of anti-wildlife trafficking and trade here, past campaigns have adopted SBCC to a greater or lesser extent, drawing on social mobilisation strategies to put pressure on the target in order to change their behaviours, she said.

“It’s more like we communicate with the society as a whole and hope that they will then ‘require’ the target to change for us.As society becomes aware of what’s going on with wildlife, for instance, like in the case of the campaign against ivory, we then move to the next step, which is changing their negative behaviour against wildlife,” Nuthatai said.