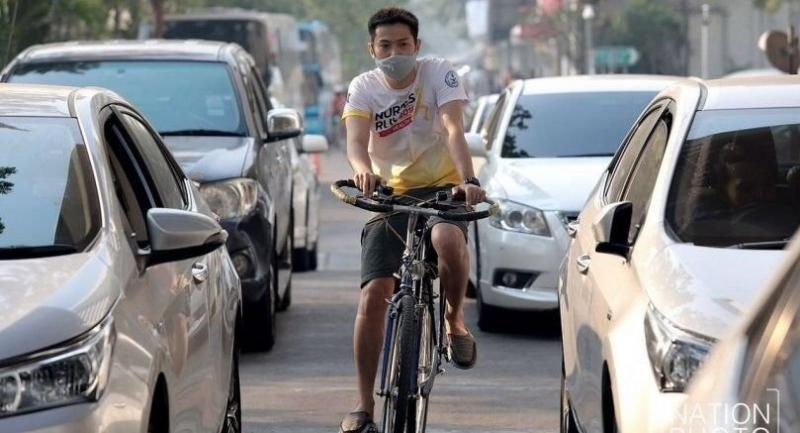 THE CAUSES OF SMOG THAT HAVE EMERGED AS A THREAT TO PUBLIC HEALTH ARE WELL KNOWN; THE REAL CHALLENGE IS TO IMPLEMENT THE SOLUTIONS

ENVIRONMENT Minister General Surasak Kanchanarat assured the public on Wednesday that the government has a plan and will take steps to tackle the hazardous smog from fine PM2.5 particulates. But a genuine solution, air pollution experts point out, will require a sustainable transportation system as well as serious actions such as strict limits on vehicles causing pollution, as part of a long-term plan.

“With or without winter winds to help blow it away, the problem will remain with us, as we have millions of vehicles causing pollution on the roads. The prime causes need to be the first things tackled,” said Sonthi Kotchawat, a former senior pollution monitoring and assessment official at the Office of the Natural Resources and Environmental Policy and Planning.

For nearly a month, residents of the nation’s capital and those living nearby have endured smog beyond official safe limits, set at 50 micrograms per cubic metre, Sonthi said.

Thai society awakened to the extent of the problem just a few years ago when the Pollution Control Department (PCD) fully rolled out devices to detect and measure the particles in areas throughout Bangkok. Given how recently the public has been alerted to the danger levels, measures to properly deal with the problem have not yet been put in place, and an ad-hoc approach has been taken even as the readings climb at this time of year, Sonthi said.

The causes have now been detected; diesel-driven vehicles have been identified as the main culprits due to their incomplete combustion.

According to the Thailand Development Research Institute’s Transportation and Logistics Policy Department, the number of vehicles in Bangkok jumped over the past 10 years, from around 2.9 million personal and small transport vehicles in 2008 to around 5.56 million vehicles by 2017.

Sonthi said the problems with diesel vehicles are their engine and petrol standards, which in Thailand mainly remain below the acceptable international Euro 5 or 6 standards. Those European Union standards allow only a very small amount of sulfur to be in the diesel-fuel mix.

Thailand set the standard at Euro 4 for engines and petrol in 2012, which allows 50 parts per million of sulfur in diesel. It was learned later that many public buses, as well as personal vehicles older than the series launched in the market in 2002, were well below that standard, Sonthi said.

While upgrading the standard in use could be an option, more important is to limit the number of polluting vehicles on the roads, he said, through a switch from dirty engines to cleaner options such as electric vehicles.

Other experts, including the director of the TDRI’s Transportation and Logistics Policy department, Sumet Ongkittikul, agreed with Sonthi that the number of vehicles on the city’s roads needed to be limited in the long run.

And that presents a big challenge in itself, Sumet said, critically because investment in cleaner engines is still expensive due to the high cost of technology. This, he said, would delay the transitional period from dirty engines to cleaner ones.

Sumet suggested that the government come up with a goal for the transition period, combining measures such as upgrading engines and petrol standards and developing public transit.

“We often learn about problems too late, and what is worse is we often come up with solutions even later. So, it’s almost impossible to immediately enforce hard measures such as a ban on road vehicles. There is a need for planning and designing our solutions, but first and foremost is fixing our mindset that it’s not a problem,” said Sumet.

Assoc Professor Chamnong Sornpipat, a committee member of the Asian Transportation Research Society, said the smog problem from PM2.5 fine particles has something to do with our clean-air policy and the sustainable transport policy – which are interconnected.

Chamnong, who is also a member of a think-tank, Klang Panya Institute, said the problem has been ongoing worldwide for years after some major cities, including London, faced a difficult time. A number of lessons are available, but most Thais are just not aware of them, he said.

Some agencies, including the PCD, he said, had attempted to address the issue, coming up with efforts to measure and set the air quality standards, but such good initiatives were sometimes discontinued after its advocates had left the office.

This, he said, reflects the bigger picture of the lack of responsive clean-air policy in place to deal with the problem. However, the problem is rather localised in nature, meaning it occurs only in some places where traffic is heavy, such as Bangkok and a few other big cities.

The best policy to help address |the problem, he said, should not be |“one-size-fits-all, but rather differentiated and applied locally”. This requires a tilt towards decentralisation, in which local authorities in responsible areas are allowed to take a leading role to tackle the problem.

To reduce polluted air, there are three prime factors to consider, said Chamnong: a reduction in pollution concentration by vehicles, reduction of the number of vehicles on the road, and reduction of traffic during peak periods of pollution.

They can be applied to different degrees to deter pollution sources, and could include new economic incentives or tax disincentives.

Ultimately, the measures should lead to a sustainable transportation system that moves people out of their personal vehicles and towards much higher-quality public mass-transit systems.

Alongside improved city planning and the expansion of green areas, a sustainable transport policy would help ensure citizens were breathing clean air, and do it more effectively than could measures focused on regulating standards of personal automobiles, he concluded.

“It’s a fact that cities will continue to grow and people will migrate from rural to urban areas, and so the problem is not limited to just Bangkok. Focusing on the primary cause is important, but we need to do more,” said Chamnon.

“We need to see the big picture and [the government] needs to be able to see the interconnections” between air quality, a shift from motorised to non-motorised systems, sustainable transport, city planning and green zoning.

Side story: Automakers under pressure to quickly raise emission standards

THE CURRENT air pollution crisis in Thailand has led many to call for quick implementation of stricter vehicle emission standards.

The strict Euro 6 standard, and its equivalents, have already been implemented in many parts of the world, including Europe, China, South Korea and Singapore. Thailand continues to set the legal limit for passenger cars in line with Euro 4, while trucks need to pass the even weaker Euro 3 standard.

But that seems to be just the start of the problem. Even with the latest emission standards for new vehicles, it is common for the vehicle’s pollution performance to worsen after several years, and by a significant margin.

Worse than that, the auto industry was recently rocked by the “Dieselgate” scandal after Volkswagen Group was caught violating emissions testing by programming the diesel engines to activate emission controls only during lab emission testing.

This caused the NOx (nitrous oxide) emissions to meet US standards during testing, but the level actually rises by up to 40 times in real-world situations.

This shows that solving the air pollution problem requires both tougher laws and strict annual testing of used vehicles.

Some are also calling for EVs (electric vehicles) to be promoted and widely used, but the process is slow. As well, if the electricity is not supplied by cleaner sources such as dams, wind or solar power, the pollution problem simply moves to where the fossil-fuel power plants are located.

In Thailand, the Euro 4 emissions level was implemented for passenger cars in 2015, some 10 years after it was adopted in Europe.

There has been talk among Thailand-based automakers in recent times to lower emissions by speeding up the adoption of higher emission standards, says Dr Panat Boonkham, vice president for customer service at Mazda Sales (Thailand) Co Ltd.

Meanwhile, Thailand is not scheduled to enter even the Euro 5 stage until 2023.

“This is very slow, meaning that we are stuck in Euro 4 for 10 years,” Panat said.

Mazda already manufactures for export Euro 6 Mazda2 models at its Rayong plant and would have no problems if higher standards were implemented.

“Actually we want to use Euro 6 for domestic models because we already produce them,” he said.

Panat said luxury carmakers like Audi, BMW, Mercedes and Volvo are also willing to offer cleaner vehicles, while some other automakers are reluctant due to the higher cost per vehicle. For oil companies, upgrading from Euro 4 to Euro 5 or Euro 6 also carries costs, he said.

Meanwhile for commercial vehicles including heavy trucks, the current standard is stuck at Euro 3, and some companies, such as Scania, have been calling for an upgrade to Euro 6.

“The vehicles are more expensive and refineries need upgrading to lower the sulfur content of diesel below 10 parts per million.

“However, with less air pollution, the cost of healthcare can be expected to drop,” Stephan Dorski, managing director at Scania Siam Co Ltd, said in a recent release.

Dorski cited a Kasetsart University study of pollution-related health costs in 2017, which found that every microgram of PM10 beyond the safe limit costs Bangkokians up to Bt18.42 billion in medical expenses.

Euro 5 and Euro 6 vehicles require diesel particulate filters to remove soot from the exhaust, eliminating black smoke from the tailpipes. It is estimated that as much as 90 per cent of particulate matter and NOx can be eliminated when stepping up from Euro 3 to Euro 6 directly.