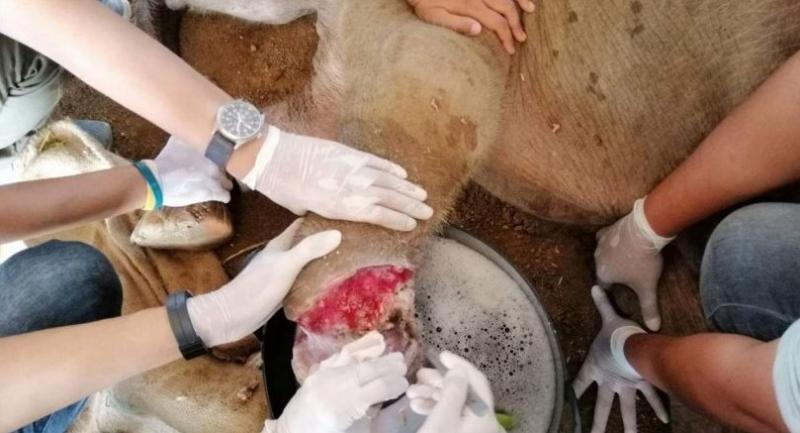 Fah Sai was only a month old when veterinarians from the National Parks Department found her trapped in a snare set on the edge of the Ang Rue Nai wildlife sanctuary in Rayong province in mid December.

She sustained a deep cut in her left leg as she tried to free herself from the snare, and though the veterinarians did their best to treat her, she survived for a little over three weeks. She was far too week to fight the severe infection that had set in.

Fah Sai is not the only baby elephant that has been caught by these snare traps in recent months. According to Pattarapol, at least five baby elephants – aged between one month and five years – have been found caught in snares, especially in the East where the human-elephant conflict is prevalent.

Only last month, forest rangers retrieved as many as 149 traps from the edge of Ang Rue Nai, rescuing animals such as bantengs and boars.

Pattarapol said that finding trapped wild animals is not new to those fighting against poachers, but in recent years, they have noticed that this activity has shifted to the outskirts or the edge of forests, presenting forest officials with a brand new challenge.

The senior veterinarian explained that inside the forest, there are “push” factors that prompt wild animals to leave their habitat – these include the scarcity of food and water, changes in climate and disturbance from poaching.

However, with human activities moving closer to forests, especially farming, they have given rise to “pull” factors that lure animals out of the forests. This phenomenon is being observed in the East, where plantations and orchards have expanded right to the edge of forests, he said.

Since elephants are big animals, they tend to clear the way for other animals to follow, but they also end up being the first to suffer an ill-fated end, he said.

“We are not clear yet about the real purpose of these traps, but judging from a mature elephant stepping on a nail-based trap two years ago, we believe the real intention is to harm these animals. This is scary,” Pattarapol said.

When an elephant is trapped in a snare, they struggle to free themselves, but the more they move, the more painful it becomes and sometimes the rope cuts deep into their skin, and these deep cuts are often incurable, Pattara pointed out.

“Freeing them from the trap is already tough, but treating them is even tougher,” he said. “Not all wild animals can be cured, and even if they are cured, they are not able to return to their flock or the forest due to their injuries. So, I think the best way is to prevent these traps from being set in the first place.”

On March 13, Thai Elephants Day, the department kick-started a campaign to remove all kinds of traps from forests across the nation. Pattarapol said the campaign has tried to raise public awareness about the issue, and in the long run, he hopes concerned parties will sit together and come up with a solution.

Pattarapol noted that though the issue of human-elephant conflict has already been included in the national reform plan, and is also part of the national elephant management plan, very little attention is being given to the problem with traps, which is making the situation more complicated. Hence, he said, this problem requires a more sustainable situation.

“Now people have learned and realised that a problem exists. What’s next is cooperation from them to ensure that no more harm is inflicted on the animals,” he said.