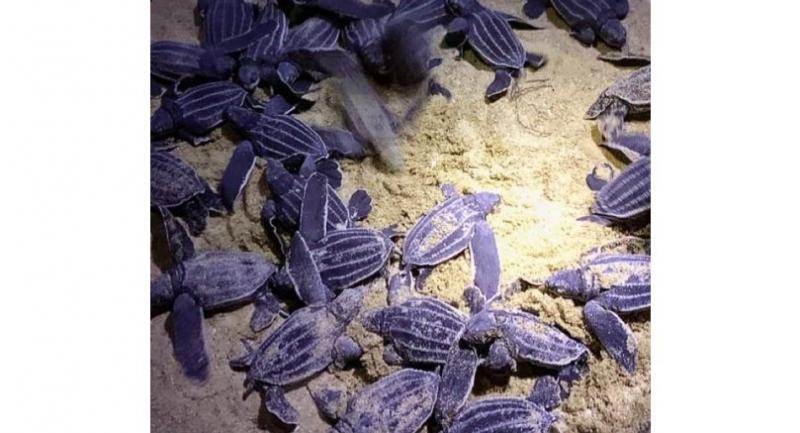 The first batch of newly hatched leatherback turtles clawed their way out of the sandy nest on Kuek Kak beach in Phang-nga in mid February. Photos courtesy of Dr. Thon and DMCR.

An old friend of Thailand has returned from the sea, but vast drifts of plastic block more leatherback turtles from coming ashore to spawn.

The news from Kuek Kak Beach on the Phang-nga coast in mid-February delighted marine ecologist Dr Thon Thamrongnawasawat as twenty newly hatched leatherback turtles had clawed their way out of their sandy nest and made it to the sea.

The baby turtles’ emergence from eggs laid in late December signalled the return to Thai waters of an endangered species after several anxious years.

There was more cheering news. Another 29 hatched soon after, although this group needed human help getting to the surface of the sand.

Altogether, 49 infants had emerged from a single mother’s 118 eggs.

“It was the first time in five years that leatherback eggs had been laid on a Thai beach,” Thon said. “We can’t say much at this point about what it actually means, but at least it’s a positive sign that the species has returned to Thai beaches. This is really good news.”

For a marine ecologist, the species’ comeback says a great deal about the conservation work that remains to be done amid continuing challenges such as the proliferation of plastic waste in the sea.

Leatherback turtles are among the marine species most sensitive to environmental threats and thus serve as effective indicators of the sea’s health. Plastic is a major hazard for them because they feed on jellyfish and can easily mistake a plastic bag for their favourite food  sources. Leatherback turtles are among four marine turtle species that are present in local waters. The others are olive ridleys, hawkbills and green turtles.

According to Thon, they spend almost all of their time in the sea, with the females emerging when pregnant to lay eggs on what appear to be carefully selected beaches.

The hatched offspring clamber into the sea and the females, fertile at around 15 years of age, will return to the place of their birth with a brood of their own. Under cover of darkness, they dig a wide hole in the sand and deposit 100 or more eggs.

In such a sensitive period,  only a beam of a single flashlight could deter them, Thon said.

The remote beaches of the Thai South were once so favoured by turtles – the sands might be pockmarked with up to 1,000 nests at a time – that concessions were commonly granted to collect the eggs for sale.

That practice ended when the egg-laying activity declined, but humans continued poaching eggs even after it became illegal.

More recent times have added the threat of tourism, with beaches on popular islands becoming overcrowded, scaring off most large marine creatures.

Meanwhile 300 sea turtles have washed ashore in recent years, many of the victims gashed by boat propellers and strangled, starved or asphyxiated by plastic they swallowed.

“From 2000 to 2015 was the worst time because there were hardly any reports of egg-laying. Marine ecologists almost lost hope,” Thon recalled in a recent Facebook post.

Turtle conservation centres and zones were designated to prevent their extinction in Thailand, raising hopes somewhat.

The National Legislative Assembly amended the law on wildlife protection to list leatherback turtles as a preserved species along with three other marine creatures, among them whale sharks.

Kuek Kak Beach is close to Thai Muang, where the sand once trembled with multitudes of hatching leatherbacks. All the effort to bring them back appears to have paid off.

The public focus has now shifted to keeping plastic waste out of the sea, further ensuring their survival. To keep it from reaching the sea, it has to be eliminated on land, or at least greatly reduced. The World Economic Forum, citing a Helmholtz Centre for Environmental Research study, last year claimed that 90 per cent of the plastic polluting the oceans – more than 8 million tonnes – is carried there from just 10 rivers.

Two of the rivers are in Africa – the Nile and the Niger – and all the rest in Asia, including the Mekong.

Thailand’s Marine and Coastal Resources Department, in statistics for 2017, found 23 coastal provinces generating 11.47 million tonnes of household trash, of which 60 per cent was “properly disposed” and three million tonnes recycled.

That left 1.55 million tonnes adrift and out of control, and 340,000 tonnes of it was plastic – mostly single-use bags, bottles and straws. The department counted 60 rivers that could potentially carry the plastic into the sea.

The Thai authorities acknowledged the problem of marine plastic two years ago, Thon said, promising the United Nations in a formal statement that they would find solutions.

Since then, Thailand has hosted national and regional meetings on the issue, vowing to its Asean partners that the amount of plastic trash would be cut by up to half in the next 10 years.

At last month’s Special Asean Ministerial Meeting on Marine Debris, the “Bangkok Declaration” to combat the problem was agreed and it would be tabled for presentation at the Asean Summit in June.

National panels on reform and strategy regarding natural resources and the environment have also addressed the issue in their plans.

And there is a sub-panel of the national environment board that is directly addressing the plastic issue, Thon said.

The panel so far has produced a road map with a timeline and goals for reducing plastic use and banning some plastic products. Among the items targeted with bans this year are cap seals, so-called oxo-degradable plastic and microbeads. Foam-based food containers and single-use plastic bags and straws are due to vanish in 2021 and 2022.

The private sector and civil society have assisted the government through public-awareness campaigns and the introduction of a “circular economic model”, Thon said.

“I think we’re on track, but it needs to be stepped up to keep pace with the problem,” he said. “And this effort can’t proceed on its own – several things need to be done in parallel. The new lease on life we’ve given animals like leatherback turtles should be a good reminder of what else needs to be done.”

The good news continues to trickle in. Three leatherbacks that laid eggs on Thai beaches since late last year have together produced 127 offspring, and one olive ridley gave birth to another 68.

But, just last week again, a mature green turtle was found dead on the shore, its stomach engorged with plastic.