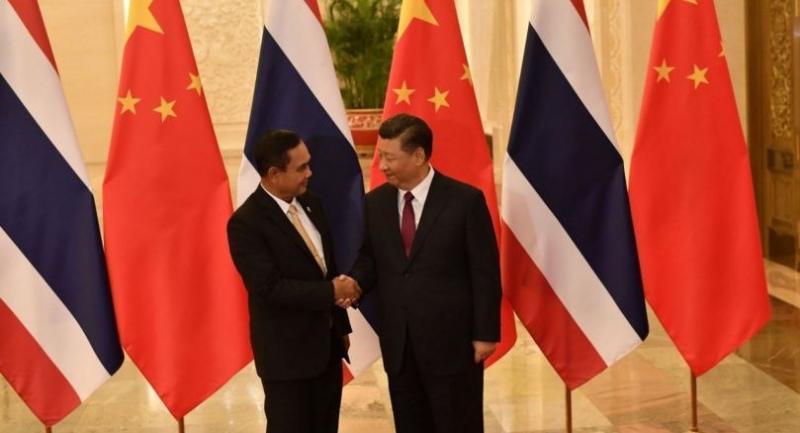 In his speech at the Belt and Road Forum for International Cooperation, the Thai premier said China’s ambitious outreach would guide the world in the years to come.

This, he cited, is also in line with Asean members’ focus on connectivity to boost cooperation and peace among them.

The connectivity, he said, could take place in four dimensions: physical, regulation, digital, as well as society.

For instance, physical connectivity through the BRI could be through development of the North South Economic Corridor and the East West Economic Corridor as well as R9, Prayut said. The R9 route starts at Da Nang in Vietnam, passing through Laos at Khwaeng Savannakhet, crossing the Second Thai-Lao Friendship Bridge to enter Thailand in Mukdahan province, and terminating in Myanmar. The route effectively connects the South China Sea with the Andaman Sea, stretching over 1,450 kilometres.

After his electoral victory last May, Malaysian Prime Minister Mahathir Mohamad cancelled some planned works and renegotiated a rail project cutting 30 per cent off the price tag.

But Mahathir said at the summit that “the Belt and Road idea is great” and he “fully” supports it.

Chinese President Xi Jinping yesterday sought to bat away concerns about his ambitious initiative, saying his global infrastructure project will have “zero tolerance” for corruption while vowing to prevent debt risks.

In a speech kicking off the BRI summit, Xi also offered soothing remarks to the US over subsidies, the yuan and trade as the two sides headed into fresh high-level talks next week.

Xi’s signature foreign policy initiative aims to reinvent the ancient Silk Road to connect Asia to Europe and Africa through massive investments in maritime, road and rail projects – with hundreds of billions of dollars in financing from Chinese banks.

It offers to bring much-needed modern infrastructure to developing countries, but critics say it is riddled with opaque deals favouring Chinese companies while saddling nations with debt and environmental damage.

“Everything should be done in a transparent way and we should have zero tolerance for corruption,” Xi said at the gathering of 37 world leaders, which ends today.

China has also rejected accusations that Belt and Road is a “debt trap” and a geopolitical tool for Beijing’s ambitions of becoming a global superpower.

“The Belt and Road is not an exclusive club,” Xi said.

In a nod to the concerns over loans, he added: “We also need to ensure the commercial and fiscal sustainability of all projects so that they will achieve the intended goals as planned.”

China is presenting a debt sustainability framework at the forum – a move welcomed by International Monetary Fund chief Christine Lagarde.

Calling for a “BRI 2.0”, Lagarde said in a speech the scheme needs “increased transparency, open procurement with competitive bidding, and better risk assessment in project selection”.

Amid warnings that some of the massive projects are causing environmental damage in Asia, Xi said China will also promote “green” development.

Eric Olander, managing editor of the non-partisan China Africa Project website, said there is no data to back up claims that BRI worsens debt problems, but US criticism has had an impact.

“I think the [Chinesese] president wants to change that narrative so he can rebrand and reposition BRI away from the debt issue and more towards China’s development story that he wants to tell,” Olander said.

Russian President Vladimir Putin, Italian Prime Minister Giuseppe Conte, whose country became the first G7 member to sign up to Belt and Road, and Pakistan Prime Minister Imran Khan are among the leaders attending the summit.

EU powers France and Germany, which have taken a careful stance about BRI, sent cabinet members, with French Foreign Minister Jean-Yves Le Drian saying the Silk Road must be “a two-way street”.

Putin called for a global response against protectionism, unilateral sanctions and “trade wars” – veiled criticisms of the United States.

Washington, which sent a senior White House official to the first BRI summit in 2017, has not dispatched any officials.

US officials have dismissed BRI as a “vanity project” and rebuked Rome for signing up to the scheme.

With US negotiators heading to China for a new round of trade talks next week, Xi repeated a pledge to increase imports and vowed to abolish “unjustified” subsidies to Chinese firms – both key US demands.

l Underscored Thailand’s role as Asean chairman by promoting connectivity in all dimensions, and express Thailand’s readiness to cooperate with China in promoting regional and sub-regional connectivity through the Master Plan on Asean Connectivity 2025 and the Ayeyawady-Chao Phraya-Mekong Economic Cooperation (ACMECS) Strategy Master Plan on the basis of trust, transparency, inclusiveness and respect of international laws.

l Called for expansion of cooperation to promote Thailand 4.0, and the Eastern Economic Corridor (EEC), and promote Thailand as the Asean hub for logistics and transport, and as Asean’s gateway to China.

l Tried to convince China to make use of ACMECS for China-Asean linkages, and for promotion of seamless connectivity among the Greater Bay Area (GBA), Pan-Pearl River Delta (PPRD) and the EEC.

Prayut is also scheduled to meet Chinese President Xi Jinping, Premier Li Keqiang and Deputy Prime Minister Han Zheng, to discuss reinforcement of relations and continuation of bilateral cooperation. There will be particular focus on connectivity, economic and digital cooperation, development of technology and innovation, China-Japan cooperation on the EEC and promotion of Thailand-China cooperation in the region and sub-region.