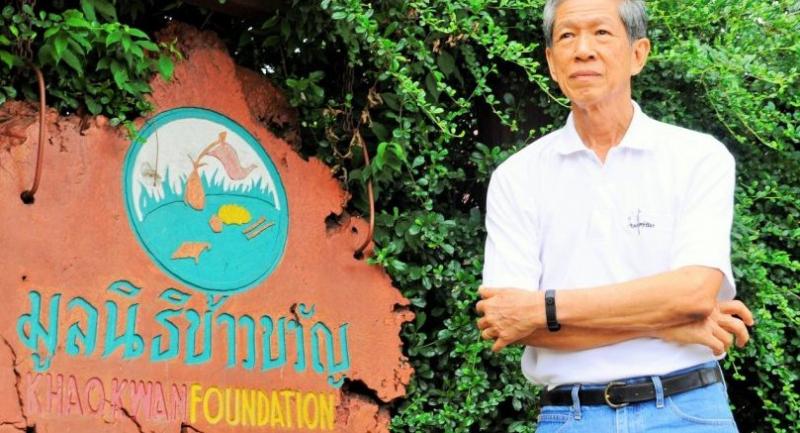 Ajarn Decha Siriphat at his foundation before the walk begins. Photos by Piyaporn Wong.

DECHA Siriphat, now in his 70s, could have had a good time taking a rest from his work, climbing up to the treehouse at his Khao Khwan Foundation in Suphan Buri, listening to Mozart’s Godspell melodies or reading good books including Dhamma as he had always done.

Instead, the 71-year-old long-time sustainable agriculture advocate turned newly-endorsed traditional medicine practitioner, has taken on a new challenge to overcome: campaigning for a new round of legal amendments to the already newly amended Narcotics Law in order to free marijuana from any obstacles preventing its use for medical purposes.

So, instead of reading Dhamma and listening to Mozart in his treehouse, the advocate is busy discussing plans with his colleagues and supporters, who will in the next few days launch the country’s first long-distance Cannabis Walk Thailand to raise public awareness on marijuana and surrounding issues.

“If people looked at me from the lens of advocacy and were stuck at my image as a sustainable agriculture advocate, they would never understand why such an advocate has decided to campaign for a plant that has the stigma of narcotics. But if they looked at me as a Dhamma practitioner, they would understand why.

“Marijuana is a more critical issue to fight for than rice, because it’s a drug. Through a Dhamma lens, people can realise what I see in it – its value to help cure people – and wish to bring out to people. This is Dhamma’s way – giving or ‘hai than’ – as I always practice through my work,” said Decha, with his voice low but firm. Decha’s work would not have been guided by Dhamma if he had not met the late revered monk, Buddhadasa Bhikkhu at Suan Mokkhaphalaram Temple in Surat Thani province, renowned for a modest middle path of Dhamma practice.

Born to and familiar with life in the rice fields as the son of a landlord in Suphan Buri, one of the country’s richest rice bowls, Decha could not know that he would one day return to his roots, working on sustainable rice production to save farmers.

Young Decha grew up playing in the rice fields of his father, which were leased to neighbouring farm families and well absorbed the lives of traditional Thai farmers. He learned about the indigenous rice varieties grown by the tenant farmers, long before he applied the knowledge to save them through his foundation’s work.

But the young Decha heavily inspired by the cowboy movies he watched, wished to ride like a cowboy and own a farmspread somewhere. He decided to pursue undergraduate study in livestock.

It took the young undergraduate from Khon Kaen University some four years to learn a cowboy’s way, working as a livestock official for the Agriculture Ministry.

Encountering injustice in bureaucratic life, Decha called it quits and moved back to his home to start his own farm. There, Decha practised a farming style similar to what is today known as sustainable farming, in which livestock are raised along with a variety of plant species to provide year-round income.

However, even as his farm was large, so were his livestock, raising concerns in mother that her son was committing bad karma, via raising and killing livestock.

Decha’s mother begged him to quit that farm and try something else, such as vegetable farming. She soon passed away and Decha decided to leave his livestock business to get ordained for her.

At Suan Mokkh, or the Garden of Liberation, Decha learned the Dhamma of Suan Mokkh’s way. And Buddhadasa Bhikkhu taught him that Dhamma could be practised anywhere when pursuing an ordinary life, and especially when working for other people.

“I didn’t know whether or not my mother could get ‘boon’ or ‘barmi’ from my monkhood, but it was good for my life. It was a turning point in my life,” recalled Decha as he reflected on his three month ordainment at the temple.

Upon returning to the layman's life, he left the livestock farm business to his brothers and turned to a new life advocating for the Appropriate Technology Association (ATA) that was inspired by the world-renowned educator EF Schumacher.

It was there that Decha said his life journey really began, both physically and spiritually.

Decha travelled a lot to help people. He also exposed himself to new knowledge, both modern and indigenous, gleaned from the people and places on his travels at home and overseas.

His work life having become serious, Decha decided to set up his own organisation to translate his own ideas into practice. He set up the Technology for Rural and Ecological Enrichment Centre (TREE) at his home to disseminate ideas about sustainable agriculture, a buzz word at that time as people had no idea what it actually was.

His centre, in the late 1980s, was turned into a foundation for sustainable rice production. Its name, Khao Khawn (the spirit and soul of the rice), was derived from the sacred ritual of morale boosting for farmers using rice as a vehicle.

But Dhamma led, and hard work does not always guarantee success. Despite successful demonstrations in several areas, not all farmers followed his example.

It was their biases as much as a lack of knowledge that blinded them from the helpful path, Decha concluded.

Over the years, and working with allies, Decha found he had to switch between the so-called “cool” work to its opposite “hot” ones in order to push for change.

While promoting sustainable agricultural knowledge, Decha and his network had to step out to fight farm chemical firms and past governments to influence their decision-making on several farm issues, including excessive use of farm chemicals.

At Khao Khawn, Decha also set up a farmers’ school as a vehicle to deliver a vision of sustainable rice farming so as to help clear their biases and empower them.

A quest for the cure

It was his family members’ cancers that drew Decha to the narcotic plant of marijuana.

His mother had died of cancer, as did his uncles. Decha later delved into the alleged curative power of marijuana in an attempt to find other medical treatment that would leave him a little more chance of surviving cancer.

Decha started to self-study medicines based on marijuana, searching the internet for knowledge and case studies. He learned how to extract marijuana oil from a Canadian man who said it had helped him cure the cancer.

But the same formula of medicine did not work when he tried it in Thailand, using it on an acquaintance who was sick with the disease.

Decha then turned to “knowledge of the East”, consulting with a monk who he believed to be self-trained in Dhamma until he possessed an intuition, the supreme knowledge to learn and know things from meditation.

Decha consulted him on using medicines made from marijuana until he obtained his own formula. Mixed with cool extracted coconut oil, some few drops of marijuana oil performed a miracle. It helped cure another patient of his after six months of use, Decha claimed.

But this came with two other rules. The patient had to cease all injurious food and items, and he or she had to hold the Five Precepts.

The injurious food and items were believed to reinforce cancers, while the Five Precepts was believed to relieve “karma” contributing to the person’s illness.

After that patient, Decha then tried using the oil himself. He started to cure his deteriorating sight and his shaking hands returned almost to normal, he claimed. Decha has since claimed the power of medicines made with marijuana and began to distribute them to others for free through temples he knew.

“From what happened, I realised that this would be the best for me, who was prone to getting cancer. And then it could cure other illnesses, so I realised that its power was unlimited in curing people. So, I started to give the medicine to others,” said Decha.

Since last year, Decha’s marijuana medicines have been distributed in a few temples in Phichit province and Suphan Buri, while he launched training classes at his foundation.

The activities were last month disrupted when he was threatened with arrest as a result of the newly amended narcotics law.

The law allows only certain groups of people to produce marijuana-based medicine, and strict conditions are imposed to ensure the safety of patients. Among those are that the healer must be a medical practitioner, using either modern or traditional knowledge.

The conditions caused several public health and consumer advocacy groups to help push for the registration of Decha as a traditional medical practitioner so he could continue producing his medicines.

However, several other hurdles – rules and procedures – must first be cleared, demonstrating how difficult it is for a single traditional medical practitioner to produce a remedy.

The groups, including the notable BioThai, decided to push for additional changes to the law, with the key message focusing on the need to ensure the right of patients to access marijuana for medical purposes without any obstacles.

The long Cannabis Walk will start on Monday and run for 20 days from Phichit province to Suphan Buri, with Decha taking the lead.

The problem, said Decha, is the viewpoint that marijuana should remain a narcotic under the law. Instead, it should be treated as a “controlled substances” in which it good properties are allowed to be utilised while its negative properties are put under control as they are with tobacco.

Decha does not place much hope that change will come within a day. People, he said, must help push for the change they want.

“For me, I’m just practising Dhamma like I always do. And as I practice Dhamma through my work as always, I think we will win because ‘the angels’ are on our sides.

“The point is to achieve a peaceful society, so any rules or regulation must be written to serve Dhamma and not greed. If not, we need to correct it.

“As the angels and Dhamma are by my side, there is nothing to fear,” said Decha, who several times in the past has confronted major interest groups while presenting his modest and calm personality.

Dr Wijarn Phanich, the country’s leading specialist in knowledge management for society, once said of Decha in the preface of the book, The Soul in Rice Grains, the Work and Life of Decha Siriphat; “A life based on the learning of Dhamma and led by Dhamma can truly transform into a life that benefits society at large, as demonstrated by Decha."