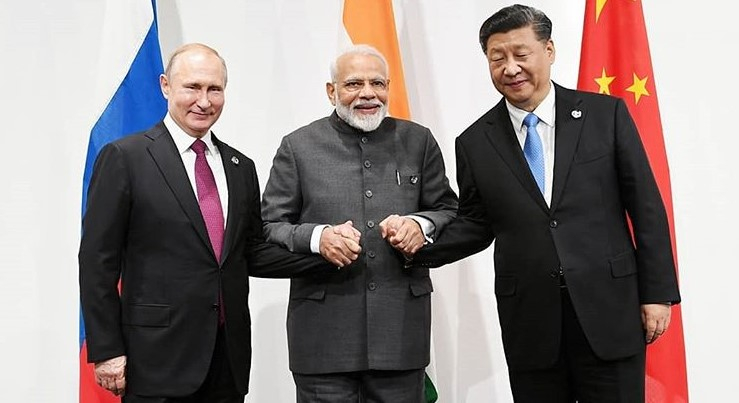 Other than the trade tensions between Japan and South Korea, there was another absorbing development at the G20 Summit in Osaka, Japan, a few weeks ago: the emergence of a Russia-India-China (RIC) grouping, three leading regional powers in Asia that used to be spearheaded by Russia in the late 20th century.

Russia is starting to envision the prospect of itself, along with India and China, leading the region, bringing about a revision from a US-led regional order to a more multilateral one.

Both Russia and China are pushing the RIC regional grouping to emphasise the importance of a multipolar Asia with focus on multilateralism, free and open markets and sidelining the Donald Trump-led US. China and Russia in particular perceive the US as a threat to the regional and world order.

This was the second RIC meeting within one month, the first one being held during the Shanghai Cooperation Organisation (SCO) in Kyrgyzstan. Indian Prime Minister Narendra Modi seems to be supportive of the RIC initiative going by the past two summits and he has also welcomed the next meeting. His speeches during the summits were quite positive, and implied that the RIC will be a crucial driver for development, politics, economy, environment, security and anti-terrorism based on their strategic partnership.

The emergence of the RIC is a watershed event in global politics. In the global geopolitical landscape in which major powers like Russia, China and the US jostle for influence, India has a pivotal role to play in South Asia. This has created a situation where India is being wooed by all sides, because of its sphere of influence. Moreover, India’s vision from both summits raised questions about whether New Delhi was inclining towards a more authoritarian order or trying to establish itself as the sole regional power.

It is understandable for some states to be cautious of India’s strategic shift, but only if they apply a US-centred logic that sees every possibility of overshadowing the US as a threat. India’s strategic thinking and foreign policy is undergoing changes that are in line with the vision it has for its future. Modi was not just present at the RIC meeting, he was also a part of another three-nation grouping -- JAI (Japan-US-India) -- as part of an Indo-Pacific regional grouping masterminded by Trump during the G20 summit.

To be clear, JAI is a trilateral grouping that was created to establish a balance of power in the Asia-Pacific region, and to contain China’s influence from spreading authoritarianism abroad. So, the JAI is focused mainly on security and is China-centred. Besides, the JAI basically lays the foundation of the quadrilateral arrangement for Free and Open Indo-Pacific Region (FOIP), which also includes Australia.

Its membership of the JAI and the RIC, which are odds with each other, reflects how Indian strategic thinking is straddling two conflicting ideas, exploiting the tensions between the West and authoritarian forces. India has found itself with a better bargaining chip than those who are struggling to emerge as regional leaders. This consequently gives India a wild card in the world’s geopolitics, opening the doors of the JAI and the RIC at the same time. In the current situation, these groupings are strategically the ones who need to have India on their side.

There might be an inherent contradiction in India’s behaviour, as the JAI and the RIC are on opposing sides of the divide. The question remains how India can fit in comfortably when these two alignments are meant to counter each other’s influence and what is India’s strategic imperative in these groupings. Actually, it reflects two strands in India’s strategic and foreign policy thinking. The first is that India is uncomfortable with China exerting inordinate influence southward towards the Indian Ocean Region, meddling with Pakistan, and employing debt-trap diplomacy with India’s neighbours. This has made India insecure about the region where it holds primacy, and that has given it reasons to align itself with the JAI led by the US.

On the other hand, the current situation between the US and India is also not that stable due to the tariff war and the curbs imposed on India’s dealings with Russia and Iran. India has the challenge of finding a strategic balance that won’t hurt its interests. Since the RIC also views India as an asset, it is geopolitical development that India can exploit and use as a negotiating power in its bargaining with the US and the West.

As an independent factor and a wild card, India can use the RIC as a vehicle to turn the situation upside down and thereby shift itself to be on a higher ground than the US. Democratic India’s decision may not be a proof of its leaning towards authoritarian forces, but it points to India’s motivation being based on its national interest.