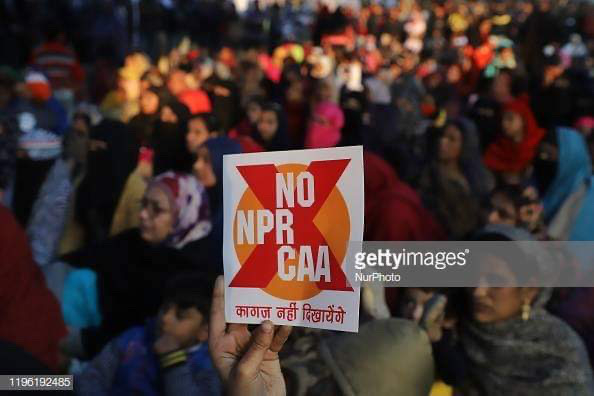 People take part in a protest against the Citizenship Amendment Act (CAA) and NRC in New Delhi on Saturday (January 25) Photo: NurPhoto via Getty Images

A widespread and unseemly controversy has broken out in India over the Citizenship Amendment Act passed by the Indian Parliament in December 2019 that fast tracks Indian citizenship for persecuted minorities in Pakistan, Afghanistan and Bangladesh belonging to the Hindu, Sikh, Christian, Buddhist, Jain and Parsi faiths.

This brings closure to a sad and messy legacy of the Partition of India in 1947 when the new, expressly Muslim, state of Pakistan was carved out of India.

There were widespread bloodshed and killings in both India and Pakistan as millions of Hindus and Sikhs migrated from Punjab, Sindh and Northwest Frontier Province of West Pakistan (now Pakistan) to India, and Muslims, mostly from Punjab, Delhi and Uttar Pradesh in India migrated to West Pakistan. Many Hindus and Sikhs living in Afghanistan also migrated to India since there was an open, undefined border and free movement of people between Afghanistan and undivided India. However, the exchange of populations was not comprehensive. Some chose not to migrate, others just couldn’t manage to do so. On the India-East Pakistan (now Bangladesh) border, although the Partition was less violent and bloody, there has been a steady inflow of Hindu refugees into India from East Pakistan/Bangladesh over the last seven decades. Religious minorities have suffered enormously in Pakistan, and to a lesser extent in Bangladesh (till recently), as well as in Afghanistan. All three countries are today officially Islamic states where Muslims enjoy special rights and privileges, while minorities continue to be discriminated against, humiliated and persecuted. Many have been forcibly converted to Islam. Women belonging to the minority communities have been raped, kidnapped, and forced into marriage with Muslims. Hundreds of Hindu and Sikh temples have been destroyed or allowed to fall into ruin. As a result, the share of minorities in these three countries has come down drastically. Thousands of people belonging to these persecuted minorities have sought refuge in India, and have been given, on an ad hoc basis, Indian citizenship. The new law merely formalises this process so that the refugees languishing here can be given Indian citizenship that would enable them to secure admissions in educational institutions, get jobs, buy property, enjoy state welfare benefits and thereby have a more secure and dignified life. This is also India’s moral obligation, one that has been publicly articulated by leaders of all political parties over the decades, including former Prime Minister Manmohan Singh, himself a Sikh refugee from Pakistan. Why then such a brouhaha? Many Indian opposition parties, frustrated at being out of power, have deliberately distorted this issue and stoked a controversy, spreading imaginary fears among Muslims in India that they would be deprived of their citizenship, even though the new law has no impact on or relevance to those who are already Indian citizens, irrespective of their religion. These parties, with an eye on their traditional, but weakening, Muslim vote bank that relies on creating insecurity among Muslims, continue to mischievously and irresponsibly conflate the Citizenship Amendment Act with a proposed National Register of Citizens, even though Prime Minister Modi has clearly and emphatically declared publicly that the process of having a National Register of Citizens will not be initiated without widespread consultations. Fears that India would no longer remain a pluralistic society are unwarranted. There is strong and widespread public support for an India where people belonging to all religions and communities feel secure and are not discriminated against. India has special legal and constitutional provisions to protect all minorities including Muslims (whose share in India’s total population has steadily risen). It needs to be plainly and unequivocally stated: Indian Muslims are an integral part of India’s society and India is their home. India is proud that some of the biggest Bollywood stars and sports icons are Muslim, as are many successful and prosperous business and industry leaders.

We also have proud and patriotic Muslim soldiers and generals, wise and fair Muslim judges, efficient and committed Muslim officials and policemen, brilliant and respected Muslim scientists and engineers. All sects of Islam can and do peaceably follow their religious practices in India. Minorities, including Muslims, manage their own places of worship and institutions, and can have their own educational institutions where their children are taught about their religions. Whatever development work is being done – roads, water supply, gas connections, housing, toilets, education, health etc – is not targeted to favour any particular community.

India remains a robust democracy, where the Constitution is supreme. There is ample room for debate and opposition, and an established legal and judicial process for redressal of grievances. While peaceful protest is acceptable, violence is not. People should be held accountable if they destroy public property and attack police personnel and institutions. Everyone must respect the institution and authority of Parliament. Street mobs and political rhetoric cannot undo laws that have been duly legislated by Parliament after an open debate. Nor can state governments and legislatures defy laws that, under the Indian Constitution, are the remit of Parliament. One hopes that all political parties will act responsibly and channelise public opinion in a constructive direction.

(The writer is a former ambassador of India)