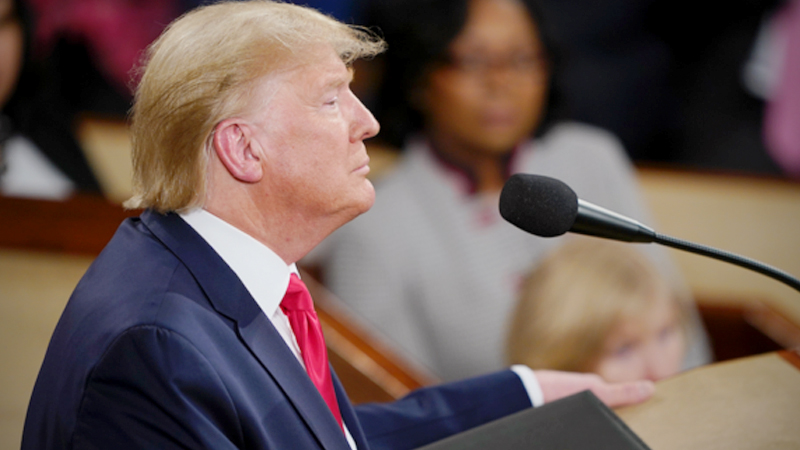 WASHINGTON - He didn't hurl insults, lead "Lock her up!" chants or stride onto the dais to the opening thrums of "God Bless the U.S.A." blaring from speakers. But President Donald Trump's State of the Union address Tuesday night amounted to a more subdued version of one of his raucous campaign ralli

He boasted that his accomplishments were like nothing ever seen before, promoted divisive policies - even prompting audible boos at points - and added reality-show flourishes to the speech he delivered in the historic House chamber.

He goaded the Democrats, began the evening with an apparent snub of House Speaker Nancy Pelosi, D-Calif., and offered a boastful accounting of the previous three years that could easily double as the campaign promises he plans to deploy in the coming one.

And if Trump at least made a listless effort to channel some of the presidency's soaring rhetorical rhythms, the lawmakers in the ornate chamber didn't even pretend to try to rise above the bitter partisanship that has riven the presidency, Congress and the nation.

Republicans cheered divisive lines, some Democrats walked out while Trump spoke, and Pelosi punctuated the night by tearing up the president's speech while standing over his left shoulder as he wrapped up his remarks.

"This is a big night, a cleaved-down-the-middle night with no one trying to hide the divide," tweeted Peggy Noonan, a Wall Street Journal columnist. "No ameliorating courtesy, no enacting of formal regard. Just the great divide, unbidden and out there for all the world to see."

The president entered the House chamber to Republican cheers of "Four more years," his party helping to set the tone for an address largely delivered as written, from the teleprompter, that nonetheless managed to strike slightly more restrained notes of his usual "Make America Great Again" rallying cry.

Trump touted his fulfilled promise to replace the North American Free Trade Agreement with the U.S.-Mexico-Canada Agreement, newly signed into law, and he crowed about his creation of Space Force - the newest branch of the U.S. armed forces. He spoke of pushing NATO allies to pay their "fair share."

And he went on an extended riff about illegal immigration, rhapsodizing about the "over 130 legislators in this Chamber" who he said favored "providing free taxpayer-funded health care to millions of illegal aliens" - as Pelosi shook her head behind him and mouthed, "Not true. It's not true."

In other moments, he was even more overt, making two distinct references to socialism - a not-so-veiled attack on the more liberal wing of the Democratic Party and primary field, which Trump and his allies have worked to paint as radical leftists.

"Socialism destroys nations," Trump said at one point, after introducing Juan Guaidó, the Venezuelan opposition leader who was one of his and first lady Melania Trump's special guests. "But always remember: Freedom unifies the soul."

Later, talking about health care, Trump again returned to the same theme, exalting: "To those watching at home tonight, I want you to know: We will never let socialism destroy American health care!"

The body language, too, told the tense story of an address to the nation in the very same House chamber where the president was impeached less than two months prior, and just across the Capitol from the Senate chamber, where Trump is all but certain to be acquitted Wednesday of those charges.

The slightly incongruous tableau was the result of superimposing a 2020 campaign rally against the sumptuous backdrop of a governing body that still feigns civility.

Trump tugged at his lapels as he walked onto the dais, a more restrained version of the peacocking he often does before launching into a speech on the campaign trail. He did not shake - seemingly deliberately - Pelosi's outstretched hand, prompting her to withdraw it with a surprised gasp and a smile. And at least twice, he lightly pumped his fist at an audience member to whom he gave a shout-out.

The Democrats, meanwhile, could barely contain their resentment.

When Trump urged lawmakers to send him a bill to lower prescription drug prices, promising he would "sign it into law without delay," some Democrats leaped to their feet and, holding up three fingers, began chanting "H.R. 3! H.R. 3!" - an allusion to a House-passed bill that would help do just that.

Rep. James Clyburn, S.C., the third-ranking House Democrat, at times slumped in his seat, and even refused to clap when Trump recognized in the audience Charles McGee, one of the last surviving Tuskegee Airmen, the first black fighter pilots. The president announced his promotion of McGee, who had recently celebrated his 100th birthday, to brigadier general.

Pelosi, too, seemed aggravated at moments by the spectacle unfolding before her. At one point, when Trump exhorted, "We must always remember that our job is to put America first," the House Democratic leader clapped, then shook her head and half-lifted her arms, as if to wonder aloud how, exactly, she was supposed to act when Trump said something seemingly innocuous and patriotic - "put America first" - that also happened to be a campaign refrain and controversial foreign policy dictum.

Despite the decorous setting, Trump also managed to imbue the evening with some reality-show theatrics.

After introducing a single mother from Philadelphia hoping to get her fourth-grade daughter into a better public school, Trump declared, "I can proudly announce tonight that an Opportunity Scholarship has become available, it is going to you, and you will soon be heading to the school of your choice!"

He lauded Rush Limbaugh - the controversial and conservative talk radio host who was just diagnosed with late-stage lung cancer, and who attended the speech as a guest of the Trumps - and announced that he was giving him the Presidential Medal of Freedom, the nation's highest civilian honor.

And then, in the upper rows of the House chamber, Trump asked Limbaugh to stand so the first lady could adorn him with the medal, right there on live television.

Finally, Trump introduced Amy Williams, the military spouse of Sgt. 1st Class Townsend Williams, who is serving in Afghanistan on his fourth deployment. As the cameras panned to Williams, standing with her two young children, the president announced a final surprise: that her husband was there. Nearly the entire chamber rose as he walked through the gallery doors for an emotional reunion with his family.

Though Trump never raised the specter of impeachment - nor his coming acquittal - he projected the confidence of a man about to get away with what Democrats largely view as high crimes and misdemeanors, but what he calls a "perfect" phone call with the president of Ukraine.

The president had other reasons to feel confident. A Gallup poll released Tuesday showed his job approval rating at 49%, his highest in the poll since he took office. Among Republicans, his approval rating rose to 94% - up six points since early January, and yet another tangible indication of his complete and takeover of the Republican Party.

And the debacle that unfolded Monday night into Tuesday morning in Iowa, with the Democrats plagued by technical difficulties and unable to produce a clear caucus result, further buoyed the president, who spent much of Tuesday morning gleefully tweeting about the Democratic travails.

"The Democrat Caucus is an unmitigated disaster," Trump wrote. "Nothing works, just like they ran the Country."

He concluded: "The only person that can claim a very big victory in Iowa last night is 'Trump.' "

Of course, there is nothing triumphant about being impeached, even if it does not end with the president being removed from office. Trump is only the third president to be face such a public rebuke - a historical asterisk, a scarlet "I" or, as Trump himself might say, a "very, very nasty" blemish.

But Trump is all but certain to spin his forgone acquittal into a grand victory, just as he claimed - falsely - that the inconclusive 448-page report by special counsel Robert Mueller was a "complete and total exoneration."

And on Tuesday evening, in the House chamber, both sides seemed determined not to give an inch.

Toward the end of the speech, Pelosi had Trump's written remarks laid in front of her in four piles, and as he finished, she picked up each pile and ripped it in half.

"It was the courteous thing to do considering the alternative," Pelosi told reporters as she exited the chamber and headed to her office.

Ashley Parker is a White House reporter for The Washington Post. She joined The Post in 2017, after 11 years at the New York Times, where she covered the 2012 and 2016 presidential campaigns and Congress, among other things.

Tags:
Trump's State of the Union