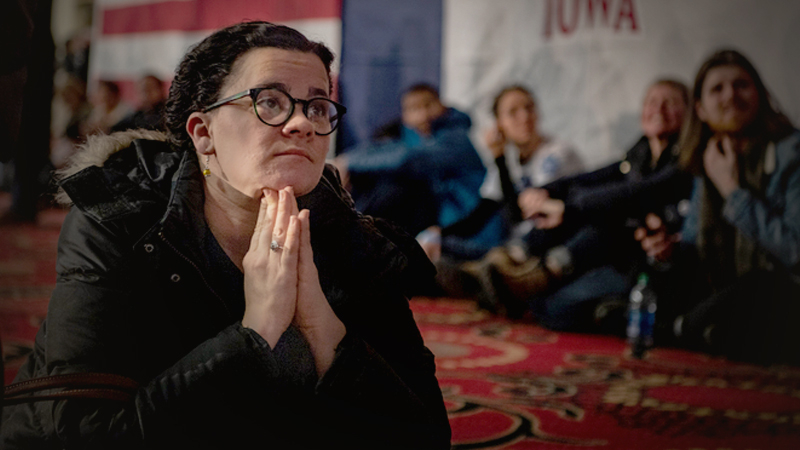 DEMS-ANALYSIS: In their quest to find a challenger to oppose President Donald Trump, Democrats are on a perilous course. Less than a month into the primary-caucus calendar, they risk an acrimonious split in their ranks and the threat of a contested national convention that together could sink their hopes of winning in November. There seems no easy path forward.

That the Democratic nomination campaign has come to this was never in anybody's calculus, certainly not as the party made the turn from its success in retaking the House during the 2018 midterms and looked ahead to 2020. A confluence of factors brought the party to this point, among them the record-large field of candidates, the underperformance of former vice president Joe Biden, the post-heart attack revival of Bernie Sanders and an electorate united in trying to defeat Trump but fractured over who can do that and the hangover from impeachment.

A year ago, the size of the Democratic field was being celebrated as a sign of the party's vibrancy, energy and diversity. The field included more women than ever and more candidates of color in the competition. There were governors, senators, House members, mayors and business people. There were big names and no-names. Ultimately there were too many of them for most voters. More choices don't always mean better or easier choices.

Voters in Iowa and New Hampshire, who generally got the first look at the field, turned out in big numbers to see the candidates. Even the most diligent found the selection process overwhelming. Voters uniformly said they were prepared to vote for almost anyone who became the nominee but struggled to decide who that should be. They liked a lot of the candidates but didn't truly love any.

As large as the field was, Biden's entry kept out some politicians who were considered attractive and fresh. Populist Sen. Sherrod Brown, D-Ohio, said his decision not to run wasn't influenced by Biden's decision to run, but the incentive for him to get into the race would have been greater without the footprint of a former vice president in the path ahead. Some people were urging Mitch Landrieu, the former mayor of New Orleans, to run in 2020. He declined, seeing Biden as the party's best hope.

Biden was never the perfect candidate. Democrats who knew and respected him also worried about whether he was up to the task of winning the nomination and defeating Trump. But he had the experience of decades to claim he could settle the country and do the job. For most of 2019, the polls were his friend. Then the voters in Iowa and New Hampshire blew them up.

Biden's collapse changed the course of the campaign. What might have been at this point a two-person race between Biden and Sanders is now a free-for-all but with Sanders at the head of the pack. Had Biden done what he needed and hoped to do, there would have been less attention given to Mike Bloomberg, the former New York mayor, and the unprecedented spending of his campaign.

There would have been less attention to the ups and downs of Sen. Elizabeth Warren, D-Mass., or to whether Sen. Amy Klobuchar, D-Minn., could really go the distance. There would have been some attention to former South Bend, Indiana, mayor Pete Buttigieg because he alone was performing far above expectations, but not as much. Had Biden struck early, others might have melted away.

Now all are in, tenuously perhaps, but in. Biden could be revived by Nevada and South Carolina or his hopes further dashed. Klobuchar and Buttigieg will face serious questions about their candidacies if they stumble badly in the near term. Warren has yet to translate energy and organization into votes. Her debate takedown of Bloomberg gives her one more opportunity.

The path Sanders has followed was both prescribed and unexpected. His campaign long ago plotted a strategy for winning, which included victories in Iowa, New Hampshire and Nevada, survival in South Carolina and a big strike on Super Tuesday. He is on track, and by the day after Super Tuesday he is expected to hold a lead in pledged delegates. The question is how big that lead will be.

That he has stayed on this path came only after wholly unexpected turns. His grass-roots cash machine never deserted him, but still he appeared to be in political trouble through the late summer and early fall, regarded by his critics as a bit of a relic from 2016 as attention turned elsewhere.

Then came his heart attack in October. At that time, the odds of him having to quit the race seemed higher than the odds of him being where he is today. He is giving the party establishment shivers, and officials are beginning to worry about managing a national convention in Milwaukee that could go beyond the first ballot for the first time since 1952.

The Democrats' angst comes at a time when the president, in the aftermath of impeachment, is emboldened. He is moving to purge enemies, meddle in the affairs of justice and tighten his grip broadly on the government. His western swing, as The Washington Post's Ashley Parker reported, was the embodiment of a president unleashed and unabashed. His approval rating in the latest Post-ABC News poll stood at 43% with 53% disapproving. But in Gallup's tracking, as of the beginning of last week, his ratings stood at 49% positive, 48% negative - the first time in his presidency that he was net positive.

Three events before Super Tuesday will shape some of what happens to the Democrats that day: the results from Nevada, Tuesday's debate in Charleston, South Carolina, and next Saturday's South Carolina primary. Iowa and New Hampshire have produced surprises, and these events also could do that, including a possible Biden revival or one of the others in pursuit of Sanders showing unexpected strength in a diverse electorate.

Bloomberg, who isn't on the Nevada or South Carolina ballots, saw his stock take a beating at last week's Las Vegas debate. He will try to bounce back at Tuesday's debate in Charleston. On Friday, he reversed course on one issue that hung him up in Nevada, announcing he was releasing three women from nondisclosure agreements. He probably hasn't heard the last of that issue or others that put him on the defensive in Las Vegas.

On Super Tuesday, candidates will compete for 1,357 delegates, 34% of all the pledged delegates that will be allocated during the primaries and caucuses. California alone will award 415, with an additional 223 in Texas and 110 in North Carolina. Two big unknowns are how many candidates will win more than a handful of delegates that day and whether the results push some candidates out of the race.

Then the overriding question will be whether any candidate can get to 1,991 pledged delegates before Milwaukee. Terry McAuliffe, the former governor of Virginia and past chair of the Democratic National Committee, posed the question of the hour the other day: "Who can get 50 [percent] plus one?" he asked. "Nobody has shown they can go beyond their base. No one's shown they can bring all the elements of the party together."

Absent that, Democrats will remain divided and speeding toward a damaging collision.