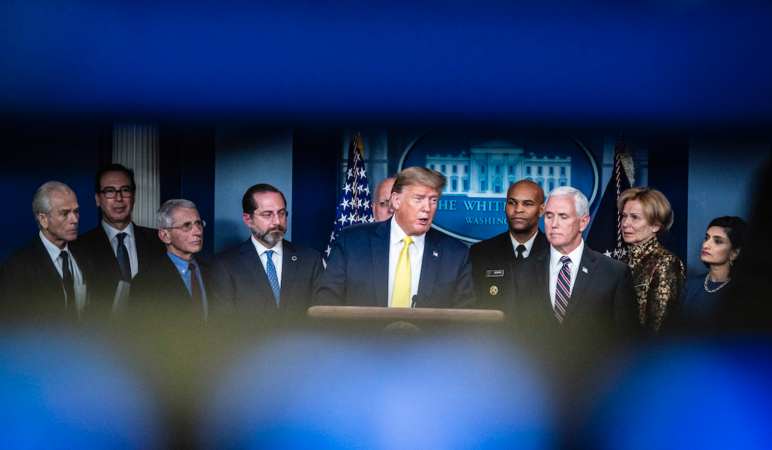 In the most scripted of presidential settings, a prime-time televised address to the nation, President Donald Trump decided to ad-lib - and his errors triggered a market meltdown, panicked travelers overseas and crystallized for his critics just how dangerously he has fumbled his management of the coronavirus.

Even Trump - a man practically allergic to admitting mistakes - knew he'd screwed up by declaring Wednesday night that his ban on travel from Europe would include cargo and trade, and acknowledged as much to aides in the Oval Office as soon as he'd finished speaking, according to one senior administration official and a second person, both with knowledge of the episode.

Jared Kushner, his son-in-law and senior adviser who has seized control over some aspects of the government's coronavirus response, reassured Trump that aides would correct his misstatement, four administration officials said, and they scrambled to do just that. The president also told staffers to make sure other countries did not believe trade would be affected, and even sent a cleanup tweet of his own: "The restriction stops people not goods," he wrote.

Other administration officials rushed to alert the public that U.S. citizens would be exempt from the travel ban, after scores of Americans, upon digesting Trump's speech, phoned government offices and raced to airports in Europe out of concern that they would not be able to fly home.

Trump's 10-minute Oval Office address Wednesday night reflected not only his handling of the coronavirus crisis but, in some ways, much of his presidency. It was riddled with errors, nationalist and xenophobic in tone, limited in its empathy, and boastful of both his own decisions and the supremacy of the nation he leads.

Futures for the Dow Jones industrial average fell in real time with virtually each word Trump uttered, signaling a lack of confidence among investors that he had control of the crisis and previewing another bloodbath once the markets opened Thursday morning.

Trump - who believed that by giving the speech he would appear in command and that his remarks would reassure financial markets and the country - was in "an unusually foul mood" and sounded at times "apoplectic" on Thursday as he watched stocks tumble and digested widespread criticism of his speech, according to a former senior administration official briefed on his private conversations.

This official, like many others interviewed for this story, spoke on the condition of anonymity to share sensitive information or make candid assessments.

Ben Rhodes, a senior White House aide who helped former president Barack Obama script and manage his responses to numerous crises, predicted that Wednesday night's address will stand as "the moment people associate with the fact that Donald Trump failed the biggest test of his presidency."

"I think we'll look back on this as a defining moment of the Trump presidency because it speaks to larger concerns that people already had about Trump - that he can't tell the truth, that he doesn't value expertise, that he doesn't take the presidency seriously enough," Rhodes said.

As often is the case after Trump gives a major speech, his Republican allies offered a chorus of praise on television and social media for his "fantastic speech" and "decisive actions" and "unique strength."

Inside the White House, however, aides and advisers privately acknowledged that Trump failed to accomplish the primary goal of his speech - reassuring the nation - and described it as disappointing and far from his best performance.

Trump's speech contained at least two errors and a significant omission. He said the travel ban would apply to cargo; it did not. He said health insurance companies would waive patients' co-payments for coronavirus testing and treatment; industry officials later clarified that they would waive payments for testing only. And he did not fully explain the details of his travel restrictions, leaving out the fact that U.S. citizens would be exempt.

The president's remarks were devoid of much substantive information on other matters. Trump provided no update for citizens on the spread of the virus, nor on the availability and results of testing.

Public health experts have said testing citizens for the coronavirus is essential for identifying new cases and limiting its spread, but the nation has experienced a chronic shortage of test kits after weeks of failures by the government. Trump devoted only two short sentences to the topic, and they were vague: "Testing and testing capabilities are expanding rapidly, day by day. We are moving very quickly."

Stylistically, the president himself seemed ill at ease in the formal setting, offering a monotone and labored delivery from behind the Resolute Desk, twiddling his thumbs and even, in moments, struggling to read words on the teleprompter. One senior administration official said Trump's heart was not in the speech.

"It was jolting," said Julian Zelizer, a presidential historian at Princeton University. "People are naturally scared. People want to see a leader who has a commanding presence. In some ways, the country is worse off after a message like that."

The speech itself was rushed. After weeks of playing down the coronavirus' threat to the United States, Trump was reluctant to appreciate the full scope of the crisis on his hands. But with the markets in free fall, he decided early Wednesday that he wanted to give the televised speech that night, administration officials said. This startled some of his aides and set off a frantic scramble to arrange airtime on television networks, iron out logistics for his delivery and prepare a draft of what he would say, the officials said.

"This was a real missed opportunity to not just have a couple of sentences in there about how other people need to put partisanship aside and come together, but to really show it," the former senior administration official said, noting that Trump could have sought to rise above the politics of the moment to convey a sense of unity and common purpose.

"The speech almost writes itself in a way," this person added. "It can be kind of formulaic. It's not rocket science."

The speech was largely written by Kushner and senior policy adviser Stephen Miller, who were still making tweaks to the text until moments before Trump delivered it, according to people familiar with the process. Thirty minutes before Trump appeared live on camera, a final draft of his remarks still had not circulated widely within the White House, one of those people said. And senior health experts in the administration did not review a final draft of the remarks, according to a senior administration official.

While Kushner and Miller crafted the remarks, a coterie of other officials were involved in the process and joined Trump in the Oval Office to watch his delivery. One person with knowledge of the speech said they included Vice President Mike Pence, Ivanka Trump, Treasury Secretary Steven Mnuchin, Health and Human Services Secretary Alex Azar, and a sizable group of White House aides Christopher Liddell, Eric Ueland, Dan Scavino, Hogan Gidley, Judd Deere, Johnny McEntee, Tony Ornato and Nick Luna.

Some officials faulted the rushed timeline for the messy speech, which they said could have been delivered even sooner, as it became clear the virus was well on its way to becoming a global pandemic - a designation the World Health Organization officially bestowed upon the coronavirus Wednesday. "Everyone usually gets [Trump] where he needs to be within a couple of days," one official said. "The problem is we don't have a couple of days."

Kushner only recently became involved with the administration's virus response, beginning to attend meetings in his capacity as a senior adviser, but inserted himself more fully as he became increasingly convinced that more tangible action was needed. He supported Trump's decision to ban most travel from Europe for 30 days and has pushed for further concrete steps, some of which are expected to be announced in the coming days.

There was some frustration among other White House aides at the sudden involvement by Kushner, who they viewed as simply parachuting in and whose vast portfolio - including Middle East peace negotiations, immigration and the reelection campaign - has been the subject of mockery in some circles.

The travel ban has been criticized by some experts for being largely ineffectual at this point considering the virus already has spread throughout the United States, as well as the fact that Trump exempted the United Kingdom, meaning anyone trying to fly to America from Europe could simply get to London first.

Tom Bossert, Trump's former homeland security adviser, was sharply critical of the measure, saying it would have been helpful earlier but now the key focus should be on community mitigation, such as closing schools or quarantining sick individuals.

On NBC's "Today" show Thursday morning, host Savannah Guthrie read Pence - who is overseeing the administration's coronavirus response - a snippet of a Trump tweet in which the president accused "the Fake News Media and their partner, the Democrat Party" of trying to "inflame the CoronaVirus situation."

"There's been some irresponsible rhetoric," the vice president told Guthrie, before going on to praise Trump for his concern for the health and well-being of the American public.

It was initially unclear if Pence was perhaps criticizing his boss for the president's own "irresponsible rhetoric." But when asked, an aide to the vice president quickly insisted that he was not.