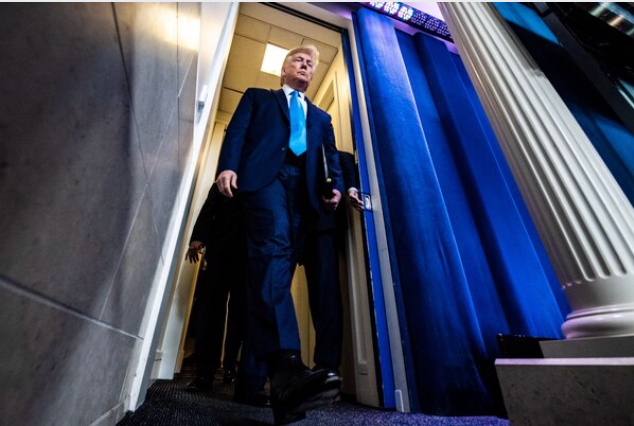 President Trump arrives to speak with the news media about the coronavirus pandemic on April 7, 2020. MUST CREDIT: Washington Post photo by Jabin Botsford.

By Special To The Washington Post · Joshua A. Geltzer · OPINION, OP-ED

The coronavirus pandemic is surfacing a distinctively Trumpian form of federalism. Call it "corona-federalism."

All three of its key features run counter to key traditions of the U.S. political system: Corona-federalism involves blaming the states for the federal government's failures; playing favorites among states when it comes to spending federal resources; and indulging states that privilege their own citizens over those of other states to the point of excluding the latter. It's an unprecedented vision of federalism that's rotten to its core - and it's costing American lives with each passing day.

Corona-federalism blames the states for the failures of the federal government under President Donald Trump. Americans are dying from shortages of medical supplies to test for the coronavirus, to treat those hit hardest by it and to protect medical professionals on the front lines of this struggle. Addressing a pandemic is a quintessential federal responsibility: It is a national security threat; it transcends state borders; and it demands a coordinated response, including through distinctly federal mechanisms like aggressive use of the Defense Production Act to mobilize the private sector.

But, astonishingly, Trump has invoked a contorted form of federalism to suggest that the federal government is merely the second line of defense and that states should be fending for themselves. "Remember, we are a backup for them. The complainers should have been stocked up and ready long before this crisis hit," he tweeted. This is a far cry from the leadership Americans have - rightly - come to expect from the federal government, and the presidency in particular, epitomized by President Harry S. Truman's famous motto, "The buck stops here." With corona-federalism, Trump blames the states for his own failings, then passes the buck.

Trump is also playing states off one another for his affection, rewarding the generally Republican (or swing) states whose governors grovel at Trump's feet and punishing the generally Democratic states that speak the truth about Trump's failures and fight for lifesaving resources for their citizens. Federalism - real federalism - has long been heralded as providing the opportunity for experimentation among the states. As Supreme Court Justice Louis Brandeis famously put it, "It is one of the happy incidents of the federal system that a single courageous state may, if its citizens choose, serve as a laboratory; and try novel social and economic experiments without risk to the rest of the country."

But Trump perverts that notion into a reality-show-like competition in which governors try novel experiments to curry favor with him, to the detriment of the rest of the country. The results are stark: States with governors most closely allied with Trump - such as Florida and Oklahoma - have received all they've asked for from the federal government or more, while states with governors openly critical of Trump's coronavirus failures - such as Illinois, Maine and Massachusetts - have received only fractions of their requests. This isn't the vision of federalism Brandeis laid out; it's straight from "The Apprentice."

Trump's version of corona-federalism cheers along when states act like their citizens are the only ones who matter. The most notable example was Florida Republican Gov. Ron DeSantis, who said that his state would accept Floridians onboard cruise ships seeking to disembark there after passengers tested positive for the coronavirus, but would refuse entry to residents from other states (or countries), even though leaving them onboard could risk their lives. This bold step built on DeSantis' other decidedly Florida-centric actions, like enriching the state's coffers at the expense of the nation's health by leaving Florida beaches open for spring break travelers and then insisting that New Yorkers were to blame for the virus's spread in Florida.

The traditional kind of federalism can have an upside in the pandemic. As the federal government has denied the threat of the coronavirus outbreak and utterly failed to respond, a laudable form of "homeland security federalism" is emerging. Forward-looking governors and mayors are stepping up and doing more to protect their residents than the federal government.

Consider governors such as New York's Andrew Cuomo (Democrat), Ohio's Mike DeWine (Republican) and Maryland's Larry Hogan (Republican), as well as mayors such as Washington D.C.'s Muriel E. Bowser (Democrat): Their rhetoric and, in some cases, exercise of legal authorities have accelerated the type of social distancing that can flatten the curve and give America's health infrastructure a better chance to handle the intense demand made of it. States are showing lifesaving generosity to each other, with Washington sending ventilators to New York, where they are desperately needed. California is also calling for states to organize to jointly acquire personal protective equipment rather than to bid against one another.

Ultimately, Trump's unprecedented corona-federalism raises a fundamental question of what leadership the American people should expect from their president - as head of the United States government - in a crisis. This is the same question raised by the puzzling answers given first by White House adviser Jared Kushner and then by Trump about for whom the federal stockpile of medical resources is intended, if not the very states that make up our nation and their residents. When faced with crises, the best of our past presidents have united Americans, as hard as that can be amid widespread fear and suffering. But Trump shows a different instinct: to divide us and pit us against one another. That's not federalism any legal scholar would recognize. That's Trump's own corona-federalism.

Geltzer, a former Justice Department and National Security Council lawyer, is executive director and professor of law at Georgetown's Institute for Constitutional Advocacy and Protection.