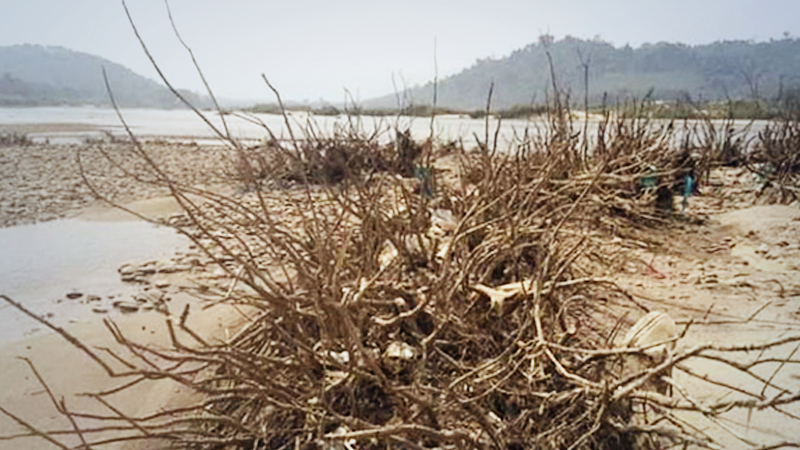 By Michael George DeSombre
Special to The Nation

I first heard about the beauty of the Mekong River (or Mae Nam Khong) long before I moved to Asia. American and Thai people share a common respect for our rivers. I grew up near the Mississippi River, which plays a huge role in the folklore of America and has been an economic lifeline throughout our history. In the language of the Native Americans who named it, Mississippi means “Father of Waters”. It’s a reflection of our affinity that Mae Nam in Thai means “Mother of Waters”.

The Mekong is not the property of any one country. It runs through China, Myanmar, Laos, Thailand, Cambodia, and Vietnam, bringing with it nutrients and life itself. Its sediment sustains fish that swim in it and fertilises the soil along its floodplains. Those fish and soil nourish the 70 million people who call the lower Mekong region home.

This past year, lower Mekong countries experienced the worst drought in a decade. Though there might be many contributing factors for the drought, a recent study shows that the Mekong is choked by a spree of dam building upstream that disrupts downstream flows. The river has been at its lowest levels in many decades – a gauge in Chiang Saen, Chiang Rai province, recorded its lowest level ever last year, despite satellite data indicating plentiful water available in upstream China. This raises important questions, including why more water did not flow from China when the Mekong countries were in great need.

Thai civil society organisations have raised concerns about China’s efforts to dam the river and blast the stretch of it between Thailand and Laos, but are lectured with promises of “win-win solutions” that never materialise. The Thai government noted these concerns, halting plans to blast and dredge parts of the river on the Thai border, raising water concerns directly with China, and calling for greater scrutiny of dam operations along the Mekong. We support the Thai people and the Thai government’s efforts.

Scarce water resources are only part of the problem afflicting Thailand’s Mekong border region. Criminal groups, including some based in neighbouring special economic zones and casinos, use the Mekong as their major artery to traffic drugs, wildlife, and even people. The United Nations Office on Drugs and Crime (UNODC) confirms that transnational organised crime syndicates have moved into the Golden Triangle, increasing the production and transport of illegal drugs from sites across the Mekong in Shan State, Myanmar and laundering their profits through the regional casino industry. The UNODC estimates the value of transnational organised crime in the Mekong region to be over $100 billion (Bt3.2 trillion) annually, with human trafficking believed to account for over $9 billion. China has cited combatting organised crime as a reason for its extraterritorial river patrols in Laos and Myanmar, although it has not been able to stem the flow of precursor chemicals from China to Myanmar which fuel the methamphetamine epidemic in Asia and much of the violence and crime in the Golden Triangle. The region’s surge in transnational crime has caused local communities to fear the loss of security in addition to their culture and way of life.

The United States is helping Thailand protect its borders and pursue a safer and more prosperous future for the Thai people. Since 1963, the US Drug Enforcement Administration (DEA) has supported the Thai government’s efforts to stop the smuggling of controlled substances into Thailand, the United States, and the international market. Earlier this month, the DEA assisted an operation against five drug trafficking networks with money laundering operations worth over Bt3 billion. In 2019, the US government supported Thai law enforcement in seizing over nine tons of methamphetamine and 43 million yaba pills. The Federal Bureau of Investigation, the Department of Homeland Security, United States Agency for International Development (USAID), and the State Department are doing their part to combat human and wildlife trafficking and secure Thailand’s borders. Last year, Secretary of State Mike Pompeo announced a further Bt420 million to counter transnational crime and trafficking in the Mekong region.

Secretary Pompeo also announced approximately Bt60 million for the Mekong Water Data Initiative to empower Mekong researchers to share data on water flows. Through the SERVIR-Mekong programme, an initiative between USAID and the US National Aeronautics and Space Administration, publicly available satellite data will help the lower Mekong governments reduce vulnerability to drought, flooding, and transboundary water competition exacerbated by upstream dams. Last month, the Mekong River Commission launched the Drought Early Warning portal, an online platform co-developed with SERVIR-Mekong, that lower Mekong countries can use as an early warning system to forecast and monitor drought in the region.

These are just a few of the many initiatives we are implementing jointly with the Thai government and lower Mekong countries to uphold the rule of law, combat transnational crime, and protect water resources through scientific data that promotes honest discussions and resolutions on how to equitably distribute water resources.

To the next 200 years of friendship

(The author is the US ambassador to Thailand)