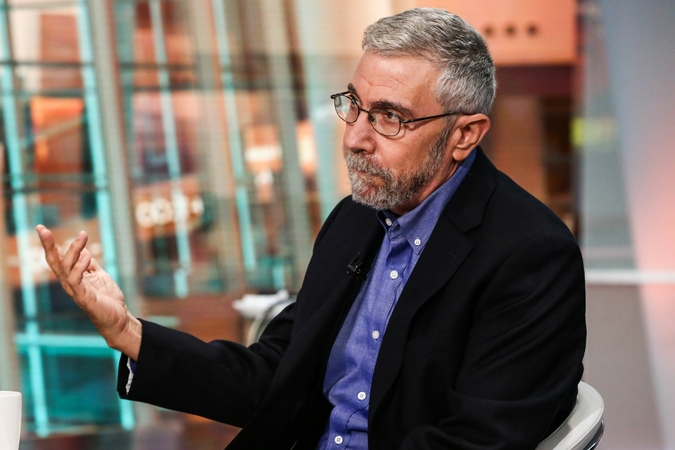 Paul Krugman during a Bloomberg Television interview in New York on Tuesday, Aug. 16, 2016. MUST CREDIT: Bloomberg photo by Christopher Goodney

Paul Krugman is one of the world's most influential and provocative economists. Although Krugman made his professional mark in academia, where his work on trade and economic geography earned him a Nobel prize in 2008, it is his commentary that has brought wider public recognition.

Last week, Bloomberg Opinion writer Noah Smith interviewed Krugman online about the state of the U.S economy in the midst of the coronavirus crisis. This is a lightly edited transcript of their conversation.

Q: This pandemic, and the resulting economic slowdown, don't look much like the Great Recession -- or any recession since high-quality economic data has become available. How should we think about this unprecedented event? Can we model it as a demand shock, like the last downturn? Are there any simple models here to guide us?

A: Is this a demand shock or a supply shock? Yes. And no. The aggregate-demand-aggregate-supply framework doesn't work well for this crisis, because it assumes that the economy can reasonably be represented as producing a single good -- a fine approach most of the time, but not now.

What's happening now is that we've shut down both supply and demand for part of the economy because we think high-contact activities spread the coronavirus. This means we can't just use standard macro models off the shelf.

But it's not all that hard to produce two-sector models that use many of the same strategic simplifications we've used in the past. I've seen really nice work on the question of whether the lockdown in some sectors spills over into recession in other sectors (Veronica Guerrieri et al.), and whether and how it produces financial market spillovers (Ricardo Caballero and Alp Simsek). I'm finding these approaches really helpful as a lens for viewing the data and the policy response.

That is, I don't feel analytically at sea here. Even though this crisis is really different from anything we've seen before, my sense is that we've got a pretty good handle on the economics. In particular, we know enough to understand why conventional responses like stimulus or tax cuts are inappropriate, and why we should be focusing on safety-net issues.

Q: So typical stimulus isn't the goal here, and instead we're merely alleviating human suffering while we wait for the shock to end. But that raises an important question: What are the constraints on government action here? In a normal, demand-based recession, there's little risk of inflation from monetary or fiscal policy because the demand shortage is acting to push prices down. But in this situation, it's not clear which way the shock is going to push prices -- the model of Guerrieri et al., for example, is ambiguous on this point. So should we worry that enormous deficits and Federal Reserve asset purchases might stoke a runaway inflation spiral?

A: In principle it could indeed go either way. People with intact incomes could be switching to unconstrained goods and services rather than postponing spending, so that aid to the unemployed could be inflationary. But that's not what we seem to be seeing. It looks as if the private sector surplus has risen by enough to accommodate public deficits, with room to spare -- that is, it's deflationary.

One big reason, I suspect, is that Guerrieri et al. -- whose model was almost exactly the way I would have done it, so this isn't a criticism -- don't include a role for investment. The fall in demand isn't just households postponing consumption until they can go to restaurants again; it's also a crash in construction of houses, commercial real estate and so on. Who wants to build an office park in a plague?

Q: That's a good point. But this does raise another question. During the Great Recession, you were -- rightfully, in my view -- a harsh critic of people who used bad macroeconomic models to try to explain that crisis as the result of natural shifts in technology or workers deciding not to work. This time around, how do we know which economists have good models? Leaving out investment can make a model give wrong results, but it's a fixable problem. What sort of theories and ideas should we absolutely shun?

A: In both the Great Recession and now there are two classes of ideas we can immediately classify as worthless.

First, anyone who is peddling known zombie ideas like the magical efficacy of tax cuts should be dismissed out of hand.

Second, anyone who is just rolling out their usual ideas without making allowance for the special nature of the situation shouldn't be taken seriously. Back in 2008-10 you had people talking about monetary and fiscal policy as if there weren't an issue with the zero lower bound. Now you have people -- as always, a lot on the right but some on the left -- talking as if this were a garden-variety recession, not a shutdown enforced by social distancing.

In other words, it's only worth listening to people making a real effort to grapple with the novelty of this crisis.

Given that, I actually don't think it's too hard to think through a lot of what's happening. Most of the economy still works the same way as usual, which is to say more or less Keynesian in the short run. We can understand a lot of the unusual stuff just by applying usual behavior rules to an unusual situation: people may be unemployed with businesses losing sales to exotic causes, but their spending decisions will probably be like those of job losers in normal times. A lot of what's going on in financial markets reflects the same kinds of balance-sheet spillovers we saw in 2008-9.

The hard part is quantifying cross-cutting stuff. How important are supply-chain disruptions relative to excess capacity in driving inflation? What are we missing about things driving spending? (Investment-free consumer-only models can be a very useful strategic simplification - hey, I did that to think about the liquidity trap - but they may miss a key factor right now).

But the truth is that among economists who are making good-faith efforts to respond to unusual times, as opposed to saying what they always say, I'm actually seeing a lot of common ground. I don't see battling orthodoxies this time around.

Q: That's good to hear. One final question: How long can we expect the economic fallout from this shock to last? The Spanish Flu, which also led to a lot of social distancing, didn't seem to leave a lasting economic scar on the nation. But the modern economy is very different -- more dependent on delicate supply chains, more reliant on webs of debt and credit, more weighted toward services rather than manufacturing and agriculture. How likely is this to turn into a lost decade? And what policy mistakes might we make that prolong the pain?

A: I've been trying to get a handle on this by looking at recessions over the past 40 years. Until now we've had two kinds: 1979-82-type slumps basically caused by tight money and the 2007-09 type caused by private-sector overreach. The first kind was followed by V-shaped "morning in America" recoveries; the second by sluggish recoveries that took a long time to restore full employment.

My take is that the covid slump is more like 1979-82 than 2007-09: it wasn't caused by imbalances that will take years to correct. So that would suggest fast recovery once the virus is contained. But some big caveats.

One is that we don't know how long the pandemic will last. Right now, we're probably opening too soon, which will actually extend the period of economic weakness.

Another is that even if we didn't have big imbalances before, the slump may be creating them now. Think of business closures, which will require time to reverse.

And I also wonder how much long-term change we'll experience as a result of the virus. If we have a permanent shift to more telecommuting and less in-person retail, then we'll have to shift workers to new sectors, which will take time. That was an argument lots of people made, wrongly, in 2009, but it could be true now.

All that said, right now I don't see the case for a multiyear depression. People expecting this slump to look like the last one seem to me to be fighting the last war.