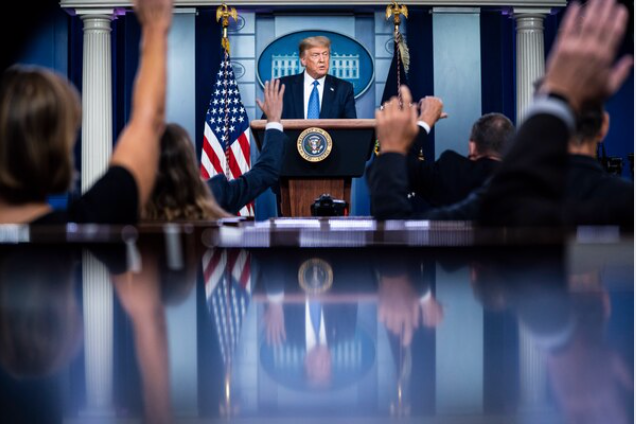 President Trump speaks during a coronavirus briefing at the White House on Wednesday. MUST CREDIT: Washington Post photo by Jabin Botsford.

How did the news media mess up in the 100 days leading up to the 2016 presidential election? Let me count the ways.

Journalists relied too much on what opinion polls were saying and often presented a skewed interpretation of their meaning. That fed the sense that Hillary Clinton would be the inevitable winner.

They vastly overplayed the Clinton email story, particularly the "reopened investigation" aspect in October. Given Donald Trump's background and behavior, the emphasis was astonishingly out of whack with reality.

News organizations failed to understand the tear-it-all-down mood of large segments of the voting public, or the racism and sexism that often fueled it.

They let Trump, the great distractor, hijack news coverage and play assignment editor. He became the shiny new toy that they couldn't take their eyes off.

They glossed over, or didn't understand, Facebook's monumental influence on the vote, and how what appeared on social media was so deeply affected by forces outside the United States.

They did things the same old way, when something quite different was demanded.

As a result, much of the mainstream press - and a good chunk of the public - was caught by surprise on election night 2016. The unthinkable - President Trump - had become a reality, with plenty of forewarning right under their noses.

Since then, there's been something of an effort - not nearly enough - to look back and learn from the mistakes. I've heard some newsroom leaders admit that their organizations didn't exactly have their finger on the pulse of heartland America. New York Times Executive Editor Dean Baquet said as much in a sweeping retrospective interview early this year with Michael Barbaro on "The Daily," the Times's signature podcast.

But, on balance, Baquet asserted that there was no need for journalistic self-flagellation. "We do have a tendency to beat ourselves up a little too much," Baquet said.

And so, here we are, roughly three months out from Tuesday, Nov. 3. Whatever the lost opportunities of the last cycle, there's one last chance to get it right - or at least closer to right.

Here are some ideas about how the media can use this crucial time to best serve the public good so that election night 2020 doesn't amount to another epic journalistic failure.

1. Focus on voting rights and election integrity. There's no more important subject than the strong possibility of intentional voter suppression or other Election Day chaos that's coming our way. Without a valid, publicly accepted vote, anything can happen. This should be front and center for journalists. There is no bigger story.

Many news organizations are putting reporting resources behind this. And I've seen some outstanding pieces, like one in Politico Magazine by historian and journalist Garrett Graff, "8 Big Reasons Election Day 2020 Could Be a Disaster."

The more of this the better. It won't solve the problem, but it will raise awareness.

2. Present the results of opinion polls with more context and explanation. One of the worst failures of the last cycle was the way Clinton was presented as the inevitable winner. Aggregations of polls that measured the probability of her winning at 80%, for example, didn't adequately explain what that meant, or emphasize that - even at 20% - Trump still had a decent chance of becoming president. It was unintentionally misleading and probably had the effect of depressing voter turnout. That kind of thing shouldn't happen again.

3. Stop falling for Trump's distractions. Despite there being little reason to hope that the White House press corps' years-long tendency to let Trump function as their assignment editor will change now, it should. As my colleague Jennifer Rubin noted this week after Trump publicly expressed his kind wishes for sex trafficker Jeffrey Epstein's alleged enabler, Ghislaine Maxwell, initial media reaction to this astonishing statement was muted. As Rubin put it, "There is something very peculiar when a White House press corps does not react upon hearing that, and when a fleet of mainstream media reporters and editors does not think it worthy of immediate emphasis."

Instead, much of the briefing coverage focused on Trump's change to a more somber tone. It was time for another round of "look, he's becoming presidential!" which was soon followed by Trump's predictable return to outrageous tweeting.

4. Don't participate in another "but her emails" situation. The latest iteration are charges that former vice president Joe Biden is approaching senility. Writing in The Post's opinion section, former Chicago mayor Rahm Emanuel compared this to what happened with Hillary Clinton. The media elevated the emails story because of a preexisting narrative that she was conniving and untrustworthy; it fit perfectly. Now that Trump's campaign is pushing the idea that Biden has lost his marbles, Emanuel begs for sanity: "Can we just please be reasonable about who's actually showing signs of strain?" It's Trump, after all, who suggested that bleach might cure covid-19 and posited the notion of dropping nuclear bombs on hurricanes.

Yes, do evaluate both candidates on their mental sharpness and ability to serve - something that's especially likely to come up in the Trump-Biden debates. But don't fall for an unfair campaign ploy.

Last time around, Facebook's role in spreading misinformation - and flat-out lies, like "the pope has endorsed Donald Trump" - may have been the biggest factor of all.

It's impossible to overestimate the impact these accounts have in spreading highly partisan messages to millions. But at least the traditional media can explore and explain what's happening.

In the full-blast fire hose of advertising, social media and more, the coverage provided by mainstream news organizations may not matter as much as it did in a previous era. But it will make some difference - just as traditional press coverage did in 2016.

And it would be awfully nice, this time, to get it right.

Margaret Sullivan is The Washington Post’s media columnist. Previously, she was the New York Times public editor, and the chief editor of the Buffalo News, her hometown paper.