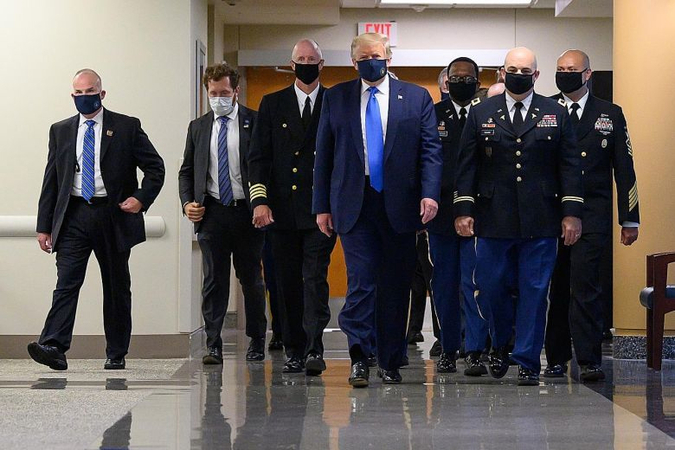 President Donald Trump visiting Walter Reed National Military Medical Centre in Bethesda, Maryland, on July 11, wearing a mask for the first time since the Covid-19 outbreak. Wearing a mask in the US has been described as a political issue, not a medical necessity.PHOTO: NYT

By Andrew Sheng for ANN
The Star

IN his 2016 Inaugural Address, United States President Donald Trump said: “For too many of our citizens, a different reality exists: Mothers and children trapped in poverty in our inner cities; rusted-out factories scattered like tombstones across the landscape of our nation; an education system, flush with cash, but which leaves our young and beautiful students deprived of knowledge; and the crime and gangs and drugs that have stolen too many lives and robbed our country of so much unrealised potential. This American carnage stops right here and stops right now.”

To stop the carnage, Trump cut taxes and started the trade war with China.

With just over four months to the November 2020 elections, the trade war has escalated to a fever pitch, thus described by the Chinese Foreign Minister Wang Yi: “It seems as if every Chinese investment is politically driven, every Chinese student is a spy and every cooperation initiative is a scheme with a hidden agenda.”

How could the strongest nation in the world with the best technology, medical and managerial skills have bungled the pandemic such that it could incur an estimated 225,000 deaths by Nov 1?

The Institute for Health Metrics and Evaluation model forecasts the range could vary from a lower level of 200,000 if 95% of the population wear masks, versus nearly 300,000 if mandates are eased (early re-opening).

A range of 200,000 to 300,000 deaths is a carnage by any definition. Recall that the 2001 war on terror was triggered by only 2,977 deaths from 9/11. Nineteen hijackers sparked America’s entanglement in the Middle East that cost US$7tril (RM29.8tril), not counting countless human suffering in Iraq, Afghanistan, Syria, Yemen and other countries.

This pandemic has larger human costs at home and will be emotionally traumatic, which is why insecurity and fear has made everything politically charged, not medical and science-based.

This explains why wearing a mask in the United States is a political issue, not a medical necessity.

The medical consequences of young people mixing freely without wearing masks after Memorial Day as if they are immune to Covid-19 are now evident, with crowded hospitals and further lockdowns, delaying any economic recovery.

With the largest economy losing control of her health pandemic, a global tragedy is unfolding, with a longer economic depression, rising unemployment, declining trade and less and less monetary and fiscal space for combating the multiple crises.

Realistically, rational solutions and policies cannot work when everyone is blinded by the growing emotional trauma from the pandemic.

There is no rational solution when both sides are polarised by deep emotion on a wide range of cultural and political values.

The once-in-a-century pandemic has woken us to the primal fear that survival is precarious. The response is emotional, not rational.

First, the pandemic and recession is a global problem that cannot be solved by any single nation.

No global consensus can be achieved when US-China tensions are at their worst for years.

In every nation, there is huge polarisation on many domestic issues except blaming outsiders and foreigners.

For years, the combination of technology and a push for global supply chains has cut middle-class jobs in rich countries. Instead of addressing their concerns, the standard policy solution was to cut taxes for the rich and increase welfare for the under-privileged. So the middle class feels that they pay most of the taxes, get none of the benefits and less and less security on jobs. Little wonder the demand for populist change.

Third, whilst technology and better management/governance using Big Data and Artificial Intelligence is the right way forward, technology has worsened the social divide because of winner-take-all effects.

The West cannot allow Huawei to win on 5G, because they would lose both the products, business and jobs from the 5G spin-offs.

All these point to dominant Big Government and Big Tech in the Post-Covid world.

Who and how to manage Big Government and Big Tech to deliver better health, good jobs, balance with nature, and world peace is the core concern.

But polarisation of views along race, religion, culture, class and generation means that the struggle is becoming more strident and emotional, bordering on violence.

The options for managing the complex and chaotic world actually are to fight, cooperate or take flight.

Flight is getting more difficult in a crowded world where the rich economies are closing their borders.The real worry is that governments will want to use the fear and fight factor to escalate the arms race, bringing us all closer to nuclear Armageddon.

Global cooperation is the rational option, but cannot be achieved with the huge emotional attacks on everyone who has a different view, inviting retaliation and further escalation of tensions. In other words, rational or scientific views cannot prevail when everyone is emotionally traumatised.

This is why American carnage is a real global tragedy. National security is taking precedence over economic logic. When the leading economy and military power is feeling vulnerable and insecure, there can be no global peace.

Those outside the United States know that in the run-up to the November presidential elections, emotions will continue to run high everywhere. British poet Rudyard Kipling (1865-1936) summed it up: “If you can keep your head when all about you are losing theirs and blaming it on you... And so hold on when there is nothing in you Except the Will which says to them: “Hold On”.

In these times, holding on is also a victory. We need cool heads and warm hearts to hold on, not hot heads and burning lungs. – ANN

The writer comments on global issues from an Asian perspective for the Asia News Network (ANN), an alliance of 24 news media titles across the region. The Asian Editors Circle is a series of commentaries by editors and contributors of ANN.