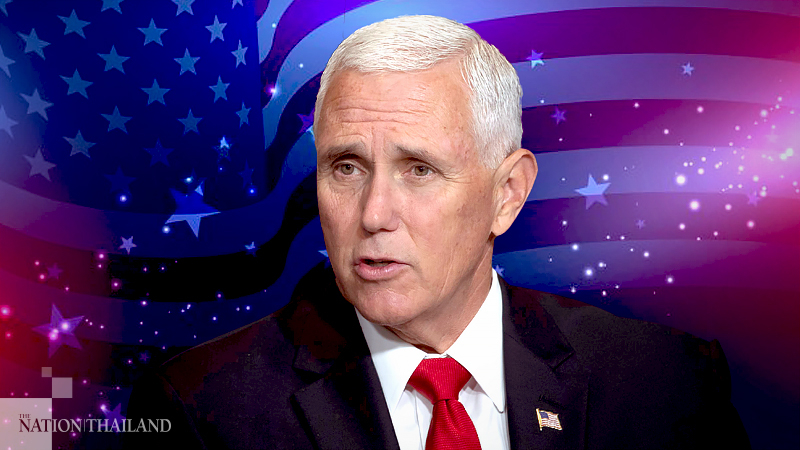 There they were. A team as always: Vice President Mike Pence and his wife, Karen. On the third night of the Republican National Convention, the couple walked out to the assembled audience at Fort McHenry in Baltimore holding hands. She took a seat and he stood framed by a red brick arch that was filled with American flags.

The vice president was spit-shined for the occasion. His dark suit fit well enough. His white shirt was crisp. His glossy red tie matched the stripes in the flags behind him, and his close-cropped white hair had the immovable perfection of an action figure's.

Pence is a mediocre speaker. He mostly spends his time uttering the name of President Donald Trump in sentence after sentence. Diagram one of them and it's likely: Noun, verb, adjective. Or more precisely: (begin italics) Trump. Is. Great. (end italics) He likes staccato - a lazy form of emphasis.

Pence's gestures are contained and precise. They're good for TV because they don't overwhelm the frame. He glances around at his live, mostly mask-free audience. He makes eye contact with the viewers at home.

Pence looks the part of a polished bureaucrat, which may be his greatest skill of all.

For much of his time in residence at the Naval Observatory, it wasn't unreasonable for the average citizen to wonder: What does Pence do besides lavish praise upon the golden head of his boss? He studiously steered away from making news. He hosted political donors. He delivered presidential missives around the world.

For nearly four years, the public-facing Pence just seemed to stand behind the president with his brow furrowed and his half-mast eyes - surrounded by starbursts of laugh lines - looking off into the middle distance as he basked in the white hot glow of the president's fury.

When Trump roars, Pence speaks in dulcet tones. If Trump doesn't speak on it - racism, the pandemic - Pence remains silent.

In this executive relationship, Trump is not just a very public alpha; he is everything.

This has not always been so. Vice President Richard B. Cheney forcefully made his presence known during the George W. Bush administration. When Joe Biden served alongside President Barack Obama, he was, among other things, a legislative wrangler and a partner who famously announced his opinion on marriage equality before the administration had announced its newly evolved position.

And Pence? Now, he is the head of the coronavirus task force. But before that, did Pence even have a portfolio, or was presidential adviser Jared Kushner's so overstuffed with negotiating Middle East peace, solving the opioid crisis, reinventing government and instituting criminal justice reform that there was nothing left for Pence to do?

Trump is the head of this office marriage and Pence regularly presents himself to the public as an old-fashioned helpmate. He strokes and massages his ego. He has surely made a greater effort to humanize this president than any member of his family.

The night before, the first lady talked about herself. The president's children echoed their father's grievances with his signature bluster and hyperbole. It was Pence who served up a platter of warmhearted anecdotes that were sorta-kinda about the boss.

In a pre-speech video, Pence stood against the backdrop of Abraham Lincoln's boyhood home in Indiana. (Surely every segment of this convention was vetted by producers to ensure it had at least one reference to Lincoln, because Lincoln freed enslaved Blacks and the Republicans are the party of Lincoln. So please, Black people, vote Republican.) A soundtrack of orchestral strings soared. And Pence was practically swooning over his beloved leader. "On every single day, without fail, President Donald Trump has been fighting for you," Pence said. And then he went on to explain that he'd be talking to a few Americans who have benefited from Trump's generosity. There was Jack, who received the gift of school choice. A Honduran immigrant and entrepreneur who qualified for the Paycheck Protection Program. And a groundbreaking Black judge who just wants everyone to get along.

On Wednesday night, Pence's was the rare live speech in a program of taped ones. So much had happened in the country in the past 24 hours: Civil unrest in Kenosha, Wis., had erupted into vigilante violence, and NBA players had halted play in protest over a police shooting. Hurricane Laura had developed into a storm of catastrophic proportions. It fell to Pence to connect the evening to all that had occurred.

He opened his speech with three brisk pronouncements of Trump's greatness and then paused to encourage those who were in Laura's path to "stay safe." Then he hustled back to Trump's extraordinary leadership and vision and ability to endure the media's attacks. He summed up the president's rhetoric, which can be full of race-baiting and callousness, with: "He's certainly kept things interesting."

And then Pence wanted to "be clear," about several points, which is a political heads-up for I'm-preparing-to-be-as-oblique-as-possible. He voiced his support of law enforcement and offered condolences to the family of an officer killed in the line of duty. He warned: "You won't be safe in Joe Biden's America."

He said he supported minority communities. Then he suggested that systemic racism doesn't exist. And he did not mention the many Black men and women killed by police officers. Or the recent shootings during the protests in Kenosha.

What exactly does Pence do? Not very much at all.