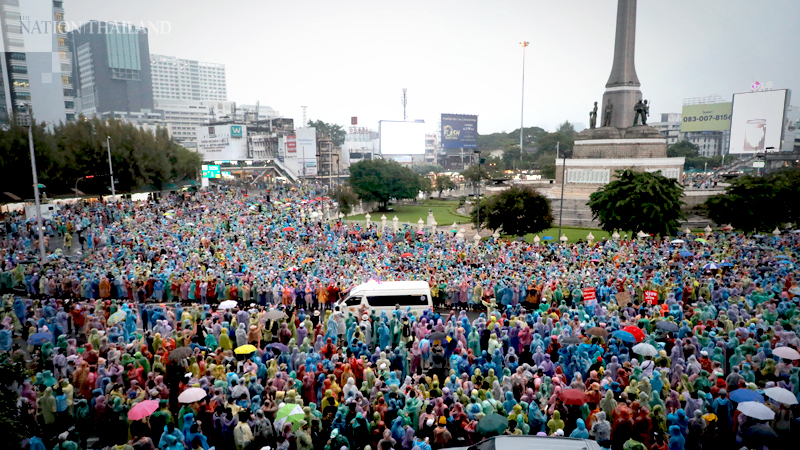 An ambulance makes its way through a huge crowd of demonstrators gathered at Victory Monument on Sunday. Korbphuk Phromrekha#NationPhoto

By Opinion: The Nation Editorial

The confrontation between government and pro-democracy protesters over the past few months has been aggravating.

The government imposed a  "severe state of emergency" in Bangkok on Thursday morning to disperse protesters outside Government House, and on Friday evening police used water cannons to clear demonstrators gathered in large numbers, mostly school children and youth, at Bangkok's Pathumwan intersection.

The government's action of arresting many pro-democracy leaders has escalated the protests across the country over the weekend.

Anti-government protests are snowballing and PM Prayut Chan-o-cha's administration has come under fire locally and among the international community for its harsh action against peaceful protesters.

Not only civil groups, but even the Buddhist monk community has expressed concern about Friday’s event. The Students’ Council of Mahachulalongkornrajavidyalaya University, a monk educational institution, issued a statement on October 16 strongly opposing the authority's use of violence against youth, students and people. The youth monks'  statement also referred to how Buddhism had emerged during a period when humans were oppressed, browbeaten by the caste system, human rights were violated, causing inequality in society and  social disparity, especially the caste system as practised in India at that time.

The statement pointed out that the Buddha had used the principle of peaceful resistance to oppose the caste system just as the Thai youth, students, and people tried to use peaceful means to seek change.

The international community,  including the UN High Commissioner for Human Rights, expressed concern at  Thai authorities slapping  serious charges, including sedition, against individuals for peacefully exercising their fundamental rights.

Some people might argue that the international community should not interfere in Thai domestic affairs, but in this instance we see a commonality of opinion among local civil groups as well as international organisations.

PM Prayut often tells people to embrace Buddhist wisdom in order to live their lives happily, just as he told protesters to pray in temples instead of protesting on the streets when he gave a press conference on Friday,  after his Cabinet had approved a state of emergency he had declared the previous day. On Thursday,  Arnon Nampa, a human rights lawyer and other protest leaders who had led a large number of demonstrators to camp outside Government House from Wednesday evening to Thursday morning, were arrested.

After the state of emergency was imposed in Bangkok, police aggressively pursued the arrest of protesters. Many of them are still in custody, facing severe charges.

The action is more or less like throwing oil into fire, antagonising people and prompting more protesters to join the demonstrations on Saturday and Sunday.  The confrontation has been intensifying with no sign of compromise from the government side.