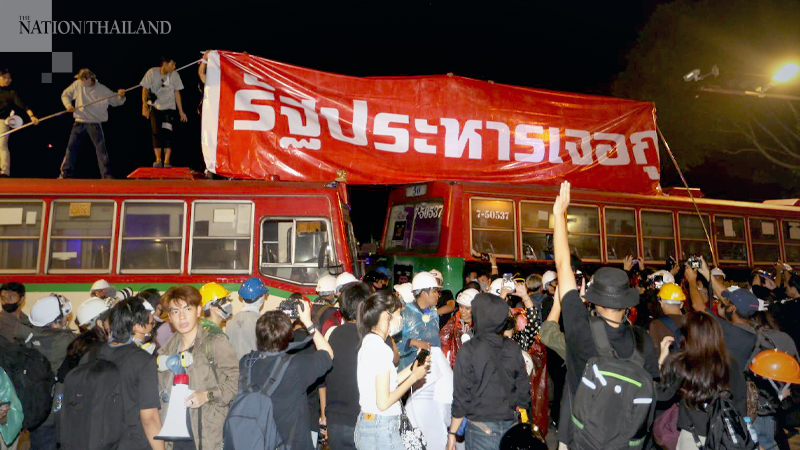 Protesters gather on October 21 in Bangkok. A red banner reads: Coup will be met with our defiance.

By The Nation
The Nation Editorial

The current political unrest has proved the failure of the 2014 military coup to bring about long-lasting stability.

The military at the time had pledged national reform but it did not live up to its promise. A military-sponsored Constitution and related laws enforced over the past six years have been the major causes of the pro-democracy protests across the country and by overseas Thais.

Many of those who used to support the military-backed government have now joined the youth-led pro-democracy movement.

One of the key demands of the protesters is a reform of the monarchy. The unprecedented call foreshadows a fundamental change in the existing legal and political system as well as how economic policy should be framed and implemented.

The pro-democracy protesters are trying to strengthen the rule of law, which has arguably been substantially weakened by the 2017  military-sponsored Constitution, especially related to Palace affairs. Changes in the  highest law and other related laws such as Crown Property Bureau’s management allowing HM the King to take direct control, raised questions of transparency and pointed to a disproportionate expansion of the monarch's power.  The Defence Ministry transferred two military units in Bangkok to be under the supervision of the Palace, which again raised questions about propriety. With massive numbers of the country's population  struggling with the Covid-19-induced economic crisis, protesters asked for more transparency in the annual budget allocation for the Palace. Due to the severe punishment imposed by the lese majeste law, the public have long restrained from openly criticising annual budget allocations for royal projects or Palace affairs, raising questions of transparency in taxation and expenditure management of the Palace

The protesters' demand to reform the monarchy has been widely supported by democracy supporters nationwide, ranging from school children to senior population.

Some ultra-royalists, however, have interpreted their demand as a move to overthrow the monarchy. Pro-democracy protesters deny such motives and have made it clear that they only want to reform the highest institution.

The government has used legal means to suppress protester voices, but has not offered a reasonable counter-argument for why the monarchy should not be reformed.

The government instead has in recent days mobilised its supporters in the form of royalists, aiming to counter the democracy movement.

Under high pressure from protesters, civic groups and the international community, the government lifted the state of emergency imposed earlier in Bangkok and agreed to hold an extraordinary parliamentary session. While critics are sceptical about the potential of the parliamentary debate to achieve any breakthrough, because appointed-senators and ruling party MPs have sent a message that there will be no change to the Constitution provisions related to the monarchy's role.

Against this backdrop, a business leader -- Banyong Pongpanich -- has proposed using provisions in previous charters to deal with the call for reform of the monarchy and to preserve the monarchy institution. It is rare for Thai business leaders to stick their necks out on sensitive issues.

As we have witnessed,  royalists mostly are aged people, trying to resist the call for change. They must accept the fact that society is dynamic and the new generation do not think like how they did.

At a time when Thais just celebrated Chulalongkorn Day on October 23, we should be reminded that King Chulalongkorn the great  ended slavery and prostration. That was one of the greatest reforms in Thai history.

Mobilising royalists to counter the pro-democracy movement in present times risks pushing the country into a cauldron, or worse a tragedy. The best way to save the monarchy institution is to undertake reforms in keeping with the demand of the times. Reform will greatly benefit all stakeholders in the country and will potentially ensure harmony.