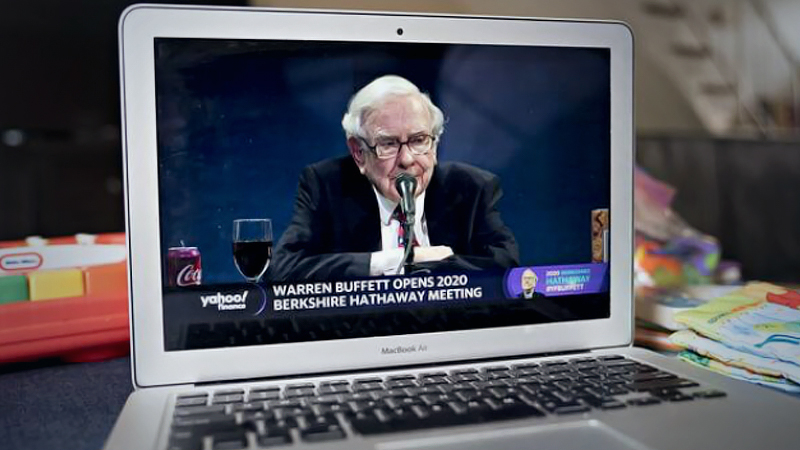 Warren Buffett, chairman and chief executive officer of Berkshire Hathaway, is seen on a laptop computer speaking during the virtual Berkshire Hathaway annual shareholders meeting on May 2, 2020. MUST CREDIT: Bloomberg photo by Andrew Harrer.

Warren Buffett has always taken the stance that regardless of who is president or which party holds power, each generation of Americans will be better off than the one that came before it - even if dark moments test our ability to believe it so.

But that's not to say the outcome of this election doesn't matter. It's pivotal for wealthy people like the 90-year-old Buffett, the future profits of Berkshire Hathaway and the lives of the 392,000 workers his conglomerate employs. Taxes, health care, energy policy and Covid-19 are just some of the big issues on the table and Berkshire - with interests in a range of industries - is a good proxy to gauge the impact any changes may have on businesses as a whole. Berkshire also shows how none of those other issues can be tackled without first reducing the threat of the coronavirus - because when it spreads, everything stops.

On Saturday, Berkshire is set to report third-quarter results. The easing of lockdowns during the period likely made for an improvement from the June quarter, when operating profit slid 10% and Berkshire took a $10 billion impairment charge on Precision Castparts, an aerospace-parts manufacturing subsidiary. Still, the latest results will show at a high level that covid remains the No. 1 challenge across Berkshire's smorgasbord of businesses - whether it be the BNSF railroad that transports goods and materials, the various Berkshire-owned retailers suffering from a traffic slowdown, or the restaurant-equipment maker Marmon feeling the knock-on effects of an industry under stress. If there's a silver lining to a year spent at home, though, it's that auto-insurance claims at Berkshire's Geico division are down because of fewer accidents.

Joe Biden promises more aggressive measures to stem the spread of covid, including a national mask mandate, which is a trade-off businesses would take if it meant staying open. But he also promises higher taxes: for corporations like Berkshire, but also for top earners like Buffett. For his part, Buffett doesn't begrudge paying more. The billionaire has lamented for years that his office staff have paid a higher tax rate than he has. At a Berkshire shareholder meeting eight years ago, Buffett highlighted some eye-opening findings: He said that in 1992, the top 400 incomes in the U.S. averaged out to $45 million, and of those only 16 were taxed at or below the roughly 15% standard rate. Fast forward less than two decades and the average top 400 incomes had swelled to an astounding $270 million; of those, 131 were paying less than 15%. He went on:

"When we're asking for shared sacrifice from the American public, when we're telling people that were formerly given promises on Social Security and Medicare and various things, and we're telling them we're sorry but we kind of overpromised and have to cut back a little, I would at least make sure that people with these huge incomes get taxed at a rate that is commensurate with what they used to be taxed at not that long ago. The tax law has gotten moved over the years in a way to favor people who make huge amounts of money."

Buffett's concern about the lopsidedness of the nation's tax system led former President Barack Obama to introduce the "Buffett Rule," which proposed a minimum 30% tax for anyone earning at least $1 million a year. Republicans blocked the effort, and Trump later went on to instead implement a tax cut that was skewed toward the rich. For his part, Biden says he will raise taxes on households making $400,000 a year or more, which isn't quite what Buffett had in mind. Buffett is also a proponent of expanding the earned income tax credit rather than raising the minimum wage, as Biden has campaigned on. Buffett says a higher minimum wage can backfire and reduce jobs, but "Expand the EITC" doesn't have the same ring to it.

Buffett may not have been all that consumed with the machinations of the presidential race, but the pandemic clearly shook him, and government's mishandling of the virus has cost him. When Buffett said at the virtual shareholder meeting in May that he believes "nothing can stop America," it was the first time he wasn't convincing - partly because his words were mismatched by a somber tone, and partly because a virus had very literally stopped America. The economy is better now than it was then, but Berkshire's earnings will likely show that there's a long road back to normal.