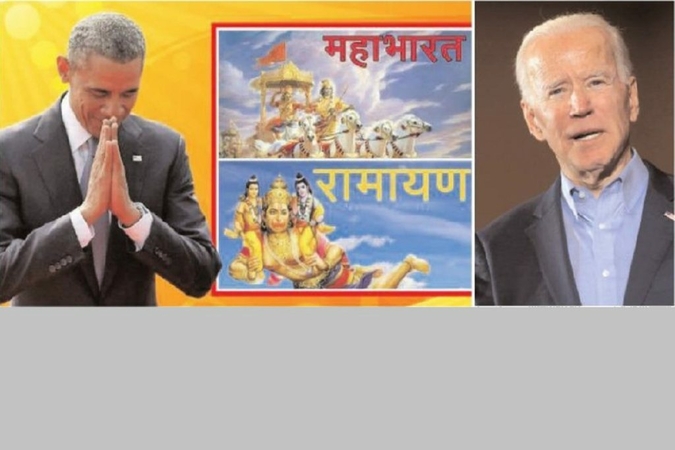 Every reader ought to notice that Barack Obama has gone out of his way in his biography to say how much of his childhood years he spent listening to the episodes in the Ramayana and Mahabharata. This of course, implies his appetite for spiritualism as well as his interest.

There are deeper messages in former American President Barack Obama’s autobiography than would come across in a casual reading. The name of his book, A Promised Land, although smacking of Abrahamic origins, actually implies that for the lesser well-off folk, the United States is yet to fulfil its promise. There is no doubt that Indian culture has charmed Obama for the Ramayana and the Mahabharata to have found noticeable space in his life story, which is significant.

That he was influenced by India was evidenced in his first visit to New Delhi, when he addressed the political elite in the Central Hall of Parliament. His speech was predominantly all about ancient India; the path-breaking achievements, various inventions and some of the human traditions set then. Initially, I wondered why Obama was telling India to Indians, but as his speech progressed, it occurred to me that Obama was telling the Indian political elite how well he knows their country, arguably, a shade better than most from India’s political class.

Presumably, as a sensitive and thinking mind, he was missing spirituality whether in his brush with Islam through his father or his practice of Christianity. Evidently, Obama had understood Gandhi and grasped his most original innovation, namely the satyagraha. President Obama’s rueful concern for India’s future, especially because of our communal divide, in my opinion should be a cause of worry to us Indians, due to its intractability for centuries.

Gandhi tried his hand at solving this problem but failed, and gave us Partition as his dying present. His favourite bhajan “Ishwar Allah Tero Naam” left Muslims cold, for in their eyes, no one can be higher than or even equal to Allah, the Merciful. Jawaharlal Nehru also opened his laboratory at Aligarh University in 1948, by telling its students: “Both our communities share a common history, similar traditions and face an identical future”.

He was speaking straight from the shoulder but met only a cool reaction from the audience. Thereafter, Nehru served the community what they wanted, namely identity. He became the most trusted leader in India as far as the Muslims were concerned. This Nehruvian laboratory functioned with vigour until 2014 until the advent of Narendra Modi, who has inaugurated a new experimental station and whose motto is integration. In other words, you and I must come together on the same terms. In the recently concluded US Presidential elections ~ even as the jury is still out ~ Barack Obama did campaign, more as a senior than anyone else for Joe Biden and Kamala Harris.

This gives me the feeling that the super rudder of the Biden administration could be subtly handled by him. Obama proved by the visit of the US Marines to Abbottabad that Osama bin Laden and his Al Qaeda were a menace to the rest of the world. He would now fully realize that President Xi Jinping is an even bigger menace. Xi’s misadventures could well result in a military clash. In such an eventually, India would be better placed to take the field with America providing as much wherewithal as necessary, thus saving itself the pain of body bags.

In any case, Obama’s experience and insights would guide a Biden administration and tell it that Asia rather than Europe is the central theatre of world politics. One mustn’t forget that it was under Obama that the US policy of a ‘pivot’ to Asia, i.e., refocusing on the Asia-Pacific theatre, began. India has plenty of trained soldiers, sailors and airmen, but in an extended war, could well need advanced weapons and equipment. The US and India are therefore ideal partners.

Neither Joe Biden nor Kamala Harris may be familiar with the complications of Afghanistan or the sea change in Pakistan that has taken place over the last decade – from an American ally to a running dog of China. To the extent that for the sake of foreign money, Islamabad has had to give up some of its rights over its own territory to its Chinese masters. This is a situation more pathetic than a defeat. A quick refresher of subcontinental history of the last century should provide a clear clue as to why Kashmir belongs to India and not to Pakistan.

A majority or otherwise of a province supporting Islamabad in this cause, in the context of India despite Partition having as many Muslim citizens as Pakistan, would be a wild goose chase. Every reader ought to notice that Barack Obama has gone out of his way in his biography to say how much of his childhood years he spent listening to the episodes in the Ramayana and Mahabharata.

This of course, implies his appetite for spiritualism as well as his interest in India. This is further evidenced by what he says about Gandhi, his interest in Eastern religions, etc., not to forget the compliments he gives to Dr. Manmohan Singh. The Pakistan story has nothing comparable to offer. All this of course, would soon be noted by the Biden-Harris team. They may or may not remember that President Obama had visited India twice and had been the honoured guest to be present throughout the Republic Day parade at Rajpath. In comparison, Obama hardly looked at Pakistan.

There is of course, that crowd of eternal hopers, particularly so in the charmed circle of Lutyens who might be salivating at the prospects of a Biden presidency in the fond hope that it would be softer on Pakistan, and harsher on their nemesis Narendra Modi. But for these dreamers, what Barack Obama has stated in his autobiography would be a sobering realization.

Describing the events that firmed up his resolve to take out the world’s number one jihadi terrorist Osama bin Laden, Obama has revealed that he mulled over three options: taking the Pakistani establishment into confidence, which was a nonstarter, given the Pakistani army’s and ISI’s close ties to the Taliban and Al Qaeda terrorists, a fact Obama himself states, air strikes to obliterate the Laden hideout, or a commando raid on his compound without letting the Pakistanis know and thus openly violating Pakistan’s sovereignty.

In a way, Obama has already tied a chain around Biden’s legs by revealing that his then Vice-President was against an operation to eliminate Laden, in sum, saying that Biden has been somewhat sympathetic to various jihadi outfits like those which operate in Kashmir and Pakistan. Joe Biden therefore will have very limited choices; in effect, liberal hopes for a major American policy turnaround have been washed away even before a Biden administration moves into office ~ assuming that happens.

One can speculate as to the political significance of Obama’s disclosure of his fondness for India, Ramayana, Mahabharata and other things Hindu. India is now a pivotal power, not to neglect mention of being a major one as well. The USA cannot see a future without India and for that to materialize, Indian civilizational polarization and support to Biden is a must. In fact, this is so irrespective of who eventually sits in the White House. Let us not be surprised if the coming American dream will have to traverse via India. Needless to add, all this is the result of the efforts of one man over the last six years.

(The writer is an author, thinker and former Member of Parliament)