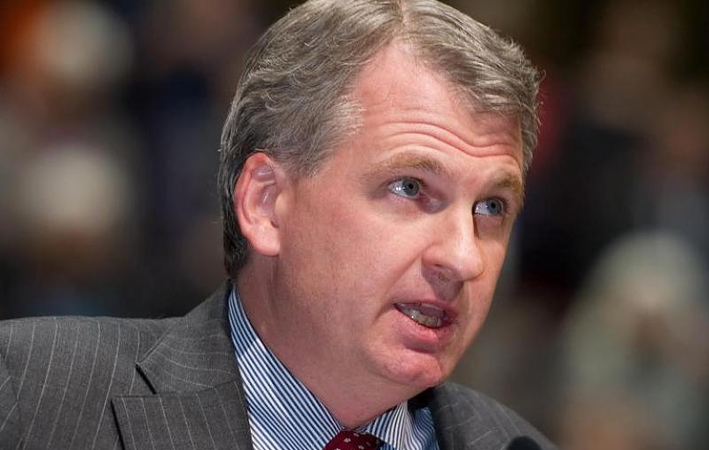 Timothy Snyder, the Levin Professor of History at Yale University.

By Special to The Washington Post · Timothy Snyder · OPINION, OP-ED

Twenty-first century authoritarians are against counting votes, but they legitimate themselves through elections. They don't seem to have any better ideas. Lacking the kind of powerful ideology that fascists and communists once had, they prove their power by faking the vote count and making everyone else go along. President Donald Trump has adopted this approach, and much of the national Republican Party is helping him.

Democracy has trouble with a certain kind of big lie, which is that the best way to give power to the people is to do away with the procedures that make that possible. Contemporary authoritarians have "pretend" voting, which they can never lose. Vladimir Lenin spoke of democratic centralism, the claim that a few men understood history and could direct it for the good of all. Josef Stalin installed governments called "people's democracies," the idea being that justice was served when the right people, but not all people, were served by single-party rule. Fascists pushed this thinking to the level of myth, claiming that a leader - "Führer" - mystically embodies the will of the people. These are ideas that have stirred the hearts of millions, people not so different from us, and not necessarily less wise.

It is easy to be tempted by the idea that representing the people means something grander than counting their votes. Americans are not immune to such temptation. Much of our history involves keeping most of our people away from the ballot box. That is the great challenge of democracy, one that is so often not met - to include others rather than claim that only people like ourselves are actually the people.

Trump, like Vladimir Putin and other contemporary authoritarians, most likely has simple reasons for wanting to stay in power. It's better to die in a comfortable bed than in prison or in exile. But to do so he needed people to claim that democracy would be saved only when votes were ignored, and a number of Republicans obliged.

Texas Attorney General Ken Paxton yielded to that old temptation Dec. 7, when he asked the Supreme Court to install Trump as president for a second term, under the rather feeble guise of a claim that Texas voters had been harmed by other states' practices. Like authoritarians around the world, Paxton maintained the pretense that he was defending the nation, though his actions aimed to disenfranchise millions of people. Paxton is known for many things, such as being subject to a federal investigation. He is not, however, known for protecting voters. Texas makes it hard to vote, and in some cases it uses digital voting procedures that are impossible to verify. This is not irony. This is not hypocrisy. It is the big lie: that we would somehow be a better democracy if "the people" just meant the right people, and not all people.

The big lie about the present, that Trump won the election, is known to be such by those who propagate it. The big lie challenges our dignity as citizens by portraying our actual votes as fraudulent. Rather than moving the country along, as voting should, the big lie forces us into a story of us and them, those who believe the story and those who do not, with no motion at all. Time stops at the founding moment of fake victimhood, which has to grow into a conspiracy theory that then takes up the space we need for politics and policy.

The big lie turns the aggressors into the victims. It takes away the past from which we might learn. Rather than accept that too many of us have made it too hard for too long for African Americans to vote, we are asked to believe that Black people unfairly dominate our political system by cheating. That is what Paxton's lawsuit came down to (Paragraph 98: the invention of the "phenomenon of Wayne County election workers running the same ballots through a tabulator multiple times," a fantasy that someone in Detroit counted the same ballot over and over).

The Supreme Court refused to hear this, but perhaps the real audience was elsewhere. Perhaps Paxton was just campaigning for a pardon from the president. Perhaps the Republican congressmen who filed an amicus brief supporting the suit are just wary of the president's influence. Perhaps they have not thought about what would happen if they won, what an America without elections would look like - how terribly we would treat one another, how low we would fall before our enemies, how foolish we would look to our children.

Or perhaps they have, and are tempted anyway. Motives don't matter to scoundrels, who will revise them later anyway. Democracy has trouble with those who traduce it in its own name, whatever their motives might be. Often, as in Germany in 1933, this is how the end looks: an imperfect constitution, a global shock, then an assemblage of cynics, sleepwalkers and vicious fools, working within the system, shouting that there is an emergency, perhaps not all of them entirely sure what they are doing but ready to accept whatever comes next, and treat it as normal.

One attempt will fail, but it creates a myth of victimhood, what the Nazis called a "stab in the back." This divides the population and discredits the system. And then, a bit later, another attempt succeeds.

Democracy means that our mistakes are temporary rather than permanent. Let's not make the permanent mistake of giving it up.

Snyder is the Levin Professor of History at Yale University and the author of "On Tyranny: Twenty Lessons from The Twentieth Century."