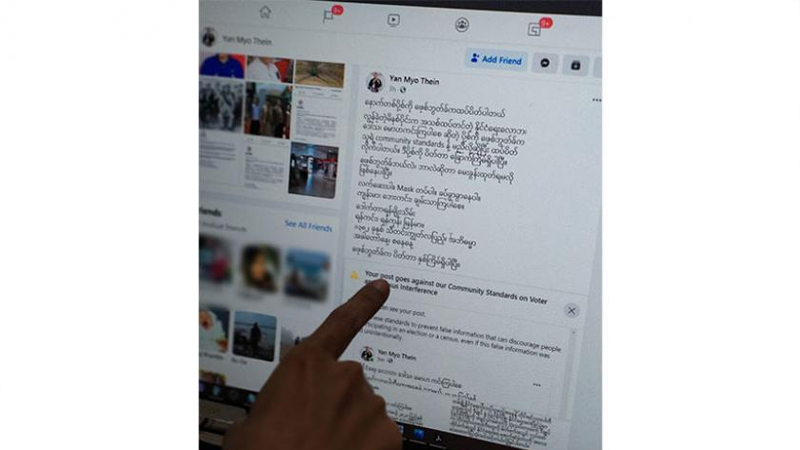 As the 2020 General Election nears, posts written by political observers and analysts are getting removed or blocked by Facebook.

Many such posts, with the absence of any swearing or defamatory language, are being removed through targeting by the social media platform.

"It is getting worse. People are asking me to complani to Facebook. I'm not going to do it," said a Myanmar political analyst Dr Yan Myo Thein.

Dr Yan Myo Thein is a veteran analyst and an author who has written political articles since the reign of the military junta in platforms such as True News, Flower News, Myanmar Post and many news journals. His body work consisted of many perspectives into the political hemisphere, particularly that of the formation of the 2008 constitution and is still continuing to put out political articles in both local and international media.

Ever since 2016-2017, he started noticing that his politics-related posts were getting removed from Facebook.

"It didn't used to happen. It became quite notable in 2016 and 2017. I have always been critical but no action like this. Lately, a lot of it gets taken down. Even if it is just an observation, it is getting blocked and punished," said Dr Yan Myo Thein.

Facebook removed his post on October 20 regarding the incident in which candidates from the National League for Democracy (NLD) that were captured by the Arakan Army (AA).

In that post, he shared his thoughts regarding the photos and statements regarding Rakhine NLD candidates captured by the AA. It was removed despite the post stressing the need to release captured candidates and encouraging discourse.

On October 31, Dr Yan Myo Thein wrote two posts concerning the Myanmar election. It only took minutes before it was taken down.

Those posts can be said to be critical of the ruling NLD as it concerns things that can happen to the NLD in the election, particularly in ethnic areas.

In the first one, Dr Yan Myo Thein pointed out that any predictions that claim that the NLD will see a bigger victory than the 2015 election is shallow and lofty, leading to negative consequences. If NLD leadership believes that to be so fully then it is rather detached from the true facts of the situation. It should be expected that as ethnic parties get stronger, the danger of losing many seats to them in the regional parliaments is a danger. It has to be expected that Tanintharyi, Ayeyawady, northern Sagaing and townships outside of Yangon's municipality will have to be carefully waged competition.

It was also removed as it went against 'Community Standards'. It was never able to go back up no matter when or how many times was tried.

But those that copy-pasted from his post never had their posts removed.

Facebook is putting restrictions on not only political analysts but also toward some political parties.

Ko Nay Yan Oo, a Pyithu Hluttaw candidate representing Kamaryut Township for the People's Pioneer Party (PPP), claims that online panel discussions that the PPP does weekly via Facebook Live gets taken down if there ever involved words that criticised the government.

Ko Nay Yan Oo was an IT professional and was also a regular writer regarding the Union government staff. His posts were also removed as it supposedly went against the rules.

"Initially, I just upload things that are part of my life and then, nothing was ever removed. Facebook started digging into me in 2019 when I criticized the union civil servants. I uncovered their mess. So then my post started getting targetted and removed," said Ko Nay Yan Oo.

He also claims to have faced more restrictions campaigning online after he announced his decision to be a part of the PPP.

"It is worse now, especially more so as I am an opposition politician. It happened before the election period and also during it."

"Number one is that I couldn't upload anything on my Campaign Page on the very first day of the election period. No texts, no pictures, no videos, nothing. And it isn't only the Campaign Page. There is another page that writes about the union government but Facebook had blocked it. So if it is the election campaign time and due to COVID-19, we cannot campaign on the ground so we have to do it online and the online option gets blocked then what do we do? The second thing is that we always hold a panel discussion online weekly every wednesday. We do it live with our voters. We faced this twice; everything was fine until we started criticizing the government. The alleged reason was that whatever we were talking about fringing copyright with BBC Burmese. So the excuse was that BBC reported us. In reality, the BBC did not report us. We have asked. And the other thing is we are talking live. We are not using any photos or texts or videos. We are speaking like we are speaking now on the phoe. There is no way that was getting copyrighted. It happened not the one time but twice. The last one, I think, many people have experienced. Things couldn't be boosted. I tried boosting my picture with a western suit on (as I don't have a lot of my photos in traditional clothing and it was COVID period so photo studios were closed) but I couldn't boost it. Apparently my picture was too sexual. How is it possible that I have a suit on with a necktie that I am being sexually suggestive?" said Ko Nay Yan Oo.

Someone cleared to reply to The Daily Eleven had said that Facebook is working on blocking content that will use the political, religious and racial situation to incite hate.

The Daily Eleven had asked Facebook, in the middle of October, over the email regarding the removal of content from political analysts and how exactly were they qualified to be removed as those posts do not contain any words that may incite hate or utilized inflammatory language.

Facebook sent a reply that until November 22, they will be removing any content that can mislead and obstruct voters with misinformation or unverifiable rumors or anything that can harm the election process will all be removed.

"We have a clear set of rules on action against inciting hate and violence. If those rules were broken in Myanmar or anywhere else, it will be removed. On top of removing any potentially dangerous content, Facebook had also introduced technological products to lower the amount of incidents of inciting violence and hatred before and after the election period," replied Facebook.

It also said that attacks under the religious or racial guise are being removed such as calling groups like migrants or the Bengali that are without citizenship rights "trespassers" or "illegal immigrants" or any other word that comes close to its meaning.

Facebook had also announced the expansion of their bullying and harrasment policies to include journalists, activisists, humanitarians and other distinguished persons that always easily come under attack.

According to its announcement, Facebook removed around 300 thousand hate speech related content in the second quarter of 2020. It also cited utilizing AI that can recognize and remove content written in a total of 45 languages, including Burmese, with hate speech in them before anybody could see.

But lately, the removal of posts from political analysts and party candidates as well as campaigning by political parties are arguable in its capacity to be removed by Facebook due to infringing 'Community Standards'.

Even when the usage of inflmmatory language was involved with breaching community standards, users that exercise their right to colourful speech that are supporters of the ruling NLD do not see any action from Facebook while those that go against them will surely be removed or made not visible by Facebook.

Incidents of posts that get removed despite not containing any explicit language amount to censorship of the freedom of speech.

The (6/2017) meeting of the Union Government approved the formation of the Social Media Monitoring Team (SMMT) in order to keep tabs on social media platforms including Facebook. The President's Office formed the team on Februaruy 7, allowing them a budget of 6.462 billion Kyats from the special presidential reserve to purchase necessary technologies and equipment.

In a nation utilizing the democratic system, the rights of citizens in their freedom of thinking and speech is a basic commodity and Facebook's restrictions, despite not utilizing language that are inflammatory racially, class or otherwise, it certainly begs the question whether a deal was made with the current government between it and Facebook.

While the act of preventing and removing misinformation, fake news and manipulations is welcome at any time, election period or otherwise, the Facebook Team must be responsible for acting upon the taboo of censoring the people's freedom of speech.

Moreover, it harms the election ultimately as it restricts the mind of the voters from going through with enough mental exercises with thoughts and opinions derived from political parties campaigns as well as observations of the professionals.

"It makes sense if they were removing criticism based on fake news, hate speech or abusive language. But rethinking is necessary for acts of punishment because it was against their community standards, despite it being real news or me extrapolating and analyzing facts. If they are to go on this way, the reputation of a network that is working towards fariness and free from political bias can be damaged," said Dr Yan Myo Thein.