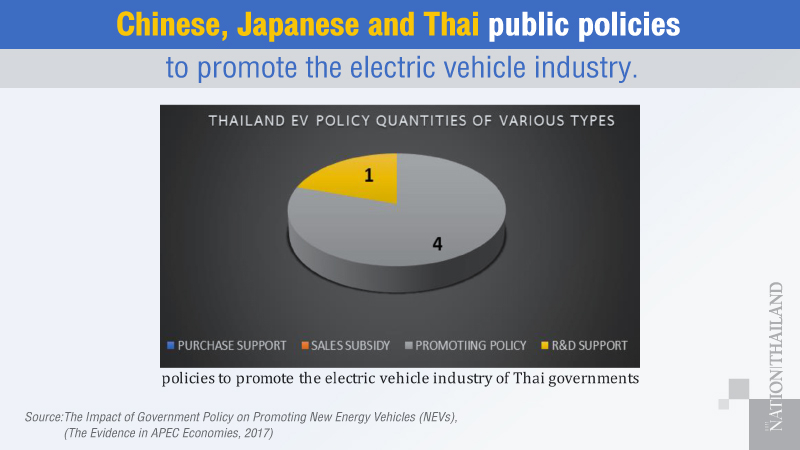 ​Governments around the world are aware of the environmental problems and challenges besieging the planet. This has led to the framing of public policy focusing on the balancing of economic, social, and environmental issues. 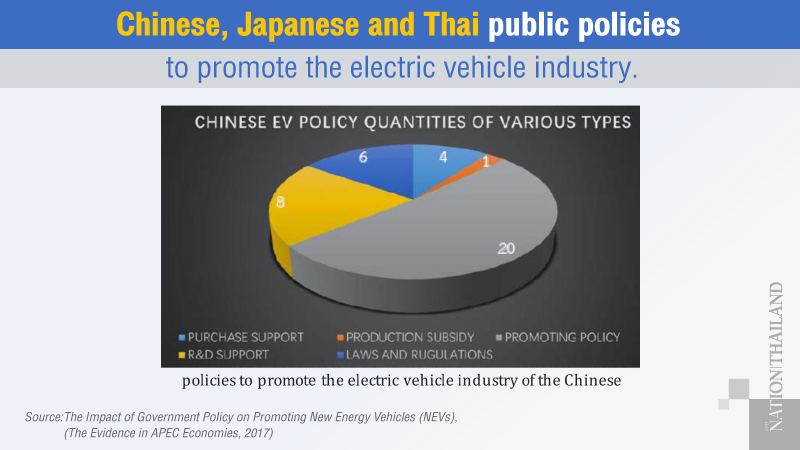 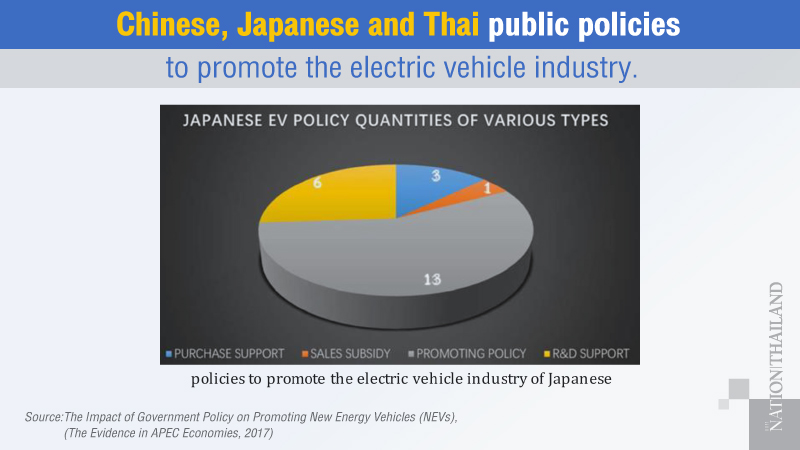 The trend in pushing economic development is increasingly based on innovation being applied to increase productivity and further improve people's quality of life. Reducing the amount of greenhouse gas emissions and PM2.5 (particles less than 2.5 micrometres in diameter) dust in the air are critical areas of emphasis in framing policies to promote the development of industry and the use of electric vehicles seriously until it becomes a national agenda.

​A 2017 Asia-Pacific Economic Cooperation (Apec) study illustrates the policy of supporting the manufacture and use of electric vehicles in the leading industrialised countries, including China and Japan. They have a comprehensive policy package covering five areas. They provide a 10-15 per cent subsidy to customers; offer tax incentives and manufacturing subsidies; offer research and development support for more than 20 years by funding automobile companies to develop batteries and electric startup companies, woo foreign direct investment or determine the proportion of governmental electric vehicles; and, issue laws and regulations limiting the number of fossil-fuel vehicles in big cities.

​Public policy in developed countries, including China and Japan, have supported and promoted the manufacture and use of electric vehicles seriously, reflecting the determination of the governments to revolutionise the automotive industry and reduce dependence on fossil fuels, and facilitate environmental conservation.

The Chinese government has issued 39 policies for promotion and support of EVs, while Japan has 26, with the highest priority being on demand-side subsidies, followed by promoting technology research and development. Increased use of EVs and support for production have lowered the prices of electric cars. This is considered a complete stimulus covering both supply and demand.

A master's degree thesis by Vut Mahamongkol in 2020 from Chulalongkorn University's Faculty of Political Science, on Electric Vehicle Industrial Promotion Policy Formulation in Thailand has compiled the current policies to promote and support the production and use of electric vehicles by the Thai government. It found that there were only two areas of policies to support and promote EVs, namely the Promotion Policy, especially tax incentives to promote investments from foreign investors, totalling four policies, and for the promotion of research and development. Imposing the condition that foreign companies transfer advanced technology, such as the production of batteries that can charge quickly, would allow Thai entrepreneurs to develop their manufacturing capabilities from just assembly and fabrication.

​An overall evaluation shows the Thai government's policies are not comprehensive enough to cover all dimensions. As a result, the prices of electric cars in Thailand are quite high -- about Bt1 million or more. Currently, no foreign company has set up a manufacturing plant for electric cars. All the EVs are imported. The only operator in Thailand is Energy Absolute Pcl (EA). Recently, EA launched an electric vehicle under the Mine Mobility brand. The EV can drive continuously for 200 kilometres per charge, but the cost is still quite high due to lack of government support. If the Thai government explores opportunities in developing the EV industry, it will enhance industrial development as well as Thailand's economic competitiveness in the future. Therefore, it is necessary to come up with more comprehensive policies, by adding three policy areas -- the adoption of pollution control laws, promoting the manufacture, and the use of electric cars.

Proactive moves in this direction will be an important factor in creating an environment that will facilitate the manufacture of electric cars as the main vehicle in Thailand in future, and contribute to sustainable reduction of greenhouse gas emissions and PM 2.5 dust in the country as well.

​However to focus on the development of the EV industry, it must rely on occasion and timing since the government must consider the overall readiness of the stakeholders resulting from this important decision because fossil fuel vehicles will eventually be replaced by electric cars.

In 2019, Thailand ranked 11th in the world in the automobile industry (50 per cent of its production for domestic use and 50 per cent for exports). Amid the increasing use of electric cars, it began to wake up to the reality and come up with a significant response. If the Thai government lacks a clear and comprehensive policy to promote the production and use of electric vehicles, it will inevitably affect export income, which is a major engine of growth driving the Thai economy.

Chadin Rochananonda is a lecturer at the Faculty of Political Science, Chulalongkorn University, and