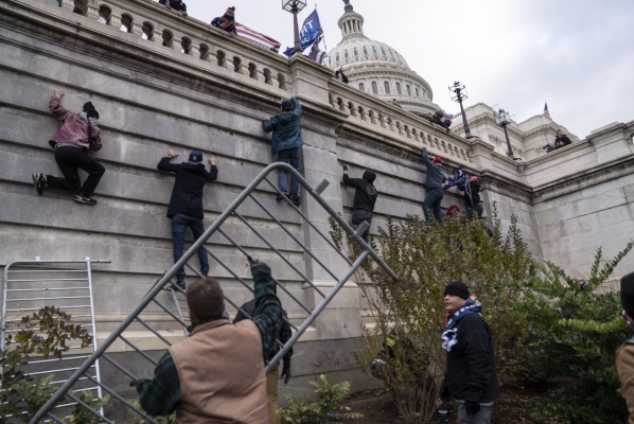 Trump supporters scale the walls on the Senate side of the Capitol on Wednesday, Jan. 6, 2021. MUST CREDIT: Washington Post photo by Michael Robinson Chavez

Amid the chaos and mayhem at our nation's Capitol, the flags flew high. Dangerous. Despicable. And familiar.

The day had begun with the results of Georgia's runoff election, in which Raphael Warnock was the projected winner and fellow Democrat Jon Ossoff declared victory. In the aftermath of his success, Warnock reflected on the hopeful history he had just made, as the first African American senator from Georgia. The country had come so far, a journey measured by the life of his 82-year-old mother, who had gone from picking cotton for the benefit of overseers to casting a vote for her son for the betterment of her country.

Ossoff, who had interned with the civil rights icon John Lewis, would make history, too. He would by nightfall be projected to become the state's first Jewish senator.

But our grievous history is relentless. And so is hate.

The rioters stormed the U.S. Capitol in hopes of holding on to a past - both near and distant. They hoisted Trump flags aloft because it is he to whom they've pledged their allegiance, refusing to accept his defeat in the November election. "USA!" "USA!" they cried. These violent and angry mobs of men and women called themselves patriots - despoiling a beautiful and mighty word - as they clamored up inauguration scaffolding, shattered windows and wreaked terror in the nation's capital in the name of a single wretched man and his delusions of greatness. They held signs that evangelized that "Jesus Saves," using religion to justify their attempted coup.

"Fight for Trump!" they chanted. And they let Confederate flags fly on the Capitol steps and inside its hallowed halls, making it plain just how they define the man and the real Americans for whom they claim to be standing firm.

For much of Wednesday afternoon, the president of the United States let the anger of the mob fester as flash bangs echoed off federal buildings and the stink of smoke filled the air. President Donald Trump had incited and encouraged this insurrection. It was his creation, and he put the final flourishes on it in the late morning when he - as well as his family - poured even more accelerant on an already raging fire during a morning rally on the Ellipse.

The Capitol siege was seemingly his end game, the culmination of his campaign of lies and grievances over an election that he lost fair and square.

"We're going to walk down to the Capitol, and we're going to cheer on our brave senators and congressmen and women, and we're probably not going to be cheering so much for some of them," Trump said from behind a protective clear shield as he was wrapping up his remarks.

"We're never going to take back our country with weakness. You have to show strength, and you have to be strong."

His followers did as they were told.

And so, on the sixth day of a new year that has already felt like a suffocating eternity, democracy bled out. It was bludgeoned and pummeled and stabbed through the heart by a mob of Americans who claimed they were fighting against communism, socialism, liberalism and a host of other -isms, when all along they were simply at war with democracy and the inconvenient truth that sometimes you and yours are simply outvoted.

What to call these people? To describe them as protesters is to undermine those who take to the streets in peace, who raise their voices in hopes of making the country better - not to demolish it. Are they traitors? Terrorists? Radicals? Thugs? They are all of those things - a national quilt of our worst impulses and characteristics. They are young and old. They are men. They are women.

They are mostly White. And they rampaged through the Capitol posting photographs of themselves and one another breaking into the offices of the speaker of the House, looting and rioting and threatening - and, at least initially, being greeted like overzealous tourists compared with the way in which some law enforcement have beaten back Black Lives Matter and racial justice demonstrators.

The president-elect made a statement, too. Joe Biden pleaded for peace and insisted that Trump speak up with certitude and passion and to send his supporters home. "This is not dissent," Biden said. "It's disorder. It's chaos. It borders on sedition. And it must end. Now."

He said the rioters did not represent who we are. But they are, at least in part, who we have become. They're certainly part of who we've always been. They are Americans just as surely as are those who watch them in horror and disgust.

Americans stormed the Capitol, and they did so while flying the Confederate flag. They did this. They brandished it throughout the marble halls. That is who they are. They are proud of it. And they are part of this body politic.

As democracy lay dying under the Capitol dome, Trump finally spoke to the assailants, in a video posted to Twitter. His call for the violence to cease was grudging and without any of the ruthless gusto that he reserves for agitators who don't look like him, who don't worship him, who don't serve his purposes.

"I know your pain. I know your hurt," Trump said, and then he repeated his lies about having won the election. "But you have to go home now. We have to have peace."

But what Trump has unleashed cannot so easily be controlled or pushed back. History is relentless. Hatred is fierce.

The rioters want to wallow in the Confederacy. They want to be reborn under the flag of Trump. They want to live in an angry, polluted, heartless world, if only because it means that they get to stand victorious atop the whole, miserable mess.

Robin Givhan is senior critic-at-large writing about politics, race and the arts. A 2006 Pulitzer Prize winner for criticism, Givhan has also worked at Newsweek/Daily Beast, Vogue magazine and the Detroit Free Press.