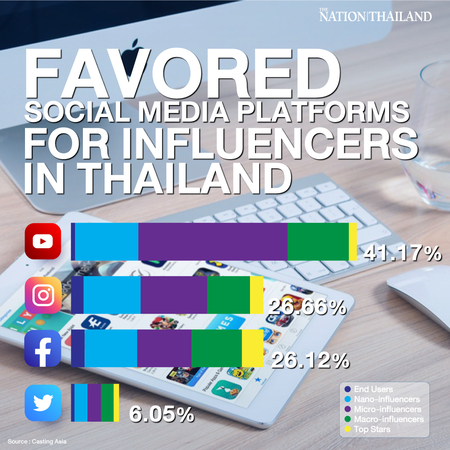 The century-long dominance of traditional media in Thailand – print, TV and radio – has been shattered by an upstart called the internet. The shift online has triggered an explosion in the number of news outlets plus a neck-snapping acceleration of the 24-hour news cycle.

To stay competitive, journalists and media organisations have been forced to adapt their working style and business strategy to suit the changing market and modern communication tools. The media scene is now dominated by online platforms, which have rapidly overtaken traditional channels like newspapers, radio and television as people’s go-to source for news and other media content. Meanwhile, information spreads unchecked across the world on social media, spawning fake news and “echo chambers” that divide societies.

As journalists fought to adapt to this new digital age, the Covid-19 pandemic arrived with fresh challenges to meet if they wanted to survive in the modern world. Revenue from advertisers dried up as the lockdown strangled the economy in Thailand and around the world.

Journalism professionals have responded by seeking new business models to secure additional sources of income, while at the same time boosting the quality of their content to make it stand out from the online crowd.

In the first report of a three-part series, The Nation Thailand explores media competition and survival in the post-pandemic era.

Thais are among the world’s biggest users of social media platforms such as Facebook, YouTube, Instagram and Twitter. These platforms are dominated by so-called “influencers” – individuals who can attract millions of followers, dwarfing the audiences for newspapers or TV channels.

YouTube is the preferred choice for most social media influencers in Thailand (41.1 per cent) to present their content, according to statistics from Casting Asia. Instagram and Facebook are neck-and-neck in second and third place (22.6 and 22.1 per cent), while Twitter comes fourth with 6.05 per cent of influencers.

Tik Tok, the latest social media arrival, reports that the number of influencers in Thailand using its platform has risen steadily since 2020.

The second and third report of this three-part series on media post-Covid-19 will follow soon.