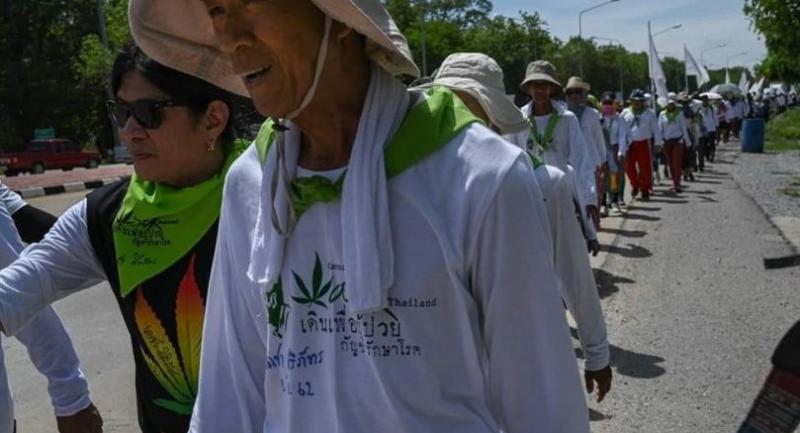 REPORT: Progress made on medical cannabis, but challenges are ahead: Cannabis Walk

Although Thailand is still lagging behind other countries in developing cannabis-based medication, Thai medical researchers hope frozen knowledge could be renewed and extended to serve patients’ needs, especially in the field of traditional medicine.

The latest progress on medical cannabis was shared with participants in a recent seminar organised as part of the 21-day “Cannabis Walk Thailand”, which wraps up this weekend.

The Walk, led by Decha Siriphat – a long-time advocate of sustainable agriculture and traditional medicine – is aimed at raising awareness about cannabis-based treatment and knowledge which has long been absent from people’s perception.

Marijuana was banned under the 1979 narcotics law for more than forty years, before the government decided early this year to loosen controls, allowing it to be used legally for medical purposes.

“It’s better late than never,” said Prof Dr Pattapong Kessomboon of Khon Kaen University’s Faculty of Medicine. “At least it allows us to renew the studies and extend our knowledge.”

Dr Pattapong said international community has been for a big while active in the field of medical cannabis studies, with at least 25,000 research papers having been found available. Bsed on his researcher team’s years-long review, these research papers could be classified into three main groups according to their reliability.

The first group of papers, Dr Pattong said, offers solid research results and information that can be applied in actual cases, such as easing nerve pain, treating epilepsy and the side effects of chemotherapy.

The second group details positive results like those on cases of Parkinson’s and Alzheimer’s disease, paranoia, multiple sclerosis, and easing pain in people with fourth-stage cancer.

The rest, he said, need further studies to be conducted as they mostly claim on the fact that marijuana can “cure” cancer and even kill cancer cells.

In Thailand, on a contrary, there have only been two studies conducted to date on the benefits of marijuana, both by Rangsit University’s Faculty of Pharmacy.

It was the faculty’s first dean, Prof Dr Surang Leelawat, who over 10 years ago studied the effect marijuana had on cholangiocarcinoma, a cancer affecting the bile duct, by using THC extracts on lab rats, said Prof Dr Thanapat Songsak, the present dean.

Prof Surang managed to determine that THC could help stop the disease from spreading. Her researcher team then found another chemical – CBN –to be helpful in containing the growth of cancer cells in the lungs.

Dr Thanapat said the faculty now was conducting tests on cholangiocarcinoma and expects confirming results in the next three months. They could then move on to tests on humans.

Rangsit, he said, remains the only Thai institute permitted to grow marijuana for research. Other universities were in the process of submitting requests.

“Marijuana may be seen by some as an evil, but in the view of our research team, it is valuable for patients’ quality of life,” he said. “So we think we’re on the right track and hopefully we will find light at the end of the tunnel.”

Thais have long used cannabis in traditional medicine. Dr Khwanchai Visithanon, director of the Thai Traditional Medicine Institute, said up to 200 cannabis-infused medicines have been found on record.

Dr Khwanchai said the institute began collecting books on the subject eight years ago at the recommendation of noted pharmacist Dr Yongsak Tantipidok, vice-president of the Traditional Medicine Federation of Thailand.

Screened for repetition, 90 distinctive formulae remained for further study. Khwanchai said his team has divided the list into three groups.

In the first are formulae with clear records of ingredients still available, along with directions for preparation. In the second are more complex formulae or with notes requiring further translation. In the last are recipes which are beyond modern knowledge to understand or contain hazardous or toxic ingredients or items that have been banned.

Dr Khwanchai said recipes that have clear records and evidence of use could be applied directly to World Health Organisation guidelines without the need for lab or clinical testing.

On a contrary, modern cannabinoid medicines would require at least 17 years’ for research, as well as an investment of up to Bt1 billion, and Decha’s would not be made possible for patients quickly if going through modern medical preparation.

“Labelling cannabinoid medicines as traditional would allow them to reach patients quicker,” Khwanchai said, citing Decha’s which is now also under his department’s consideration to be listed as a traditional medicine recipe.

So far, the department has listed 16 traditional formulae from those royal medical books that could now be legally produced.

Meanwhile, the Government Pharmaceutical Organisation is mass-producing the first in-house crop, which is expected to produce 2,500 doses of cannabinoid medicines.

The figure, however, is far below patients’ current needs.

Dr Yongsak, who has convinced the institute to manage a database of traditional medicines, said practitioners also pay attention to medical context and cultural background.

Traditionally, cancer was believed to derive from jao karma nai vera (curses from past lives) and could thus be cured by practising dharma while medicines were being applied, Yongsak said.

He believes this method of treating disease, abandoned with the introduction of Western medicine, should be revived and extended alongside the development of drugs.

His team is also studying Decha’s patients, who are similarly required to uphold the principles of dharma as an aid in their treatment.

No less challenging, the panellists agreed, was the long disruption of traditional knowledge about marijuana-based medicines, which resulted in many recipes being forgotten.

The revival and extension of that knowledge needs to be tackled alongside new obstacles stemming from conditional government controls.

Rosana Tositakul, a former senator and an adviser with the Foundation for Consumers, said complicated rules and regulations lead to suspicions of a “hidden agenda” by the state to serve certain groups’ interests.

It sows doubt when various limitations are imposed against medical pratitioners in general while the growing and medical production from the plant is much under state control.

The panellists expressed hope that the new government will tackle the issue as some political figures have promised to do so.

Last but not least, they said, it’s a social force and movement that could truely guide the so-called merciful medical treatment, under which cannabis is made for the public at large, not any one’s greed.