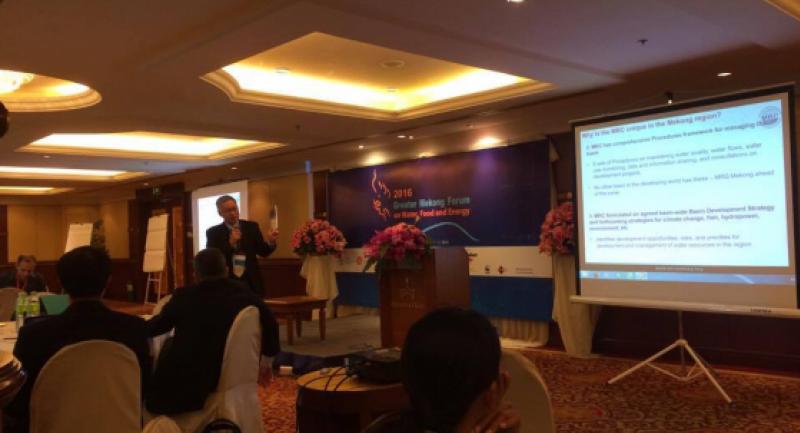 AS THE Mekong region faces intensifying challenges from developments needed by its riparian countries including Laos’ latest mega-project, the Pak Beng Dam, the Mekong River Commission (MRC) insists that it is still the best institutional arrangement to ensure sustainable development for the basin.

Pham Tuan Phan, who assumed the post of MRC chief executive this year, stressed that point while delivering his presentation about the organisation, empowered by the 1995 Mekong Agreement, at the Greater Mekong Forum last week, where leading river experts and policy-makers attended to find out the best approach to ensure the river’s sustainable development.

The governance of the river was once again debated at the forum. At one session on the MRC’s roles and the recommendations for its improvement attended by top experts and policy makers, Pham detailed what the MRC has been doing over the past 20 years in an attempt to convince people that there has been progress in the organisation’s efforts.

Besides the umbrella 1995 agreement, the MRC now has basin development strategies, which cover key activities from this year to 2020, and five principal procedures to guide the best practices in water use of the Mekong, including a highly controversial prior consultation process for notable development projects, including hydropower.

“The MRC is imperfect, but it’s indispensable,” concluded Phan at the session. Phan told The Nation that the MRC is the best regional arrangement in dealing with the increasing challenges in the basin, and this has something to do a lot with history.

Phan said the basin had a declaration in 1975 under which the riparian countries needed consensus voting to go with their projects, but it did not work. He said that would have been especially the case under the present circumstances where the countries prefer to find mutual opportunities for developments.

With more flexibility, the 1995 agreement has become the best deal and works well among the member countries although it is not as robust as its predecessor, he said. “It somewhat satisfies the needs of the countries with a spirit that the countries feel that they can honour. That’s why [it is the best deal],” Phan said.

Phan rejected the notion that the MRC is a regulatory body. It is an inter-governmental organisation which provides a platform for cooperation among its members. He called this “a platform for water diplomacy” which is in place to facilitate members.

As the body’s chief executive officer, Phan realised it still needs improvement. He said the organisation is working on the trans-boundary impact assessment, the monitoring and reviewing of projects and redesigns, and an extended duration for a review under a prior consultation process known as the Procedures for Notification, Prior Consultation and Agreement (PNPCA).

Other non-profit organisations promoting sustainable development along the river see shortcomings in the process. One of those organisations, International River, released its latest statement on the Pak Beng Dam and questioned the MRC and the prior consultation process, which it regards as being flawed and has no reform in sight.

International Rivers cited the experience from previous projects by Laos, Xayaburi and Don Sahong, which it said demonstrated major flaws in the process. The prior consultation process is the principal platform for discussions and agreements on the river’s development projects, but International Rivers said no agreement was reached by either the MRC’s joint committee or council for these two projects as the MRC itself also acknowledged.

The major flaws of the process are the lack of facilitation of necessary information to help understand impacts on neighbouring countries, and the lack of clear requirements for meaningful participation, affecting transparency, it noted.

“Indeed, by the time prior consultation is initiated, experience shows that key decisions have already been made and project agreements concluded,” it said.

As such, International River expressed concern over the Pak Bang dam and urged the relevant parties to suspend the project.

But Pham said: “It would be nice [to have a robust consensus vote like the previous declaration], but it may be too much … We need to look from the perspectives of the riparian members too.”