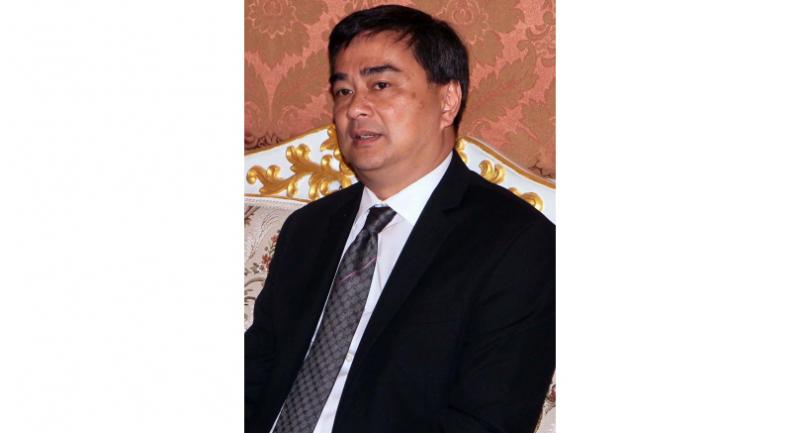 DEMOCRAT PARTY leader Abhisit Vejjajiva has called on politicians to embrace change in the New Year and revive the public’s faith in politicians, as the country approaches the last phase of the “road map to democracy”.

With the first general election after the 2014 coup set to take place this year, the former prime minister said voters would once again have a chance to make their choice. But if they made the same choice, they could not expect a different result, Abhisit said.

At a year-end press briefing, Abhisit said the focal point in politics in 2017 would shift from the Constitution and writing of laws to the general election. As the country steps into the third phase of the road map, it is not yet clear whether the election would take place this year or early next year.

Despite the new canon, the Democrat leader did not anticipate any major change in politics. He said it was related to behaviour more than rules and regulations.

“There are no guarantees. The problem facing the country is the [poor] enforcement of law and the political culture. If politicians don’t change and continue to exploit the loopholes in the law, the rules won’t mean anything,” Abhisit said.

The New Year and the resumption of democratic rule would give political parties a chance to prove they were a solution, not the problem, he said. But as the junta continued to restrict activities of political parties, Abhisit said the Democrats too could work only to the extent allowed by the rule.

The public focus, meanwhile, would be on how problems such as the bread and butter issues would be resolved after an election as well as how to prevent the same conflicts, he said.

He said pressing bread-and-butter issues, especially in the rural areas and among low-income workers, would resurface. Also, as the election draws nearer, people would begin to assess the extent to which the reforms had been effected, what has already been changed, and what the next move should be, Abhisit said.

“[Parties], therefore, must come up with plans for the future of the country as well as offer answers as to how they could foster well-being for the public,” he said. “And as the public demand grows more diverse, all the economic indicators just don’t matter –not as much as the actual price of the products.”

Abhisit also pointed out the Thailand 4.0 policies, which involved promotion of the digital economy, would not be relevant to everyone. And prior to the election, he hoped that everyone would be on the ball and formulate alternative policies to meet the varying demands, rather than being stuck with the old debate on the new laws and regulations.

The Democrat leader hoped that in the new year, a better economic foundation would be laid out for all the Thai people; that the country returned to democracy with everyone exercising their rights responsibly; and that people live in harmony in order to generate positive power for the country’s better future.

The National Council for Peace and Order should not lay out such a foundation on the grounds that politicians were bad and needed curbs. It has to lead the country to an election, Abhisit said.

He hoped the junta would alter its stance to prepare the people for the future. If not it would risk ruining all the efforts of the past years, as the situation would return to the same old cycle, the former prime minister warned.

He expressed confidence that it would be impossible to restrict the work of parties in the upcoming year. As soon as the new organic law on political parties comes into force, parties must convene and make changes as required by the new rules, he said, adding the parties would have more freedom.