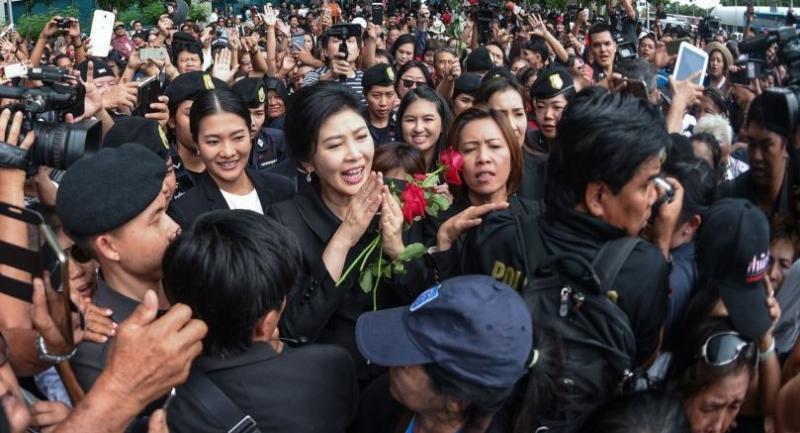 AUTHORITIES ARE closely following movements by certain groups of people ahead of the Supreme Court verdict in the case against former prime minister Yingluck Shinawatra scheduled to be read late next month, according to a source in the ruling junta.

Army commander-in-chief General Chalermchai Sitthisart, in his capacity as secretary to the National Council for Peace and Order (NCPO), has instructed the local peacekeeping forces to monitor the movements of “all groups involved” over the next month, until the verdict is issued, the source said yesterday.

The commanders of all four “army areas” in the main regions of the country have been assigned to make sure any suspicious movements are under their microscope, according to the source, who spoke on condition of anonymity.

If the local peacekeeping forces, which were formed after the military coup in 2014, discovered any plan to mobilise large groups of people into Bangkok, they would need to persuade their leaders to cancel such a trip, the source said.

“The forces should try to explain that the justice process must be respected. There must be no attempt to pressure the court with large numbers of people. Nobody must be above the law,” the source said.

After months of a trial on a case against Yingluck, the Supreme Court’s Criminal Division on Political Office Holders on Friday scheduled August 25 for the reading of its verdict.

The case stemmed from the previous Pheu Thai Party-led government’s corruption-plagued rice-pledging scheme, which was estimated to have caused at least Bt500 billion in damage to the country.

Military officers have been dispatched to different areas of the country in an attempt to persuade Yingluck’s supporters not to come to Bangkok when the court issues its ruling, the source said yesterday. They are going to meet with local community leaders and administrators and ask them to “create a better understanding” among the local residents.

“We ask for cooperation. There should be no mobilisation of the masses, otherwise there could be unrest in the country,” the source added.

All the groups of people involved should respect any decision by the court, whatever the verdict will be, he said.

“It remains unclear now if people will be mobilised from the provinces into Bangkok. The NCPO is monitoring the situation. It will be clear when the [verdict] is nearer,” the source said.

“We believe that part of the supporters travel here because they love Khun Yingluck and want to offer her moral support. But if it is not really necessary, they should follow the news at home,” the source commented.

Hundreds of Yingluck’s supporters gathered at the high court last Friday during the last hearing of the case against her.

Some Democrat Party politicians claimed yesterday that many of the supporters travelled together in an arranged trip from the northeastern provinces of Ubon Ratchathani and Amnat Charoen.

A large number of Yingluck’s supporters are expected to show up at the court building again on August 25, when the verdict is scheduled to be read.

Meanwhile, Somchai Sawangkan, a member of the National Legislative Assembly (NLA), said yesterday that he has learned of a plot to incite riots in a bid to overthrow the government and the NCPO.

“In August, the political situation will be volatile. The rice-pledging scheme case is high stakes and has high pressure. Some people want to show support for their political party ahead of the next election,” Somchai said.

“They will try to bring down the government and the NCPO through riots. Hard-core groups that are their allies have clearly said that they want to wage a ‘people’s war’,” he added.

Somchai warned that such a plot could lead to unrest and further damage to the economy and the country as a whole.

He claimed to have “information” that people from the North, Northeast and certain provinces near Bangkok would be mobilised to gather in the capital on August 1 when Yingluck is to make the defence’s closing statement for the case, and again on the verdict-reading day of August 25.

“They will try to mobilise as many as 10,000 people” for the August 25 gathering, Somchai said.