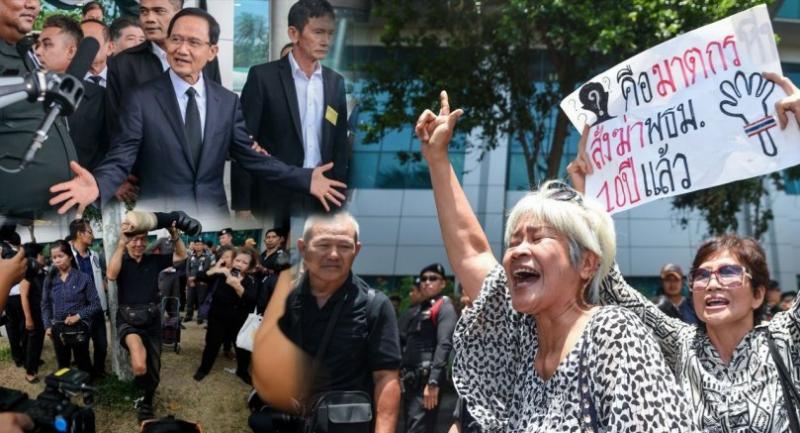 Yellow-shirt leaders call for appeal against 4 cleared over 2008 crackdown.

YELLOW-SHIRT leaders have called on the National Anti-Corruption Commission (NACC) to appeal yesterday’s acquittal of four defendants in a case stemming from the fatal 2008 crackdown.

However, the NACC – which brought the case to the Supreme Court’s Criminal Division for Political Office Holders after public prosecutors failed to indict the officials – yesterday said commissioners would need to carefully study the verdict before deciding on an appeal.

Preecha Lertkamolmart, an NACC member, said anti-graft commissioners would decide after studying the verdict, relevant legal points, witness testimonies, evidence and explanations by the court for the acquittals. Somchai is the brother-in-law of former prime minister Thaksin Shinawatra, while Patcharawat is the younger brother of Deputy Prime Minister and Defence Minister Prawit Wongsuwan.

The four defendants were accused of dereliction of duty and malfeasance by the NACC in 2015, which held them responsible for casualties caused by the police operation against protesters.

The court yesterday ruled that the defendants did not intend to inflict casualties in a legitimate operation that aimed to ensure that the Cabinet could fulfil its constitutional duty as well as protect individuals and state property.

The nine judges voted eight to one in reaching their decision, according to a source familiar with the case.

Suriyasai Katasila, a former leader of the yellow-shirt People’s Alliance for Democracy (PAD), yesterday asked the NACC in writing to appeal the verdict.

In his letter, Suriyasai outlined three points of contention that he said remained in doubt for members of the public. He disputed arguments that the dispersal of the protest had been conducted in line with international practices, that the demonstration was not peaceful or unarmed, and that the defendants had no intention of causing casualties.

Suriyasai also expressed concern that the verdict could set a precedent for authorities to deal with protesters in the future.

“It is unfair for most peaceful protesters to conclude that their protest is not peaceful simply because some participants carried guns, without the knowledge of protest leaders,” he said.

“I have had nightmares for the past nine years. The memories of the incident are still stuck in my head,” he said.

Veera Somkwamkid, another yellow-shirt leader, yesterday said that he disagreed with the court ruling and thought it could affect future protests.

“Think for yourself, who benefits from this ruling and whether the rights and liberties of the people will be affected,” he said.

Somchai, meanwhile, thanked the court yesterday for “serving as a reliable resort for the people”.

A group of people who had gathered outside the court shouted “murderer, murderer” when they spotted Somchai nearby. The ex-PM then headed back to the court building, where he was picked up by a limousine.

The courtroom yesterday was packed with friends and colleagues of the four defendants as well as PAD members.

Some red-shirt supporters showed up to give moral support to Somchai and Chavalit, both key figures in the Pheu Thai Party. Dozens of PAD members were also present around the court building.

Unable to walk past the hostile crowd, the four defendants had to take an alternative exit via the second floor of the court building.

In their 2008 rally, the yellow-shirt protesters and their umbrella group PAD surrounded the Parliament compound, preventing Somchai from declaring his government policy – a process required by the Constitution before his administration could begin running the country.

The dispersal operation left two protesters dead and 471 injured, according to the case file.

In a 90-minute verdict reading, the Supreme Court said the demonstration had not been constitutional, considering its violent nature and the fact that some demonstrators were carrying weapons and were aggressive towards officers.

It said the government action involving use of teargas was justifiable.

The measures proceeded from light to heavy, the court said, and because water cannon were not available, officers had to use tear gas against aggressive protesters to protect people trapped in the Parliament compound.

Although the use of tear gas inflicted casualties, the court regarded the four defendants who ordered the operation as innocent because they did not intend to cause injuries or loss of life.