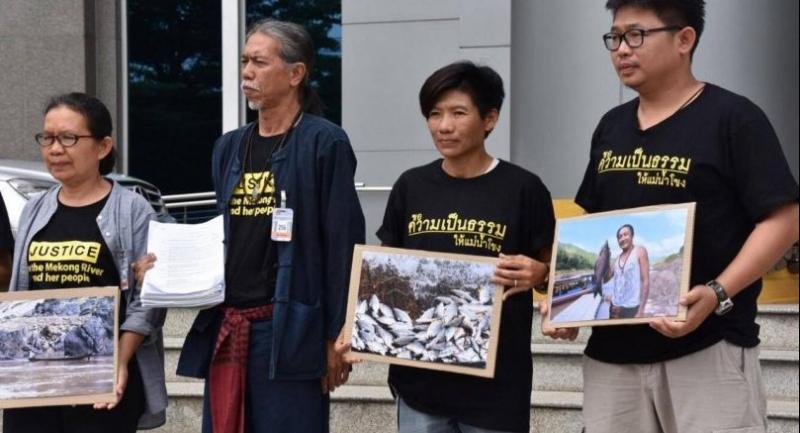 Niwat, the second from left, at the Administrative Court. File Photo/ Pianporn Deetes.

The Rak Chiang Khong conservation group will file an appeal against the Administrative Court’s dismissal of its complaint against Thai authorities involving the Pak Bang dam, the third dam planned along the Lower Mekong River, as they are worried about its potential impacts.

Niwat Roykaew, the group’s chairman, said they have received a letter from their lawyers informing them about the court’s decision to drop their complaint about the hydro-electricity project.

According to the lawyer, Sor Rattanamanee Polkla, the group filed a complaint against the Water Resources Department and the Thai National Mekong Committee in their capacity as the Thai agencies jointly responsible for the formal consultation for any development projects on the river under the Mekong River Commission, known as the Procedures for Notification, Prior Consultation and Agreement (PNPCA), part of the body's river governance.

The group claimed that the authorities failed to perform proper consultations with villagers likely to be affected by the dam, which is only 90 kilometres from Chiang Khong.

The group wants to see the agencies issue a regulation to guide their duties on this consultation process, regardless of the dam’s location outside the country.

Pak Beng, if built, was expected to generate 4,700 GWh of electricity per year, of which 90 per cent would be sold to Thailand and the remaining 10 per cent to Laos’ state-owned utility.

Niwat said the court’s dismissal reflected the fact that the real issue had not been addressed. In the case of Xayaburi, the first dam built on the Lower Mekong in Xayaburi province in Laos, it was clear to all concerned that the PNPCA was incomplete.

Niwat hoped that the court would see the same point as in the Xayaburi’s case, where the appeal was eventually taken up by the Supreme Administrative Court.

Niwat said the group would try to clarify the point in the new appeal that, despite its location, the dam would have severe effects on Thai citizens, and the responsible agencies must ensure that the people’s rights are secured under the constitution.