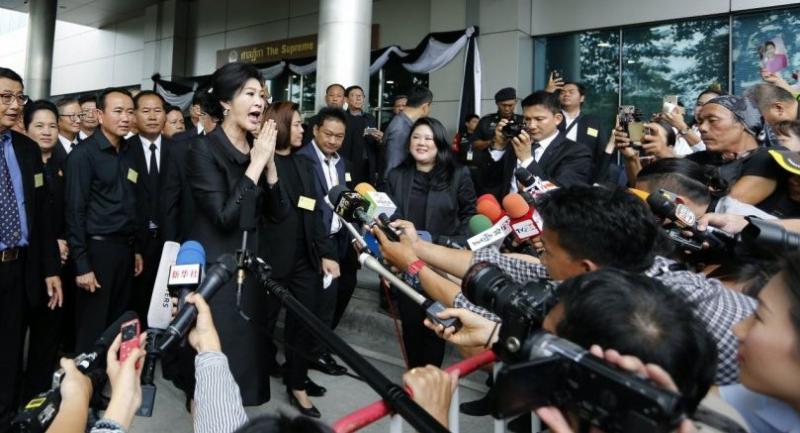 PRIME MINISTER General Prayut Chan-o-cha yesterday said he knew the whereabouts of fugitive former prime minister Yingluck Shinawatra although there was a slim chance she could be extradited.

It was the first admission from the military regime that it had located the runaway ex-premier.

While Thailand holds extradition agreements with several countries, Prayut said Thailand “cannot even bring a certain someone overseas back here”.

He refused to reveal where Yingluck was, saying that more details would be revealed after her verdict is read today, including whether her Thai passport would be revoked as a result of the ruling.

“I have my own spies. I have information but I can’t say it out loud,” Prayut said.

“Still, I need it to be verified.” Thai police also asked Interpol to cooperate with 129 countries in its network.

Prayut said there was still no update from countries contacted through Interpol.

He said that Yingluck had not, and was unlikely to, obtain political asylum status in any country.

Yingluck was accused of dereliction in preventing corruption and irregularities in her government’s controversial rice-pledging scheme, which was blamed for causing massive losses to the state worth Bt500 billion.

She apparently pulled off a dramatic escape a day or two before the Supreme Court was to deliver its verdict in the case on August 25.

The reading of the verdict at the Supreme Court’s Criminal Division for Political Office Holders was subsequently rescheduled for today. If found guilty, Yingluck could face up to 10 years in jail and a lifetime ban from politics.

However, questions have been raised about whether the court will actually read the verdict and what other consequences there could be.

If the court issues a ruling there are three possible scenarios. First, she could be found guilty with a sentence of one to 10 years in jail, a Bt2,000 to Bt20,000 fine, or both. Second, a guilty verdict could be rendered with a suspended jail term. Third, she could be found not guilty.

There had been debate whether Yingluck would be allowed to appeal a negative ruling.

While the new 2017 Constitution allows the appeal, the new law on criminal procedures against political office holders, which would lay out conditions for an appeal, has not been promulgated.

Yingluck is not expected to show up at court today. If she is sentenced to a jail term, another arrest warrant will be issued for her.

Prayut called for the public to remain calm after today’s ruling at the court. “It should proceed like every other case. No one should be alarmed,” he said.

He also asked the public not to judge quickly the three police officers who were suspected for facilitating her escape.

The officers might be found guilty of merely faking car licence plates, as Yingluck’s arrest warrant was not issued at the time of her apparent escape.

The National Security Council, meanwhile, said that fewer supporters of the former prime minister were expected at the court today, because they had been disappointed at Yingluck’s failure to appear at the court on August 25.

Council secretary-general General Thawip Netniyom said security forces should remain vigilant and were assessing how the court’s verdict would affect the country.

“[We] have to think of all the aspects of the verdict and try to come up with scenarios of what would happen consequently,” he said.

“However, we believe it will not spill over into violence as everyone will respect the court’s ruling.”

However, the fact-finding committee must first consider the evidence, he said.

Panurat also said that he was now heading the committee.

The two other police officers suspected of involvement in the former premier’s flight would be interrogated further as witnesses in the case, Panurat said.