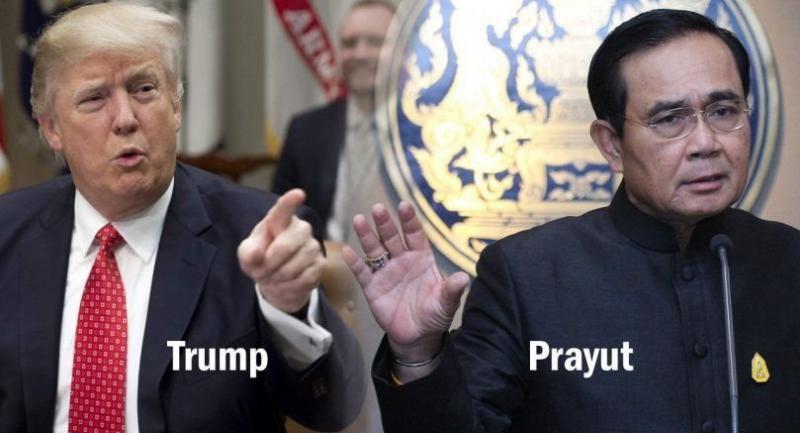 PRIME MINISTER General Prayut Chan-o-cha’s visit to the United States from next Monday to Wednesday will be carried out to accomplish bilateral goals amid high tension in the Korean peninsula as well as concerns among human rights activists that the visit will indicate US support for Thailand’s undemocratic junta regime.

Prayut was invited by US President Donald Trump during a phone call in April.

The schedule was confirmed by both the Thai government and the White House yesterday following speculation that the visit, originally proposed for July, had been postponed.

Trump looks forward to reaffirming the relationship between the United States and a “key partner and longstanding ally in Asia”, according to a White House statement. Prayut and Trump would discuss strengthening and broadening bilateral relations and enhancing cooperation in the Indo-Pacific region, the statement said.

Deputy Prime Minister Somkid Jatusripitak and the ministers of foreign affairs, interior, commerce and defence would accompany Prayut, he said.

The meeting comes ahead of next year’s commemorations of the 200th anniversary of Thai-US relations.

The Trump administration has been keen to bolster bilateral ties in East and Southeast Asia amid rising tensions over North Korea’s development of nuclear and missile arsenals.

“Doubtless Trump fails to realise that this propaganda victory for Prayut and the junta will come at the expense of the people of Thailand, who will pay for it in the form of intensified repression and human rights abuses when the general gets home,” said HRW Asia director Brad Adams.

Trump will be the second top US official Prayut has met after he shook hands with US Secretary of State Rex Tillerson in August. The meeting will also take place a month before leaders of Asean countries and their partner nations attend a summit in the Philippines.

The acting US Assistant Secretary of State for East Asian Affairs Susan Thornton has said the US wanted Thailand to crack down on North Korean companies in the Kingdom as well as put pressure on its diplomatic mission.

While the United Nation General Assembly appears to have done little to alleviate Korean peninsula tensions, Prayut said yesterday that he was not afraid that Thailand would be seen as leaning too much towards the US.