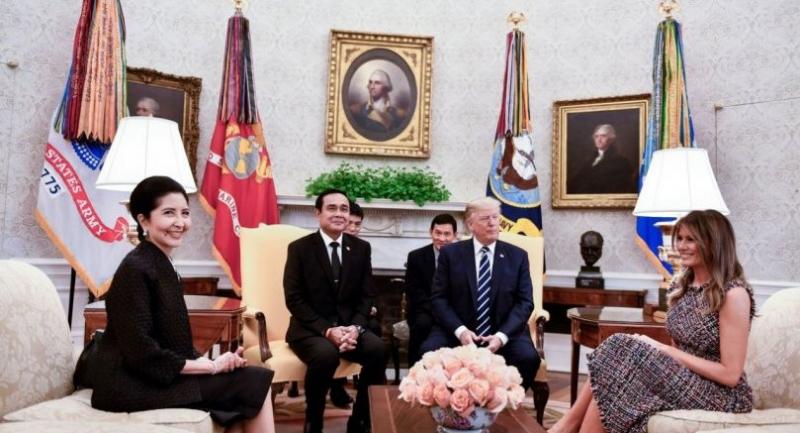 PRIME MINISTER General Prayut Chan-o-cha yesterday visited US President Donald Trump at the White House, marking revitalised relations between Thailand and the US and the announcement of several new deals.

While Thailand has focused on a Boeing investment to boost the Eastern Economic Corridor, the US looks forward to Thai investments in the gas and coal sectors, the opening of its domestic pork market and military purchases.

Prayut is leading a Thai delegation including Deputy Prime Minister Somkid Jatusripitak and top-level economic officials in a three-day visit to the US to meet with Trump, other senior US officials and the business community. The two leaders and their spouses met at the Oval Office at noon on Monday (1am yesterday Thailand time). While both leaders underlined cooperation in regional security, trade and investment, Trump made clear that the US was looking to improve its trade deficit with Thailand.

“It’s [Thailand’s] a great country to trade with. They make products and different things that are really very important to us, and we likewise sell to you,” Trump was quoted as saying.

“I think we’re going to try and sell a little bit more to you now, make that a little bit better, if that’s possible,” the president said.

Thailand ranks 11th among 16 countries on a watch list held by the Trump administration due to its significant trade surplus relative to the US. In the first half of 2017, the US trade balance with Thailand was negative US$11.45 billion (Bt382.7 billion), according to the US Census Bureau. While trade rebalancing is part of Trump’s much-vaunted America First policy, the Kingdom is certain that its “Thailand 4.0” policy is in line with the US policy.

“Both of the policies target people of lower income and aim for the better wellbeing of people,” said Deputy Spokesperson Lt-General Werachon Sukondhapatipak.

Prayut encouraged the US to be more open to Thai agricultural goods and facilitate Thai investors, whose $5.6 billion investment should help create more than 8,000 jobs in the US, Werachon said. Prayut and Trump also witnessed the signing of an agreement between Thailand’s PTTGC America LLC and JobsOhio on the development of areas in Belmont County, where Thai-owned petrochemical factories are located.

The US has sought likeminded partners in East and Southeast Asian regions to cope with rising tensions in the Korean peninsula. In July, US Secretary of State Rex Tillerson’s visit to Bangkok was reported by AFP as the US pressuring Thailand to ban state-run North Korean restaurants in the Kingdom as well as lessen diplomatic ties with North Korea.

On the escalating crisis in Rakhine state in Myanmar, Prayut said: “Thailand and the US will cooperate for humanitarian assistance.”

While giving financial assistance to alleviate the conflict, Thailand, like many Asean countries, regards the Rohingya conflict as Myanmar’s domestic issue. Prayut’s administration also recognises the Muslim minority as “Bengali”, a term used by the Myanmar government that infers that Rohingya are not citizens of that country.

In Bangkok, Deputy Prime Minister and Defence Minister General Prawit Wongsuwan said Thailand had plans to purchase helicopters from the US in deals that had been derailed by the 2014 coup.

But Prawit added that Prayut had not talked about military hardware purchases.

Regarding the development of democracy in Thailand, Prayut assured Trump that the election date would be announced next year, adding that a general election should be held 150 days after the announcement as stipulated by the current charter.

Prayut said he raised the issue of the election on his own without prompting by Trump.