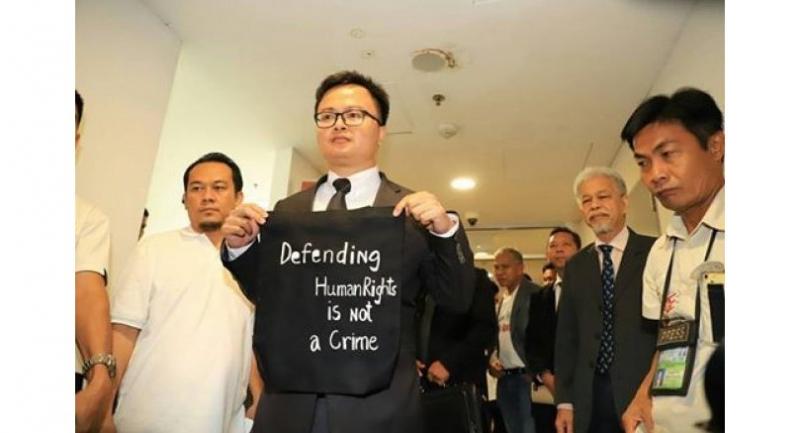 Human rights lawyer Anon Nampa appeared at the Technology Crime Suppression Division (TCSD) on Wednesday to acknowledge charges against him for court contempt and violation of the computer crimes law in relation to a Facebook post expressing views on cases involving student activist Jatupat Boonpattararaksa, known as Pai Dao Din.

Anon denied all charges, saying that he was merely exercising his right to freedom of expression. He was ready to request bail, he said, and he would maintain his stance to fight for human rights.

His lawyer, Somchai Homlaor, said that he observed the charges were not pressed by the Khon Kaen Provincial Court but by security officers.

Anon’s colleague, Natthasiri Bergman, also a human rights lawyer, raised a similar point, saying it should have been the court or one the judges to bring the charges, not the officers.

Even if the court had pressed the charges, Natthasiri expressed concern over its jurisdiction in the case.

Many activists showed up at the TCSD on Wednesday to show solidarity with Anon.

Anon has worked with the Thai Lawyers for Human Rights (TLHR), whose mission is to provide legal assistance for those prosecuted by the military-installed regime. Most were political cases involving the violation of junta orders.