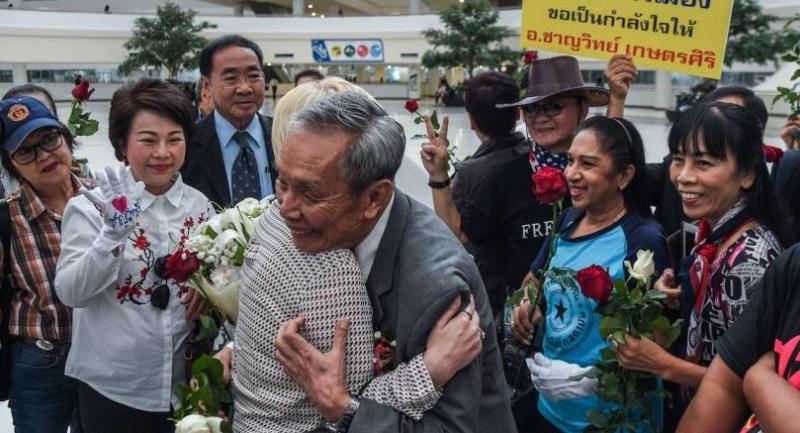 THE JUNTA yesterday cracked down with strategic lawsuits against public political participation as police summoned dozens of scholars and activists to acknowledge charges for their roles in criticising the military government by assembling to demand the “promised” election.

The dean of sociology and anthropology at Thammasat, Anusorn Unno, together with seven other activists, walked from Thammasat’s Rangsit campus to acknowledge charges against them at Prathum Thani’s Klong Luang Police Station. Anusorn, coordinator of the Thai Academic Network for Civil Rights, is charged with violating the junta’s ban on public gatherings of five or more persons, stemming from the “We Walk” march for civil rights and a series of seminars held at universities across Thailand.

Meanwhile, police yesterday summoned 39 people to acknowledge charges of violating the Public Assembly Act after they joined a demonstration last Saturday to call for a general election by November, as had been promised by Prime Minister General Prayut Chan-o-cha. Charnvit is accused by the Technology Crime Suppression Division (TCSD) of violating the Computer Crimes Act for allegedly sharing on Facebook a widely circulated post showing Naraporn, the wife of junta chief Prayut, carrying what appeared to be a Bt2-million Hermes handbag.

The historian Charnvit, who was charged for entering false information into a computer system that could “cause public consternation”, said he believed the case was politically motivated.

A strategic lawsuit against public participation (SLAPP), he said, could have been designed to stop him from criticising the ruling junta.

“This case is one of many such SLAPP cases. Only rulers in non-democratic regimes refuse to hear criticism. Or fear it, like the sound of the common house gecko, no matter how small,” he said.

The former rector denied all charges and petitioned for officers in the case to be changed because the current ones were under Pol Colonel Olarn Sukkasem, the officer who made the complaint.

Charnvit said he would submit further evidence regarding the case within 20 days.

Countless posts have been shared regarding First Lady Naraporn’s purse, which she carried during her recent trip to the White House in October, with many concluding that a locally made handbag had been confused with a Hermes bag.

But Charnvit, who shared the post with the question “How much is it?”, is the only one known to have been charged so far.

Police said he was charged because the historian was a “well-known person”, his lawyer Krisadang Nutcharas told reporters after more than two hours of questioning by officers.

It was the first time he had been charged after more than 40 years teaching at Thammasat University, Charnvit said, adding that he believed that he had not done anything wrong legally or morally.

The initial interview yesterday was also observed by the rights advocate and member of the National Human Rights Commission Angkhana Neelapaijit, with 20 people also present at the TCSD office in solidarity with Charnvit.

The 39 suspects in another case included the seven activists Rangsiman Rome, Sirawit Sereethiwat, Nattha Mahatthana, Anon Nampha, Ekachai Hongkangwan, Sukrit Piansuwan and Netiwit Chotiphatphaisal, who were summoned on Tuesday for allegedly violating the junta’s ban on political gatherings and instigating a disturbance during a protest last Saturday on the skywalk above the Pathum Wan Intersection.

Well-known junta critics such as Veera Somkwamkid and Sombat Boonngamanong were also among the 39 people facing charges. Police identified 66 more suspects who would be summoned to face charges later, according to Pol General Sriwara Ransibhramanakul, deputy police commissioner-general in charge of security affairs.

The rally site at Pathum Wan Intersection was a public area, so protests were prohibited under the Public Rally Act because it was located less than 150 metres from royal premises, he said.

The 39 people would be summoned to meet with police tomorrow to be formally notified of charges against them, Sriwara said, adding that if they fail to meet with investigators after being summoned twice, arrest warrants would be issued against them.