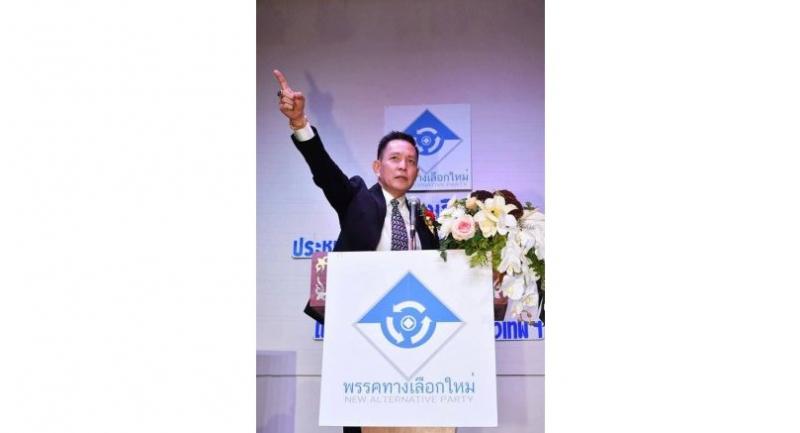 By POLITICAL DESK
THE SUNDAY NATION

AS THE FIRST NEWLY registered political party to receive the junta’s approval to convene meetings, the New Alternative Party has come under the media spotlight and been closely watched by political observers.

With the permission of the National Council for Peace and Order (NCPO), New Alternative held its first general assembly on March 24 at a Bangkok hotel.

In an interview with reporters covering the event, party leader Rachen Trakulwiang said New Alternative was not a military party and his party’s MPs would support the candidate of the party that wins the most House seats in the next election to become the next prime minister.

However, he added, if MPs could not agree on the next head of government, his party might support General Prayut Chan-o-cha to return to office when senators join MPs in selecting the new prime minister.

New Alternative aimed to win at least 50 House seats, according to its leader. The party’s slogan is “Dare to think, dare to do, and really do it” with the stated ideology of “Loving the country, religion and the monarchy and doing everything just for the people”.

Rachen, 55, said the party had been founded by a group of people who loved the country, religion and the monarchy and who wanted to defend the interests of Thai people as well as maintain faith in a democratic system with the King as head of state.

Rachen first came to the public’s attention as president of the Federation of Thai Defenders of the Monarchy. In 2011, he led a campaign against a group seeking to amend the lese majeste law in Article 112 of the Criminal Code. He has also filed complaints with police against several red-shirt leaders accused of insulting the monarchy.

In late 2013, Rachen joined anti-government street rallies organised by the People’s Democratic Reform Committee (PDRC), describing himself as a PDRC leader from Nonthaburi, his home province. Rachen also joined monk Phra Buddha Isara, a key PDRC leader, to organise a rally at Government Complex, but later withdrew from the effort.

Rachen has subsequently ended his role as a PDRC leader while continuing his role as president of the Federation of Thai Defenders of the Monarchy. He decided to enter politics two years ago and eventually turned the federation into the New Alternative Party.

A resident of Bang Kruay district in Nonthaburi, Rachen has several businesses in the province. His wife hails from the South.

“I volunteer to be the driver to steer the New Alternative Party to a great goal to work for the country. It doesn’t matter whether we will be successful or not. What matters is we must do something for the country,” Rachen said.

He announced his political intentions on Facebook, which he uses to communicate with party members around the country. He plans to hold Facebook Live broadcasts at 8pm every day to talk about the party’s activities, while the timeline on his Facebook wall shows that he has been visiting several provinces to set up party branches and recruit party members.

Those activities are surprising because the NCPO still enforces the ban on political parties, prohibiting them from carrying out political activities. But New Alternative has been actively recruiting party members, prompting opponents of the NCPO to think that the new party has strong connections with the junta.

While visiting provinces in every region, Rachen has promoted a policy to grant loans to registered homeowners, which he said would help them easily access government loans, which they would be allowed to repay at their convenience. He added that the project was not a populist policy like the revolving village fund project, but a “Thai-ism” undertaking.

He also expressed confidence that the policy would help his party win in the election.

His statement was straightforward, although he failed to make it clear that he believed his party had popular backing. New Alternative’s ambitions could trouble another prominent new party, Future Forward, a progressive alternative to traditional parties led by the young business tycoon Thanathorn Juangroongruangkit.