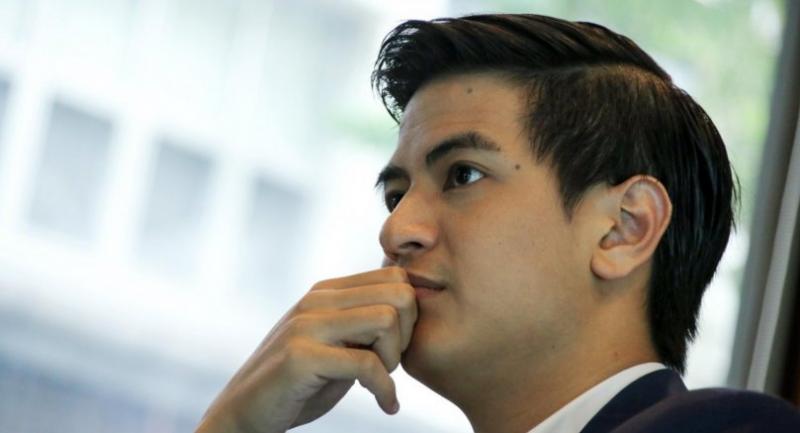 “I’M NOT the political legacy of anyone, especially Mr Abhisit Vejjajiva,” Parit Wacharasindhu firmly told The Nation during a conversation at the Democrat Party headquarters in Bangkok.

It is a place where the 26-year-old Oxon, publicly known by his nickname “Itim”, has not only trained himself but is also expecting to work as an MP once the country returns to parliamentary democracy.

According to critics, the ruling junta has striven in every way to ensure their continuation in power after the election. In countering the old-fashioned air surrounding the regime, and bored with the old faces long associated with key parties, Thais are increasingly looking to rising and new figures in the hope that they could more or less rescue Thai politics.

Parit, indeed, puts himself in this latter category. Young, educated in top British institutes with working experience in the development field, Parit has recently spoken in many public forums, selling his idea of promoting “liberal democracy” as a cure for what ails the country. Parit bears a significant resemblance to Abhisit, one of the political old faces that the electorate has come to love and hate.

But it is not just Parit’s face. Even his way of speaking and his demeanour reminds people of the Democrat Party leader.

When he was the premier, Abhisit brought the then 16-year-old Parit to “observe” how Government House functioned. The relatives, looking a lot like father and son, have made occasional media appearances together since then.

But Parit brushed aside accusations of nepotism.

“They would say that I will automatically enter the Democrat Party because of my background, but no. In fact, the party has the most democratic internal system I’ve seen so far. Unlike the others, the party’s leader is chosen from a contested election among branch leaders,” he said. “I happened to be born in Mr Abhisit’s family, I didn’t choose it,” he went on, flashing a charming smile. “All of this is the way I have chosen by myself.”

His reason to jump into the quagmire of Thai politics is one that is heard often but rarely practised – to be involved in the country’s development via policy-making processes based on academic research.

Among the issues that grab his interest are some that have been previously voiced by Abhisit, such as equality enhancement in Thai society, but also more modern concepts ranging from legalising LGBTQ to engaging with more technology at the party to national policy levels.

Parit would have to work this out with the country’s oldest party, one perceived as the most conservative. The Democrat Party’s image has a definite lean to the right and is seen to have joined hands with the coup-makers.

Worst of all, Abhisit and his then-deputy Suthep Thaugsuban – viewed as the most powerful Democrat figure – have not able to erase memories of the 2010 massacre when Abhisit was the PM and Suthep his deputy. Although the two have been acquitted legally, the public doubts the justice system and continues to condemn the two.

This means that in order to step forward successfully, Parit and the Democrats have a lot to do to clear the party’s name. Parit partially accepts some of the flaws.

“The Democrat and the People’s Democratic Reform Committee [PDRC] are two separate groups,” Parit clarifies. “The two agreed to object to the amnesty bill [pushed by Yingluck Shinawatra’s government]. I also supported the cause while I studied in the UK. The party, however, was not involved with the ‘shutdown’ event.”

The point that Parit makes has been long reiterated by Abhisit and the Democrats, that despite Suthep’s leading role in the PDRC and the active roles of some former Democrat MPs in the PDRC, the two parties are separate from each other.

For the 2010 tragedy, Parit briefly said that the justice process should “punish those responsible” and retribution should prevent such a scenario from repeating itself. He did not agree with the opinion that the party was conservative, arguing that the party has been open to the young generations throughout its seven decades “like how Mr Abhisit became the party’s leader when he was in his 40s”.

Parit, however, said the party would require some reforms and modernisation, including adhering to “liberal democracy” as the founding principle of the party.

“Our fight against corruption, against ‘tyranny of majority’, may have cast doubts among the public whether the Democrats will return to this principle,” he said, using the Democrats’ much-used phrase against its rival, the populist Pheu Thai Party. He wants a liberal democracy in Thai society to prevent the usurping of “power by the majority”. And the champion to lead such ideology, in his view, is certainly the Democrat Party in the modern era.

“We have a high numbers of branches across the country. This ensures our internal checks-and-balance system with decentralisation of power,” he said.

Unlike Abhisit, who has been criticised for allegedly avoiding military service, Parit will enter the Army next month following his voluntary enrolment last week.

He would be trained for six months, meaning he would be out in time for the general election, now tentatively set for February.

“The soldiers, the policemen, all sacrifice themselves for the public cause. The politicians are no different,” he added, before leaving to join a group of young Democrats who would soon make their debut alongside him.