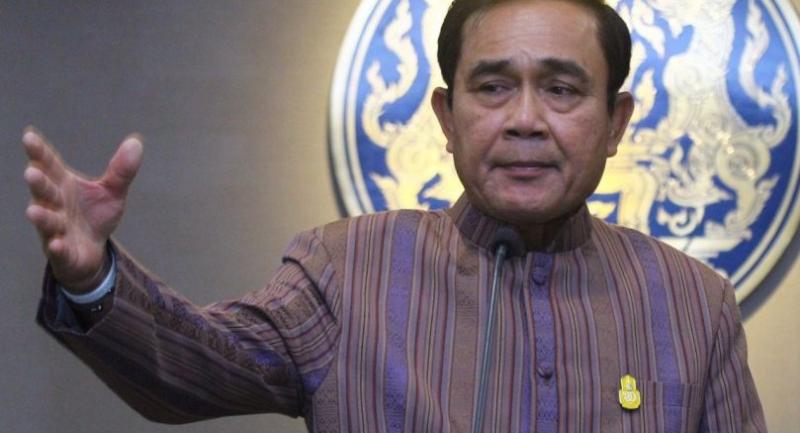 THE JUNTA chief yesterday played down any political significance of his visit to the Northeast next week, amid a growing perception that it was a part of his efforts to build up an alliance ahead of the next election.

Prime Minister Prayut Chan-o-cha said he had no plan to meet with any key politicians during his trip although he would not oppose their presence to welcome him.

“There is nothing special. I am not going to strike a deal with anyone. I don’t want to meet politicians,” Prayut told reporters.

“But I don’t want to prohibit politicians from welcoming me either. If you want to, do it. Do you think I can bar people from greeting me?” he added.

General Prayut, who also heads the ruling junta National Council for Peace and Order (NCPO), said he had not told politicians in the region to meet or welcome him.

Key government figures, including the PM and his deputies Somkid Jatusripitak and General Prawit Wongsuwon, have dismissed allegations by critics and major political parties that people in power are “sucking out” former MPs from those parties to a new party being formed to support Prayut’s return as head of government after the next election.

They claimed that those politicians had simply approached them, and that it was not the other way around.

Prayut has not ruled out returning to power. During his past working visits to different regions, he has often met politicians who are influential in those areas and have a number of former MPs in their factions or parties. Some politicians have become political appointees and their areas have been injected with state funds – moves viewed as “rewards” for those opting to join his future alliance.

General Prayut and his Cabinet members are expected to meet with many local residents during their two-day trip to four northeastern provinces starting next Monday.

A mobile weekly Cabinet meeting is scheduled to take place on Tuesday in Buri Ram during the trip to the lower northeastern region that also covers Nakhon Ratchasima, Surin and Chaiyaphum provinces.

On Monday afternoon, the prime minister is scheduled to meet local residents at the 32,600-seat Chang Arena football stadium in Buri Ram, a major landmark and the home of Thai Premier League champions Buriram United Football Club. The team is run by former veteran politician Newin Chidchob, who has maintained his political influence, particularly among politicians of the Bhum Jai Thai Party.

As Buri Ram is a traditional Bhum Jai Thai stronghold, the party’s leader Anutin Charnvirakul has said he and Newin would welcome the prime minister, who would meet some 30,000 people at the stadium.

However, Anutin denied speculation that his party and the ruling junta would make a deal during the PM’s visit. He was afraid of criticism from political rivals and other parties, Anutin said. Moreover, it would be too soon to make any deal long before the election, he added.

Anutin said he did not think Prayut wanted to talk with politicians during the trip either. “He is being watched even more than us. If he just disappears for five seconds, there will be so much speculation,” the politician said. General Prayut is scheduled to chair the mobile Cabinet meeting on Tuesday morning at Rajabhat Buriram University, where he will also preside over a meeting on social and economic development in the four lower northeastern provinces.

The PM will inspect the Buri Ram Airport later on Tuesday before returning to Bangkok the same evening, according to his itinerary.

Meanwhile, Nakhon Ratchasima authorities are set to request the Cabinet next week grant a budget for road expansion in preparation for a high-speed train project linking Bangkok and the province, Governor Vichien Chantaranothai said yesterday.

He said his province also would ask the Cabinet for funding for other projects involving agriculture, trade and investment, quality of life, and tourism.

In a related development, Prayut yesterday said he had instructed the Civil Service Commission (CSC) to allow politicians and political party representatives to attend a new course on leaders of change, with the focus on reform, national strategy and reconciliation.

The course normally is intended for civil servants and local administrative organisations.

“Political parties should send their representatives to join the training for knowledge about the bureaucracy. In the future, the political, bureaucratic and civil sectors will have to work together no matter who forms the government,” Prayut said.

The prime minister instructed the CSC to hold the course as soon as possible, preferably a few months before the next election, according to Methini Thepmanee, the agency’s secretary-general.