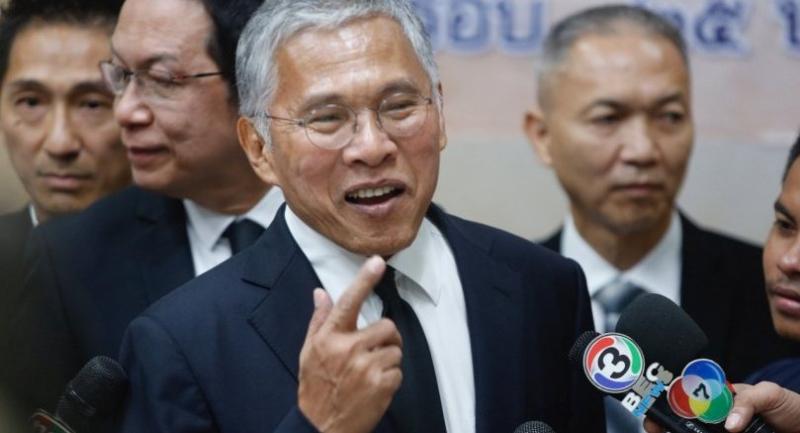 WATANA Muangsook, a key Pheu Thai Party politician, was yesterday brought to the Supreme Court’s Criminal Division for Political Office Holders for alleged malfeasance – the latest in a series of legal cases viewed by critics as politically motivated.

Watana, now 60, at that time was serving as minister of social development and human security overseeing the NHA.

Also sued in the same case are Mana Wongpiwat, a former NHA director who headed the project’s screening committee between 2005 and 2006, and 17 executives and employees of private companies involved in the project.

The court yesterday scheduled June 6 for both parties to hear a decision whether to accept the prosecutors’ case for trial.

Watana was yesterday released by the court on bail of Bt5 million, on condition that he would not leave the country without court permission.

Watana yesterday denied the allegation that he had asked for a bribe from the private companies involved in the project. He claimed the accusation against him was just an attempt to legitimise the 2006 coup.

The politician said he was satisfied that the requested bail was not high.

He said he was confident about the evidence he had. “This case is not complex. The NACC knows that. This case is meant as a political tool to harm our group,” Watana said, referring to the junta’s political enemies.

The scandal-hit Ua Athon housing project was first investigated by the Assets Examination Committee (AEC), which was set up after the 2006 military that overthrew the second Thaksin government. The case came after the National Anti-Corruption Commission took over when the AEC’s term expired.

Last year, the NACC submitted its investigative report regarding the case to the Office of the Attorney-General. Recently, Attorney-General Khemchai Chutiwong decided to indict 19 people found involved in the alleged irregularities.